It should have been difficult to catch up with a band with this much momentum.

Since their current lineup solidified back in January 2012, The Three Way has wasted no time in cutting broad swathes of dirty rock ‘n’ roll through the regional scene, from the downtown grid to Placerville and beyond. They’ve incited spontaneous table-dancing at sandwich shops in Rocklin, jammed in the midst of bar-fights in Portland, Ore., and have blown out more than one sound system along the way. Meanwhile, they’ve found the time to record a four-track EP (punchily titled Fourplay), an entertaining music video, and now a full-length album.

Luckily for me, I don’t have to crowd surf to get to these guys today. It’s a balmy Sunday at the tail end of March, optimal cafe weather, and The Three Way and I are planning to make an afternoon out of it. We end up at a sidewalk table outside of Crepeville on L Street, enjoying a few lazy sips of coffee, carrot juice and chamomile tea before drifting into our little chat.

To my right is Andrew Mundy, the drummer of the group. We toast with our matching carrot/orange blends before he upgrades to an IPA. Across from me is Joel Case, who currently supplies bass, vocals and occasional piano. On the left is Justin Forcione, lead vocalist/guitar, who’s reclining in his chair, wearing a leather jacket and bandana. He initially strikes me as a young Sons of Anarchy type, and as it turns out, he often gets around by motorcycle. I ask him what it’s been like to ride it in the hard rain we’ve been having. I imagine it feels like being the Terminator; he admits it kind of sucks. That’s the kind of impression I get about these guys—they’re all very down to earth, but aren’t shy from being badasses as part of their regular routine. Whether it’s Case’s knowledge of six or more instruments, or the fact that Mundy laid down the drum tracks for their first EP with a broken collarbone, I can’t quite put my finger on it, but I want to know more about the strange beast that is The Three Way.

The band’s story dates back to early 2011, when Forcione and Case were regular faces at the House of Hits in Arden, a 24-hour rehearsal facility for local musicians to practice, trade talent, and rock into the wee hours. The two clicked musically when Micah, a mutual friend in the insomniac milieu, began inviting them to jam sessions.

“Most of the people he recruited were eccentrics,” recalls Case. “One of them played a homemade instrument consisting of frying pans and drinking glasses. But one day, he said he met a guitarist named Justin. After he mentioned him a few more times, we scheduled a jam, followed by another, and another. They were great sessions. I knew instantly that I would love for it to become a project, although it wasn’t ripe yet.”

Some of this ripening, oddly enough, took place in a vineyard. Between the first suggestion of the project and the group’s first actual gig in March 2012, frontman Forcione spent eight months working on a grape harvest at a winery in Virginia, contending with the heat and the hornets with “stingers as big as horseneedles.”

When Forcione returned, the The Three Way hit the ground running, and after the first drummer departed the group following their inaugural performance, Mundy, who had been an audience member, was eager to join.

“It’s the band I’ve been waiting for,” he remembers, “…that stripped down rock ‘n’ roll feel that’s so open and allows for everyone to let their style of playing show through.”

Since then, the group has been unstoppable, popping up at Marilyn’s on K, Starlite Lounge and Ace of Spades, capturing new fans with every gig. They’ve joined up with members of ZuhG’s “cosmic family” for touring and festivals, and recorded their latest work with the collective’s J.R Halliday.

The group has played shows in the ZuhG Life store that once graced the Downtown Plaza. As they recall, that gig was beset by a plague of mall-cops with noise complaints. The band even blew out an entire circuit board at the annual ZuhGFest. As it turns out, their light, carefree attitudes may gel with the family’s laid-back vibe, but their music is another matter altogether.

The Fourplay EP brims with this brand of blow-the-doors-off energy. Tracks like “Crazy Legs” and “Electric Tambourine” burst with southern-inflected rock styles, hard folk and even trace elements of traditional jazz. Their raw power (and widening array of influences) continues throughout their new material, where everything from swing (“When You Get Tired”), power pop (“Something Better”) and dirty blues rock (“Slow Girl”) gets into the mix.

I begin to ask about this undercurrent of hybridization running through their undeniably hard-rock ethos. As Forcione explains it, everything goes back to the “three”: “Everything is three ways,” he says.

Every member brings something substantially different to the table. For himself, Forcione hits on the concept of the power trio as his part of The Three Way vision: classic groups like Primus, ZZ Top and even The Police that can create magic with the perfect balance of energies. Add in a healthy addiction to the blues and outlaw country artists like Johnny Cash, and you get a sense of this rip-snorting side to the group.

Mundy’s hard-hitting style is informed by his love of punk (The Misfits, Bad Religion, Alkaline Trio) and other extreme genres, and The Three Way affords him the chance to deploy some of these styles while showcasing his versatility. He also showcases a pretty impressive rock attitude. For the EP, he talks about having to take his arm out of a sling before every recording session, as if it were some sort of holstered weapon rather than a broken appendage.

For Joel Case, the musical DNA takes even sharper turns. He was raised on jazz, aided by a beatnik father who had lived through the ‘60s Haight scene in San Francisco and, with his mother, formed a household that was indispensable for the musically inclined Joel. Upright piano, clarinet, saxophone, flute, guitar, ukulele were always on hand. When asked if he brought some of this dense, Charlie Parker/Art Tatum-infused background to his current act, he remarked, “I think I bring the mentality of a jazz musician, if not the sound. I love it when Andrew and I find exactly the right beat… I watch him as closely as if we were in a jazz rhythm section together.”

With this wealth of ideas and stylistic divergence between the three, it’s amazing they can create music with such a powerful cohesion. The explanation? “We vibe alot,” Case says. The others nod in unspoken agreement.

For The Three Way’s album party on April 12, 2014, Case plans to join one of the opening acts, playing jazz piano accompanied by standup bass and drums in order to showcase his love of (and expertise in) the genre, and to provide a killer warm-up for the explosive set to come.

While all three seem content for the time to glean some well-deserved R&R in the breezy café setting, the conversational switch to the release gig stirs up a renewed excitement. “This show’s gonna be the shit man,” beams Forcione. “We’re pulling out all the punches. We’re playing some old, some new and maybe some sneak peaks to the next album after this one.”

The group had mentioned an eagerness to move ahead with recording some of the many new ideas that bode well for their future release. The three are all on a collective head-trip of pure rock ‘n’ roll creation, and the April 12 event represents another significant milestone in getting to that promised land.

“You can probably expect me to drop a few sticks, possibly spill a couple beers, and you can definitely expect to have a great time,” Mundy says of what to expect at the show. One more thing newcomers can expect: The chance to see a warm, welcoming and ambitious local group that keep their horizons far ahead, and their limits far behind.

Check out The Three Way’s release show at Midtown BarFly on April 12, 2014. They’ll be accompanied by the eclectic, funk-inclined Island of Black and White, blues/country purveyors The Soul Shine Band, Hans Eberbach and an array of other local talents. The price of admission ($10) will also get you a copy of the album. 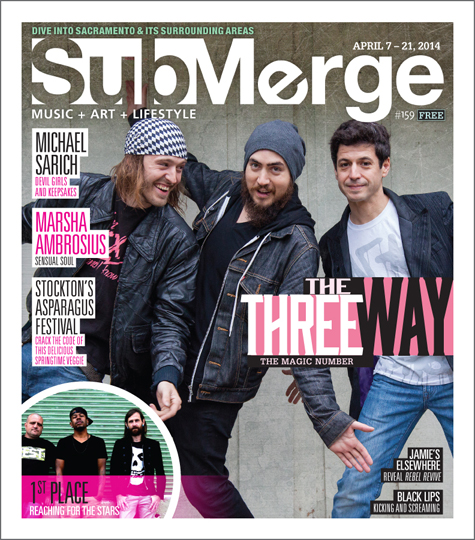