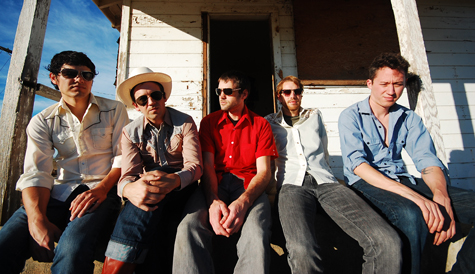 Friends who drink together stay together. That’s a saying, right? Regardless, it’s worked in the case of Nick Swimley and Adam Wade, who have been friends since high school. Two and a half years ago, they combined their shared love for music and formed The Golden Cadillacs, a Sacramento-based country outfit, which now stands as a five-piece band that includes James Neil on drums, Aaron Welch on guitars and vocals and Joe Davancens on pedal steel guitar and organ. Submerge spoke with Swimley and Wade as they were “just sipping on a few cocktails,” and they filled us in on the group’s origins.

The Golden Cadillacs’ roots spread as far as Placerville, where Swimley and Wade are from. The small town on the doorstep to the El Dorado National Forest may not be known for much; but like any town, it had a bar, which turned out to be an important landmark in the band’s history. Poor Red’s Bar-B-Q, located in neighboring El Dorado, is housed in a building that dates back to the mid-19th century. Both Swimley and Wade remember frequenting the establishment with their fathers while growing up.

“It was down the street from where I grew up,” Wade says. “It’s this real historic, funky old country kind of place.”

It was there that he and Swimley decided to form the band, while sipping (what else?) golden Cadillacs.

“We were drinking The Golden Cadillacs at the time, and all we had to do was basically look down and get that band name,” Wade says. Listening to the band’s music, it would seem like Jim Beam or Budweiser would be more apt alcoholic beverage complements as opposed to a frou-frou concoction of crÃƒÂ¨me de cacao, Galliano and cream; however, as Wade says, it could have been worse. “We didn’t want to be the Buttery Nipples,” he quips.

Poor Red’s wasn’t only The Golden Cadillacs’ birthplace, but it also served as inspiration for the band’s de facto first song. On Nov. 27, the band will release their first album, a nine-song self-titled effort, of which the opening track is titled “Poor Red’s.” Wade says he wrote the song while battling a bout of homesickness.

“It’s the first song I wrote,” Wade says. “I was living down in San Diego at the time, and I was kind of missing my hometown and wrote that song.”
Wade and Swimley have a long history of playing music together, even prior to that night at Poor Red’s. In fact, Wade reports that they played music together the first day they met. The two were introduced by friend and band mate Joe Davancens.

“I guess three of us”¦started jamming as early on as high school,” Wade recalls. “We all went our separate ways during our college years and went to schools in different states.”

Wade and Swimley reunited to play a show at the Cosmic Cafe in Placerville, and The Golden Cadillacs were born later at Poor Red’s that same night. However, at the time, the band was in a different form, performing as a three-piece.

“When it started out, it was just Adam, myself and my brother on drums,” Swimley says. “We made a little demo so we could get gigs. Joey was going to school in New York, but he moved back, so we added him to the band, and my brother kind of moved on to another group, and we hired our drummer, James, and then Aaron came in.”

Swimley says the current lineup has been together for about a year. He says the addition of the new pieces was “huge” in filling out The Golden Cadillacs’ sound, allowing them to do things that were difficult to pull off as a trio.

Their debut CD was recorded together as a five-piece over the summer in a barn on Davancens’ parents’ property in Placerville. Davancens had converted the barn into a studio, and the setting turned out to be a great place for the band to work. Without having to keep one eye on the clock and the other on their wallets as they would have at a traditional studio, The Golden Cadillacs were free to create at their own pace.

“They have a bunch of acreage, and they have horses out there and the whole nine,” Wade says. “We’d just go up there and drink beer and make music. Whatever came out, came out. They had a pool, and we barbecued. We got to hang out in the sun. It was a really relaxing experience. We just wanted to make sure that we got the sounds and the parts that we wanted.

“It was cool not worrying about who we were paying or who we’re working with or how much time we had.”

Having a band member who doubled as an engineer was a great boon as well.

“It helped to have Joey engineer all of it,” Swimley says. “He’s got a great ear, and I trust his judgment more than anybody’s.”

The result was a sun-baked country album that pays homage to the classic California country sound, a rich tradition that Wade and Swimley take very seriously. However, The Golden Cadillacs realize they have some way to go before they can be mentioned in the same breath as their heroes.

“We look up to”¦Buck Owens, Merle Haggard, Dwight Yoakam—all those guys who came out of California and played honky tonk country music,” Swimley says “We hope our next record will be more straight up country sounding. I think we’re just trying to find our feet with our first record.”

Maybe they’re still working out the kinks, but The Golden Cadillacs are off to a great start. In fact, they’ve already caught the attention of notable California country songwriter Dave Gleason. The Golden Cadillacs have recently become Gleason’s backing band, a major compliment considering Wade and Swimley were big admirers of Gleason’s music before ever meeting him.

Despite their work with Gleason, and though their first album hasn’t been even released yet, The Golden Cadillacs are already at work on their next release. Though their self-titled album was mostly a product of Wade and Swimley “boozing and writing songs” together, their next release will be more of a true band effort.

“The thing we’re trying to go for is the less-is-more vibe,” Wade says. “The whole vibe of the songs that we’re all so fond of is the real lyrics and the real life aspect of it. It’s like being a great chef, right? You don’t want to get too crazy on it. You just want to make something really simple and good.”

If their early returns are any indication, it would seem that The Golden Cadillacs have the right recipe for a strong future. At the very least, they should find bright skies and good times along the way.

The Golden Cadillacs will celebrate the release of their first album at The Fox & Goose on Nov. 27, 2009. The cover will be just $3, and Leroy Virgil of Hellbound Glory will also perform.