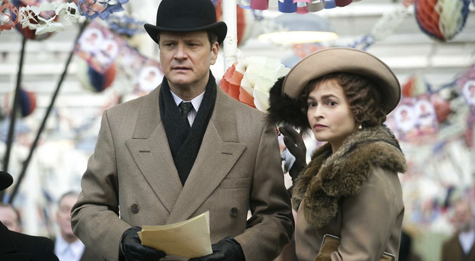 In the days before radio (or wireless as it’s referred to in The King’s Speech), leaders really only had to look the part. Their words may have been read or simply handed down from some appointed underling. As technology became more prevalent in the day-to-day lives of common folk, however, those in charge were faced with the problem of how they would connect with a populace better equipped and hungry for improved communication with their officials–be they anointed by popular vote or by God. The King’s Speech takes place at the dawn of the modern age–the time between the two world wars that laid the groundwork for the information deluge we wade through in present day. While it would be tempting to shackle allegorical significance on The King’s Speech, the film is thankfully too simple and sublime to shoulder such a burden.

Colin Firth plays Prince Albert (Bertie to his close relatives), a British royal with a crippling speech impediment. Despite his lofty title, Albert is an otherwise ordinary man with a loving wife (Helena Bonham Carter as the Queen Mother Elizabeth) and two young daughters. He’s a good father and husband, but his public life is not so pleasant. He has the potential to be a proud, capable–perhaps even great–leader; but pressure from his overbearing father and older brother has rattled his confidence. After the death of his father, King George V, and his brother’s abandonment of the throne to marry an American divorcee, Albert is thrust into the role of King of England with World War II threatening on the horizon.

At the center of the film is Albert’s relationship with speech therapist Lionel Logue, a frustrated Australian actor played by Geoffrey Rush. Elizabeth seeks out Logue when all other therapists have failed her husband, and he is sick to death of trying to fix his speech impediment. Logue’s methods are controversial, and he doesn’t seem at all intimidated by his new patient’s fame. The two enter into an uneasy alliance that eventually blossoms into a lifelong friendship as Logue helps Albert, now the newly ordained King George VI, get through his coronation and the speech as Hitler invaded Poland (thrusting England into war with Germany), a speech that would define his rule.

Rush and Firth have already been nominated for Golden Globes (Best Supporting and Best Actor respectively), and it seems that both should be odds-on favorites to walk home with hardware at either that ceremony or the Academy Awards. They’re a joy to watch in such rich and nuanced roles. Rush provides excellent dry wit and Firth exhibits such depth as a man on the cusp of greatness but unsure if he’s ready to take that all-important first step. His Albert is quick to anger, but easy to relate to and feel sympathy for. Carter is also as charming as always and shines in a role that could be easily marginalized with Firth and Rush in top form.

What’s so nice about The King’s Speech is that it’s just a movie with good acting and a clever, uplifting script. There are no car chases, shootouts, wild sex scenes or flashy digital effects. The climax of the film–a speech, if you couldn’t already tell from the title–may not be the most thrilling conclusion, but it packs a serious emotional punch. It’s a movie you can take your parents to and ensure that everyone will leave smiling. Jolly good show!