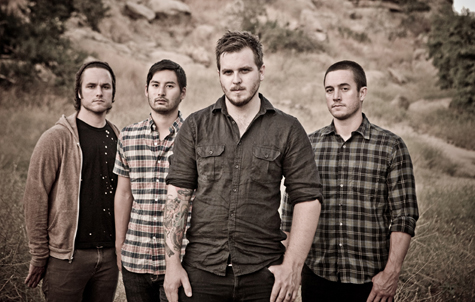 We are living in an era of immediacy. News is broadcast to us almost instantaneously regardless of where we are via laptops, iPhones and Blackberrys. Take a look around next time you’re in public and chances are you’ll see someone updating their Facebook page, Tweeting their thumbs off, or downloading an album that’s still months from release. We seem to have lost our patience, fellow consumers.

According to drummer Riley Breckenridge of the band Thrice, it’s “just a symptom of the modern era.” The southern California-based rock quartet’s newest album, Beggars, recently leaked to the Internet nearly three months before its original release date, shocking the band, fans and press alike. The early leak obviously threw a huge wrench into Thrice’s plans for the release of the album, which was originally set for Oct. 13. “Everything is immediate; everybody wants everything yesterday,” says Breckenridge during a recent conversation with Submerge. “They feel entitled to it and then there’s very little, if any, accountability. If people can do it, they’ll do it.”

On what Breckenridge thought was a normal morning in late July, he sat at his computer after returning from the gym for his “morning Internet and coffee.” The night before, the band had posted to their blog the first installment of a set of studio video updates that fans had been eagerly awaiting, and Breckenridge was curious to see how they were reacting to them. Upon logging in he immediately sensed something was wrong. Instead of the normal 80 comments or so from users, there were over 350.

“I was like, ‘Either people are really stoked on this video or something bad happened,'” remembers Breckenridge. “I checked it out and found out that [Beggars] had leaked.”

First the record popped up on file-sharing sites, then it started showing up in Google searches; it spread like wildfire. Breckenridge recalls, “It got to a point like halfway through the day where I was talking to our manager on the phone and we were just like, ‘Alright we’re fucked, it’s leaked.”’ He adds, “And it was a promo copy with voiceovers on it, which is even worse.”

The watermarked digital version of Beggars was supposed to be streamable for legitimate press outlets via a password protected Vagrant Records Web site. Breckenridge thinks someone with access to the label’s server and/or Web site’s back-end must have “found a way to hack through it.”

Instead of sitting around wallowing in their sorrows, Thrice and their business team hastily worked to get the release date pushed up. They announced relatively quickly that Beggars would be available digitally exclusively through iTunes on Aug. 11, which Breckenridge stressed “was the absolute soonest that we could make it available.” Just days later the band announced that the album would be physically available (along with plenty of bonus content to entice those who had pirated the album to actually buy it) on Sept. 15. The physical version will come with a download card that features five bonus tracks: two B-sides (“Answered,” and “Red Telephone”) that were recorded during the Beggars sessions, a recently recorded cover of The Beatles’ “Helter Skelter,” which the band has played live during their past few tours, and remixes of “All the World Is Mad,” and “Circles.”

“Our hand was kind of forced,” explains Breckenridge of the decision to beef up the physical release with so much extra content. “The B-sides obviously were going to make their way to people’s ears one way or another. The cover we weren’t really intending to do, but we decided that in order to make the actual physical CD a little more appealing now that it’s leaked and now that we’re expediting the digital release, it was important to have bonus content.”

Beggars was produced and engineered entirely by the band at Teranishi’s own New Grass Studios. Although Breckenridge admits he will miss the days when the band would “hop on a plane, fly to the East Coast and in two months come home with a record,” he says that recording at their own studio is gratifying and refreshing.

“It’s more comfortable because we’re home,” he explains. “To have our own studio and have a place to ‘go to work’ and then come home, it was really refreshing and I think it kept everybody’s spirits higher.” Breckenridge also points out that it’s nice to not have to stare at the clock when paying a studio, producer and engineer and think to themselves, “Damn, we don’t have the time for this, or, we don’t have the money for this.”

In its originally intended 10-track format, Beggars is a much different record than Thrice’s previous releases, especially their latest offering, The Alchemy Index, a four-disc concept album that was split between two releases. Beggars is very much back to basics for Thrice: two guitars, bass, drums, vocals and the occasional Rhodes piano. “It seems to me that it’s taking all of the things we learned and experimented with in making The Alchemy Index and then kind of trying to turn that into a cohesive record of 10 songs,” explains Breckenridge. “Instead of making it overly produced with loops and synths and all that stuff, we tried to keep it pretty organic and just band oriented”¦ This is just four guys in a room playing music.”

Breckenridge is quick to point out that the writing process for The Alchemy Index was very fragmented, “almost like putting together a puzzle.” For their newest effort, Thrice took an old fashioned approach to their songwriting process. “We were all just really excited about getting back in the studio and playing together, just the four of us writing songs the way we used to write songs, which is just to lock yourself in a room for X amount of hours and see what happens.” The result is an album that’s much more groove oriented than some of their previous material, which the band has described as having a “sleepy feel” to it. Beggars is an organic rock album that is sure to speak to long-time fans of the band and newbies alike.

Immediately following the digital release of Beggars, Thrice will hit the road and perform on the final five dates of Warped Tour, which will bring them to Sleep Train Amphitheatre on Aug. 21. “I like it, it’s fun,” says Breckenridge of Warped, a sort of punk-rock summer camp for bands. “We get to run into a bunch of bands that we’ve toured with or met in the past that we haven’t seen in a while like Underoath, Alexis on Fire and Senses Fail.” During his free time on the tour, one thing is for certain; you won’t find Breckenridge playing along to their song “Deadbolt” on the new Guitar Hero 5 video game in the tour bus. Although he admits he’s played the game “once or twice,” he says he’ll stick to the real deal.

“What you’re hearing and what you’re being asked to play on the screen is different,” he insists, ending our conversation with a description of what went down last time he played a Nirvana song on Rock Band: “It just wasn’t making sense in my head and I was like, ‘Fuck this, I’m going to go play my own drums.'” 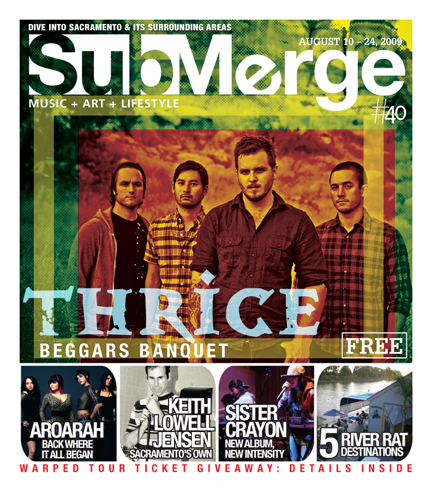