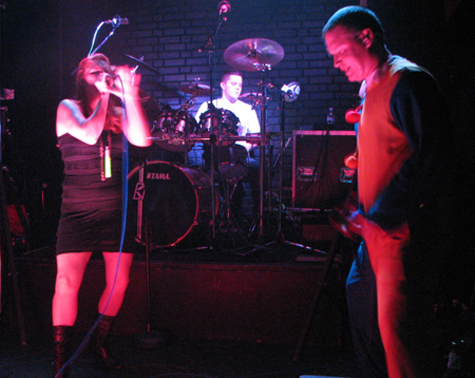 Utz! and the Shuttlecocks

Arriving fashionably late with just enough time to grab a drink before the Shuttlecocks come onstage, the crowd is simmering gently, warmed up and ready for the main act. Blue Lamp is your stereotypical venue: pricey drinks that are half the size as the last bar we visited and bartenders who furiously dole out drinks in attempt to keep up with the scene kids swarming around the bar. But, it’s a cozy atmosphere—brick walls and a classy-looking wooden bar, with a crowd that is more likely to start a dance party than a fight.

As the first notes from the band hit my ears, singer Sean Merold jumps across the stage—dressed in a clown suit? Turns out he is aptly dressed given his skill at entertaining the crowd as he and his female counterpart Debbie Niles take turns singing, firing off smooth musical chemistry as their highs and lows bounce off each other. Niles, a fiery redhead in big boots, is no wallflower, and knows how to rock the crowd in equal measure. Meanwhile, fellow band members Tony Whittaker, Michael Casagrande and John Hall are no strangers to rocking out.

Like a variety show taken to the max, this band knows their stuff. Rather than relying on over-played drunken karaoke cover songs like Journey or ACDC, the band impresses the crowd with a brand spankin’ new Coldplay song, “Viva la Vida.” From Coldplay to the Cure—with a little Kanye and Eminem thrown into the mix—it’s easy to forget that you’re listening to a cover band rather than the genuine article.

Midway through the show, as I coax a sound guy to let me climb onto a platform to snap some pictures, it hits me that the audience has grown in size, complete with a wedding party that ups the energy of the room tenfold. More than just performance artists, Utz! and the Shuttlecocks should be known as party artists, infusing the bar with power-packed jams and positive emotional energy. Everyone is dancing and screaming along. The end of the night winds down with some old school hip-hop before it’s time to pack up the instruments and call it a night.

It was a pretty seamless performance overall, and included juiced up renditions of too many songs to list. You may not know every song, but the hodge-podge set list this band puts together promises that whether you’re a rapster or a coffee shop maiden, you’ll find your groove during this show.