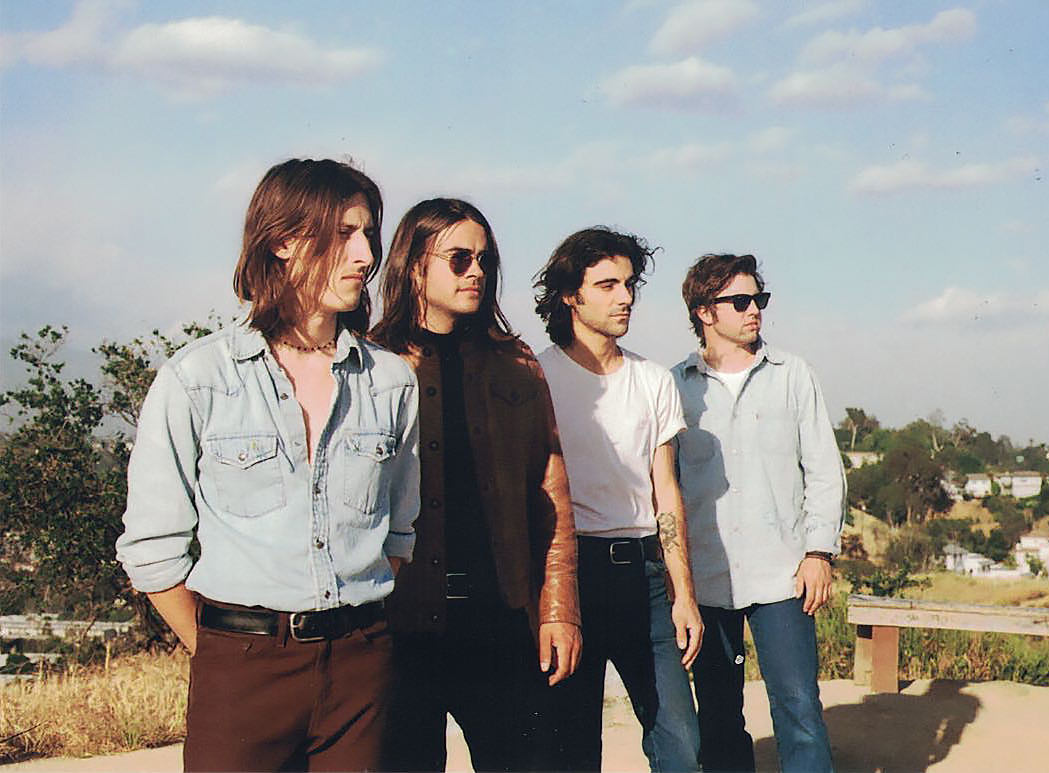 Ask any young band only a few years into their career to brainstorm the end-all fantasy scenario of classic rock gods with whom to share the stage, and the Stones would likely top the list of contenders. It’s a fantasy made real for Vista Kicks, four childhood friends from Roseville who set out for Los Angeles four years ago to make the big dream happen. Having already opened for The Kooks last year on a U.K. tour, and concluding this year’s jaunt across the pond sharing a bill in Hyde Park with Bob Dylan and Neil Young, they’ll have their biggest gig yet stateside in August opening for The Rolling Stones’ No Filter Tour in Santa Clara.

This sudden wave of fortune, as it might seem, was in fact years in the making. Sam Plecker (guitar), Nolan Le Vine (Drums), Trevor Sutton (Bass) and Derek Thomas (vocals) have known each other since preschool days. By the time middle school rolled around, they were playing music together; though already well-steeped in their classic rock obsessions, they initially began performing 1960s soul along the lines of Sam Cooke and Otis Redding, along with crooner material from Sinatra standards to Bublé hits. They took gigs as offered and never shied away from an opportunity to practice or gain familiarity with a new style, ingesting a massive chunk of the 20th Century pop canon in the process.

Between 2013 and 2015, they first got off the ground as polished indie rock outfit Babe, and began making waves online, especially among the high-school set, with songs like “Make it Real” and “Circles.” Not too long after they moved into a cramped one-bedroom apartment in Hollywood, on the precipice of their dreams, the four realized that if the journey was to be inspiring, they’d have to do it on their own terms. So, they let down their hair, let the old-school influences show and became Vista Kicks, a non sequitur that nonetheless manages to evoke their long-run view and the mellow, kickback music parties they’ve been known to throw at their L.A. studio.

As a new entity, Vista Kicks rapidly evolved into the prolific, genre-hopping band they are today. First came the surf-inflected EP Chasing Waves in 2016. On the cover of their full-length debut, 2017’s Bootyshaker’s Ball, the four put off a Badfinger-meets-Rubber Soul vibe in more ways than their appearance, pointing toward their magpie pop sensibility and rougher-edged rock proclivities that tend to gel excellently. On last year’s 18-track-deep Twenty Something Nightmare, Vista Kicks really spread their wings, lightly brushing their ballads and harder jams with everything from soul to country/western and tinges of psychedelia. For a band with the chops to pull it off, they revel in demolishing generic borders and taking on new styles. If they can be pinned to any one thing, it’s a time, not a style—a period from roughly 1968 to 1977 when rock performance, presence, instrumental virtuosity and songwriting was in full blossom. It’s a set of talents that’s gone far on putting them on stages with some of the greats of this time—classic, though still strongly contemporary in their youthful energy and in-the-moment concerns.

Below, we catch up with the four ahead of their upcoming appearance at Concerts in the Park (taking place before the big Stones gig). Come see them while you can still get up close! 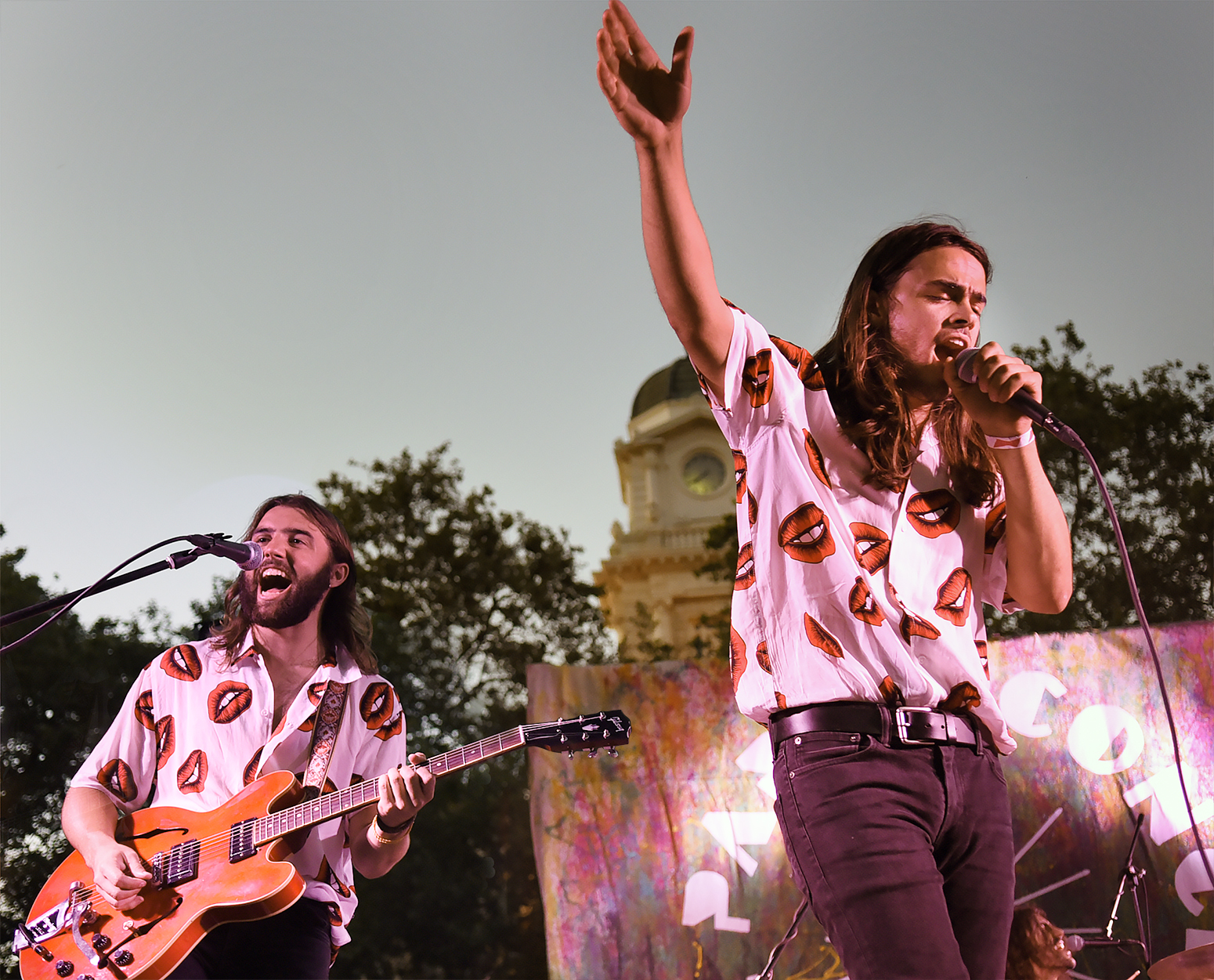 Concerts in the Park, 2017 | Photo by Melissa Welliver

How does it feel to be sharing the stage with your heroes?
Sam Plecker: It’s funny—when we started playing music together, it was always like, “We really gotta get this thing going, because one day, we could actually play with the people we’ve listened to our whole lives.” Now that that’s happening, it’s unbelievable—it is. We’re not that many years into this, and it’s already sort of happening for us, and it’s just insane. We’re very humbled by it.

How did you all go from being friends as toddlers to making music together?
SP: Derek and I met when he was best friends with my older brother. I was probably still like 4, or something. And I used to go with my mom to pick up my brother from school, and Derek lived across the street from the elementary school. After a few of our dads bought a few of us drum sets, we just got hooked on music. We couldn’t stop listening.
Trevor Sutton: I started playing bass around fifth grade. Derek got me into music around that time. Nobody in my family plays music whatsoever, so it was a very big curveball for them. But they were very supportive in getting me into it. I just started locking myself in my room and practicing bass and guitar, and oddly enough, banjo. Then, that’s what kind of led me into band class in middle school, where I met the rest. At some point after band class, we all realized that we knew each other. It took until late high school to kind of put all the pieces together, and say “Hey, let’s make a band.”
Derek Thomas: In high school we started doing Sinatra covers, Sam Cooke and Otis Redding stuff, and that was great, but high school ended, we went to college and when we split up, Sam went to Chico, Nolan went to Sac State, I went to [American River College] and Trevor went to Sierra. We didn’t play for awhile. Nolan and I kept doing the crooning stuff, but then Sam would come back in the summer, and we didn’t want to do the covers anymore. It was getting exhausting, because it was really just background music at these places. We felt that we’d done all that we could there. So we sat down and wrote some songs; the first one we wrote, during our first summer break from college was “Make it Real,” and then the pieces of the band came together around it.

What makes the 1960s/1970s rock era, the time of Young, Dylan and the Stones, resonate so powerfully in the present day?
DT: I’d say what makes us look up to some of the music giants like The Beatles and Bob Dylan, The Stones, Neil Young and all the rest that we’re obsessed with, is the fact that they’re making music from an honest place, and the reason they were so huge was because they were very honest music makers. They were making honest art. I think that, though there are plenty of musicians today who do that, in some sense the industry has become a much more business-oriented thing, where there’s a lot of people in it that aren’t making art. I don’t want to say that new music sucks, but I think the reason we really like 20th Century rock, soul, blues, jazz musicians, is because of their integrity in music creation first and foremost.

The title track “Twenty Something Nightmare” off of your last album seems like a final moment of doubt before turning the corner to success. What does the song mean to you?
DT: The song is about a lot of things, most of it was written out in one night, and then I kept plugging away at it for the next two months. Sam and I talk about this a lot—we talk about how Bootyshaker’s Ball, as our first record, is “We’re broke and we’ve got nothing but ‘fuck it’, let’s just have as much fun as we can.” And the other side of that coin is “Twenty Something Nightmare”—it’s kind of like the come-down, the moment of doubt where it’s like, “Oh shit, can we actually do this?”
SP: Naturally, when you’re going up like that, there’s always a comedown. To me that song feels like a conscious effort to come out of that, to triumph over the doubt and insecurity. It was written at a time when our innocence as a band was gone, and we understood that we’re climbing a hill, doing the impossible, and that there are far many more ways to fuck this up than we can actually do it right. But it’s also about acceptance, doing it anyway, persevering to do what you want to do and taking life by the horns, through all of the doubt and mischief that there may be.

Part of changing to Vista Kicks was to better represent who you are. Is there any outside pressure to change your music from album to album?
SP: It all changes organically, I’d say. I think what’s great is that we’re still an independent band. There’s no label pressure for certain music to be made or not be made, which is nice. But I’d say the pressure is still there to write nonstop, because now with all the exposure we’re gonna inevitably have with The Rolling Stones, opening up for other shows like that. We’re actually gonna have a shot, so we do feel more pressure, but in a good way. There’s more encouragement to make better music because more people will be looking. I think it’s putting a stride in all of our steps.

You’re not shy when it comes to mixing genres. Are there any others you feel like you’d like to feature more in your work?
SP: Maybe some Hank Williams [laughs].
DT: Yeah, we have an infatuation with country and western. I’d say the next record is gonna be even more diverse, a bit broader. That, and everybody’s seasoning into a better songwriter and performer, including Nolan and Trevor, so it’ll be likely that you’ll hear them sing a tune on the new record. We’re all a bunch of songwriters.

How would you describe the optimal musical education as a band?
SP: I think for the people who want to start bands, when you have a band where everyone is 100 percent in, they’ll skip work for a show. When they have that dedication, there’s a lot more that you can do that even a more talented band could not. When you have the commitment level and the trust there, the work ethic—once you get rid of the fear of “What if it’s not gonna work?”—then you can really start on making something happen. But that fear has to go away before anything else happens. The best thing you can do is find people that you trust, that you like, and work together, grow together. Just because somebody’s the best at something, doesn’t make them the best for the band.
DT: There are multiple paths to success with music, so you have to go with what resonates with you. Whatever you want to do, do it entirely. We wanted to make a band and we wanted to play our own songs, so we dropped out of normal life and lived in a car. Then all four of us lived in a one-bedroom apartment, and we had records for breakfast, lunch and dinner, and we studied, became better songwriters and hit the practice room for 12 hours, and that’s what you’ve gotta do if you wanna be a band that makes records of their own songs. You have to be able to make the sacrifice if you want to do it. You have to listen to yourself and push through any doubts.

Vista Kicks will share the stage with this other band you may have heard of (The Rolling Stones) on Aug. 18 at Levi’s Stadium in Santa Clara, California. Before that, though, you can see them live for free here in Sacramento at Concerts in the Park (Cesar Chavez Plaza) on July 26. Also performing will be ONOFF, For the Kids and A Summer Alive. DJ Nocturnal will grace the DJ stage. To get tickets for the Vista Kicks’ gig with the Stones, go to Vistakicks.com.