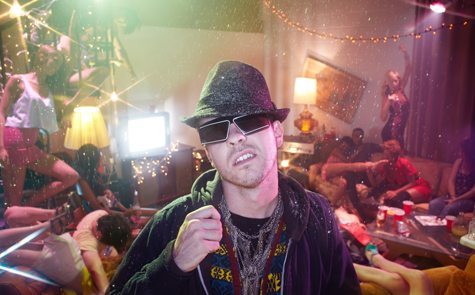 Anyone who’s ever started a band knows that the music business can be a tough and arduous road–even if you don’t have any aspirations beyond playing a few gigs and getting paid in free beer. If you stick with it, though, the rewards can be pretty awesome. Free beer, for one, is always good, but you could become a bona fide super star–or you could find yourself on any number of the rungs on the ladder of success in-between. If you’re looking for an example of sticking with it, look no further than Ricky Reed, the man behind Wallpaper, an Oakland-based electro-pop act. Reed started the project in 2005 as a sort of satirical look at pop music. Ironically enough, he now may be poised for some level of pop stardom in spite of himself.

With the release of Wallpaper’s latest album, #Stupidfacedd, Reed got the attention of MTV and even had the album’s single, the title track, played on the premier episode of this season’s The Jersey Shore. Maybe not the most auspicious venue to get his music heard, but it certainly opened some doors.

“Obviously, you have to be willing to deal with massive amounts of rejection. You have to be able to handle that,” Reed told Submerge over the phone from Los Angeles. “But when all these things came up, they were big and they felt good, but everything feels big and good the first time.”

Before his most recent breakthroughs, however, it was the small victories that kept Reed going.

“The first time that I played at The Press Club in Sacramento and had three to four attractive girls in the crowd, I thought I was winning,” he said. “The first time that I sold out Rickshaw Stop in San Francisco, I thought, ‘Wow, I’m doing it now.’ That’s the great thing about being a musician. As long as you work hard, in theory, things will get better, and every little milestone just feels a little bit better than the last one did.”

Reed’s recent successes have made him something of a sought-after commodity in the pop music world. Recently, he collaborated with Weezer’s Rivers Cuomo to write Cee-Lo Green’s new single “Anyway.”

“We took one shot at it, then took another shot at it, and the second shot knocked it out of the park,” Reed said. “Working with Rivers is crazy. I grew up listening to Weezer, and he’s a really special dude for sure.

“[Cuomo] came with an idea, and we just sort of built it outwards and it turned out great. He’s a class act. That’s the term to describe Rivers.”

When Submerge caught up with Reed, he was in Los Angeles, one night before heading to Las Vegas to play a show at Haze Night Club at Aria with Far East Movement. In Los Angeles, he was diligently working in the studio writing and producing. While he couldn’t divulge all that he was working on, Reed did tell us that he was putting the finishing touches on a new Wallpaper track. He shared some of the details on that and favored us with other words of wisdom in the following interview. 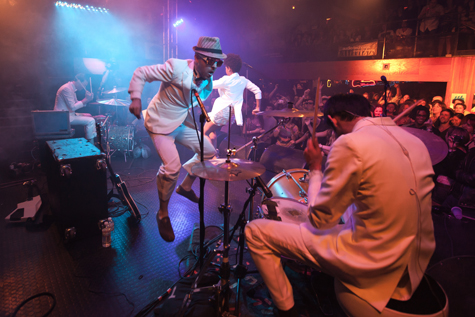 I saw that yesterday on your Facebook page you posted that you’re leaking a new Wallpaper song in a week or two. What’s that track about?
I can say that it’s sports related–jock jams. That’s all I can say about that.

Do you have an all-time favorite jock jam?
Oh dude, all-time favorite jock jam. There are so many good ones–from Gary Glitter… I really like whoa oh-oh-oh-oh whoa oh-oh-oh-whoa-oh-oh-oh whoa oh-oh-oh-oh… Whatever that one is [the aptly titled “Whoa Oh Oh” by Zombie Nation]. That’s a good one. You know what else is a good one? I’m pretty sure they put it on one of the Mortal Kombat themes, you know, “Gonna Make You Sweat” by C+C Music Factory. That was a weird time in music when pop house music was on the radio. Imagine being at a fucking Oakland Raiders game with all your tough cholo bros, and it’s like [singing], “Why waste your time? You know you’re gonna be mine.” The fucking ‘90s, bro. It was fucking unbelievable.

The ‘90s had all kinds of crazy things you’d never hear on the radio now. Like, Soundgarden was a pop band in the ‘90s.
Oh, I know, dude. You’re not going to hear “Spoonman” unless Dr. Luke produces it. I’d love to hear a Dr. Luke remix of “Spoonman.”

You’ve got the live show coming up at Ace of Spades in Sacramento. I was reading that your live show has two drummers and at least two other vocalists. Is that something you’d like to incorporate into the studio–having a bigger band?
In the studio, I just try to make the best songs however they want to be made. The live show, we’re trying to produce something special for people in that environment. There’s not a lot of carryover.

We’re going to do something even bigger and crazier for the Sac show. It’s going to be the debut of a new Wallpaper live set. It’s something nobody’s seen yet. We’re doing it that night and on New Year’s Eve with Kreayshawn in San Francisco.

Are you keeping that under wraps?
I want to keep that somewhat of a secret, but I will say that our live act is usually a four-piece setup, but the Sacramento show will be our first performance as a five-piece for those shows.

I listened to your album a couple of times through, and the first time, I definitely picked up on the beats and the energy, but the second time around, I was paying attention to the lyrics, I picked up on some really good lines in there, especially in “#Stupidfacedd” with that bit about the awkward silence. Is that something you throw in just to see if anyone’s paying attention?
You could definitely say that. I think my lyrical philosophy is just try to get people to pay attention to anything, you know what I mean? Like, hear something and realize you just heard it. Pop music is wallpaper. If you ask somebody what was the patterns or the colors on the walls of the rooms they’d been in today, of course they wouldn’t know what that is. They wouldn’t be able to answer you. That’s what pop largely feels like to me. People just run around with their thumbs up their butts, not paying attention to anything.

You say that, but Wallpaper’s music is obviously in that pop vein too. Is this one of those instances where you can be more rebellious inside the system than you can be outside the system?
I think you can stand on the outside and hurl rocks at it, or you can be the Trojan horse. I’ll leave it at that.

I wanted to ask you about the song you did with K Flay. I’d seen her play at a random club a while back. It was one of those instances where you go out and you don’t even know who’s playing and end up really enjoying it. I was wondering how that song came together and if you wrote it with her in mind.
Yeah, well I knew that K Flay was as broke as me… [laughs]. I wrote that record, and I knew it needed something. I think I met her just before that, and it was just the right timing. I thought, “This is perfect, why don’t you get on this?” She did a great job representing herself on that record, but she contributes to the song in such a great way. She’s just super talented and has also become a really good friend of mine.

Like you said, when you’re coming up you have to deal with a lot of rejection, but I’m sure that now that you’re making some headway, some of those nos are probably turning into yeses. How does that feel when that starts happening? Is it off-putting at first?
That was definitely the case. This sensation I feel pretty often is that I’m putting one over on people, you know? I know that my shit is dope, and I stand behind it, but also with how the rest of this stuff is, the rest of this stuff that you guys are signing off on–the powers that be–do you really think that you want to sign me? Are you really sure? Because I’m going to be a big problem for you guys.