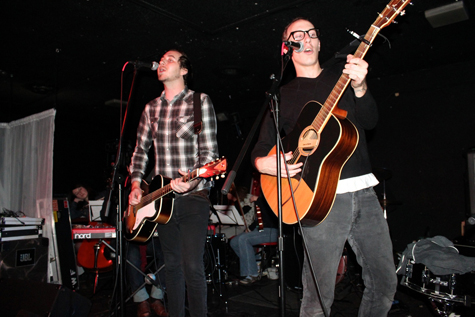 Let’s face it: watching two or more hours of the same genre of music rarely keeps the full attention of any audience, whether it’s thrashy punk rock or a dose of lulling acoustic folk. The jumble of bands playing Sunday’s show at the Townhouse, headlined by Sacramento’s Roman Funerals, provided a different kind of experience instead.

I was in the ladies’ room when I heard the drums of the opening band overhead, one hour past show time. I ran upstairs in time to see the five members of the Berkeley, Calif., band Winter’s Fall onstage playing “Anyways” from their newly released album At All Angles. Thirty-five or so people were fanned across the bar and corners of the room. Wearing button-down shirts and sneakers to fit the part, it was the first time the self-described Americana, indie folk rock band had played a show in Sacramento. I was immediately caught off-guard by lead vocalist Peter Stanley’s voice, which varies between a distinctly higher, somewhat nasaly quality like Jon Thor Birgisson in Sigur Ros and a lower range like the voice of The National’s Matt Berninger. The songs lasted four to five minutes, transitioning from upbeat guitar hooks to dreamy layers of guitars mixed with synthesizers and harmonized vocals, creating a full, soothing sound that was both folk and rock. Topped off with the sweet sound of a lap steel guitar and Stanley’s voice, their songs radiated country undertones. They played “Who’s to Say,” also off of At All Angles, and “Paper Chains” from their 2008 release Winter’s Fall.

X-Ray Press from Seattle eradicated every ounce of calm left in the room. The five-piece band pounded out a foreign genre that overlaps math rock, hardcore and punk creating a sort of ‘90s-meets-the-future sound. Despite their contagious, frenetic energy complete with head-banging and string tapping, the audience refrained from wriggling and writhing in front of the stage–maybe because they were in shock. Imagine beeping robot sounds composed to distorted guitars and intricate drumming, stopping abruptly to change the tempo two to three times within the same song, and you will have a vague conception of what this band sounded like. Lead vocalists Michael Pasuit and Paurl Walsh exchanged screaming and melodies over the various time signatures, sounding something like Brandon Boyd from Incubus singing over Dennis LyxzÃ©n of Refused.

Roman Funerals headlined the show, fronted by brothers Evan and Matt Ferro of the former Sacramento band Bright Light Fever. Several local performers joined them on stage, including Kris Anaya of Doom Bird and the Alternative String Band. The set began with “Change in Weather,” a haunting opener filled with heavy drums and melancholy guitar riffs. Their songs are lyrically rich and eerie, with the brothers delivering most of the words in harmony with a sort of raw intensity, joined by their acoustic guitars. “I go to sleep at night wearing all my clothes in case the rich kids come to get me. They’ll take me away to a house on the hill and tell me lies about American history,” were the opening lines of “Secrets for Sale,” followed with booming drums, tambourine shakes and echoing “ooh ahhhs” that the audience sang along to. The harmonies joined with the percussion sounded something like Fleet Foxes but with the darkness of a Neko Case song. The accompanying keys, played by Anaya, added just the right touch of mood-setting. They played all the songs from their EP Six of Us, in addition to a cover of the Doom Bird song “Shape of Hearts,” at which point Sacramento’s Alternative String Band joined in with cellos and violins. Only the brothers and the String Band remained on stage to play their final song, “Six of Us,” a melancholy song that they noted “is about our father’s daughter’s children.” The brothers thanked the crowd for sticking around past midnight on a Sunday night at the end of set, and, with an act of generosity, left a stack of 10 free CDs on the stage for the audience to take.