Word to Your Motherland aims to break down cultural barriers between South Asia, Africa and America

When Nisha K. Sembi and Mandeep Sethi last went to India, they met with a different kind of inspiration than what some might experience on the subcontinent.

Sembi, then a Bay Area graffiti writer and mehndi artist, landed in India on a mission to paint one of her culture-inspired pieces on a city wall (and also, as South Asian immigrants in America often do, attend a wedding with her family in the motherland). What she found were walls already beautifully tagged—far beyond even her own skills—by Indian youths using liquid paint and brushes but in graffiti style because they couldn’t find or afford spray cans.

“I came to the realization that hip-hop is more than just art, it’s a revolutionary tool,” Sembi says. “The caste system is still alive and well in India and all these people came together to battle each other in breakdancing, all these people who normally wouldn’t come together because of the different castes. Hip-hop breaks down those barriers.”

While on his own trip, Sethi, an MC, videographer and youth mentor, also collaborated with Indians who were part of the hip-hop culture in their country, and he filmed, photographed and rapped with them.

Both he and Sembi reached an epiphany.

“I realized my work has more value than just looking cool,” Sembi says, looking back on the experience and wanting desperately to share this connection between two distinct countries to break down stereotypes and barriers.

Sembi and Sethi grew up in California—she in Berkeley and he in Los Angeles—heavily influenced by hip-hop culture. The two stayed tied to their Indian roots but also branched out in different artistic ways to embrace their love of hip-hop, Sembi says, admiring five hip-hop elements: breakdancing, MCing, graffiti, DJing and knowledge.

“I connected with hip-hop because growing up as an Indian girl in America, it allowed me to connect to other people with similar struggles,” says Sembi, who has left the illegal realm of graffiti for a career in fine art, graphic design and social activism. 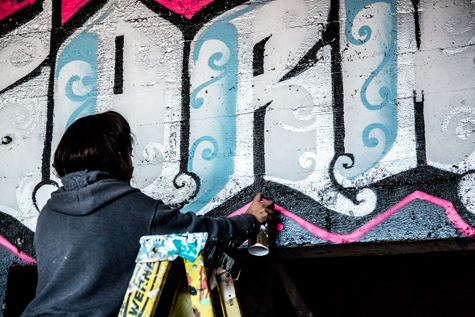 Sethi also used hip-hop to find a way to define himself.

Sembi says she met with the same problem, and both friends started to produce work that became a manifestation of their hybrid identities. Along the way, they found others who also saw hip-hop as a common denominator, and learned more of the deep-rooted relationship between their culture and the hip-hop movement.

For example, Sembi says, one of her inspirations for her artwork is Tupac Shakur and his Thug Life motto.

“Thug comes from the Hindi word ‘thuggee,’ which means thief, and it’s what the British used to call a group of Indians who rebelled during the colonization,” she says. “Tupac knew that because he was intelligent and well-educated.”

A more unlikely inspiration in Sembi’s life—her uncle—indirectly helped solidify her decision to pursue her aesthetic. As a teenager, Sembi remembers helping her uncle move out after he had just graduated from college and stumbling upon his secret graffiti skills.

“I snuck up to his room and the whole room was bombed from top to bottom with graffiti,” Sembi says. “I had no idea.” 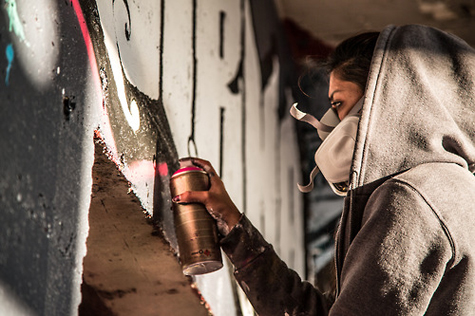 She later confronted him (he was reluctant) and found out he had been a graffiti writer in Oakland in the ‘80s, going by the name “Hero,” a comedic reference to Bollywood actors.

“There were generations before us who embodied this spirit, but never came to light, but with social media and technology, that’s all changed,” Sethi says.

Sembi continues fusing Indian and hip-hop cultures in her work, which has shown in the de Young Museum of Fine Art in San Francisco and multiple Bay Area exhibits. She still tags, but only legally with permission from building owners.

“There have definitely been circumstances where I’ve done painstaking pieces and had them painted over,” she says. “Seventy-five percent of the pieces I’ve done are gone. But within the last four to five years, I’ve transitioned to wood panels and canvases and I can actually sell those.”

“I’m 24 years old, so sharing my travels, sharing my experiences with folks younger and older can allow for an exploration of ideas,” he says, joking that his South Asian parents still want him to go to law school despite the success. “I think that it’s important to not only bring back resources to my people in India, but bring back their conversation here.” 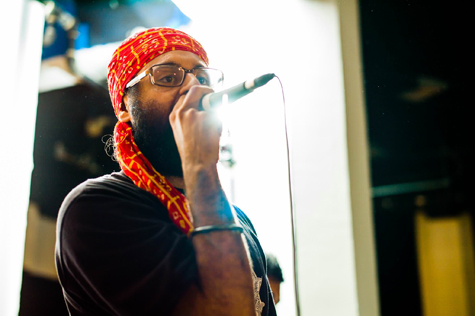 The duo set out to do just that, with the help of fellow hip-hop artists and family members, by curating their first multimedia show Word to Your Motherland.

The show, with Sembi as the featured artist, sets out to recreate an environment that visually, musically and aesthetically transposes the cultures of India and Africa and their people through the intersections with hip-hop culture.

The first exhibition ran in Oakland last year, Sembi says, when curator Anyka Barber asked Sembi if she would like to do her first solo show. The second run starts Feb. 23, 2013 at Sol Collective to celebrate the gallery’s eighth anniversary and recent Revista Siempre Mujer win.

“I thought, let’s use this opportunity to show people in America what’s going on in India,” Sembi says of the Oakland show, which was a success. “For this second one in Sacramento, we’re doing the same thing but instead of just India we’re showing the connection between India, Africa and America. It’s art as a tool for social change.”

Sethi says he wanted to build on the connection between India and Africa because the latter is seen as the original motherland, and the two used to coexist and communicate.

“We kind of lost that spirit so we are trying to inspire others to look inside themselves and rekindle that,” Sethi says.

Some of Sembi’s highlights will include a portrait of Tupac in the style of Indian truck art (part of a series) and political prints like one of Sikhs holding signs that read “Liberate Oakland.” She will also have a large mural installation of her graffiti work as a backdrop to musical performances by Sethi and others.

Guest artists at the show will include Sethi’s brother Puzzl3Peace, a photographer who works exclusively with 35mm film and has a series of shots from India; Eli-Jacobs Fantauzzi, a documentarian who covers hip-hop movements globally; and Sembi’s uncle, who agreed to create a few pieces for the exhibit because of his important influence on Sembi.

Sethi’s photos and films of his time in India with breakdancers, DJs and MCs will also be playing on two projections.

Word… will remain an ever-evolving show, Sembi and Sethi say, and the two hope to continue it in multiple cities. 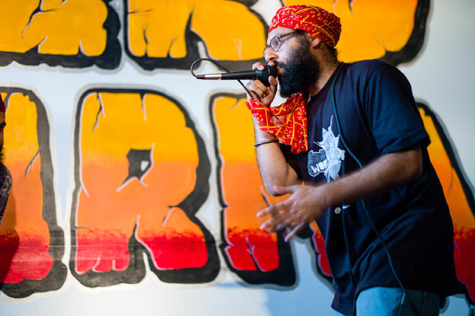