Survival of the Fittest

Oakland hip-hop duo Zion I (MC Zumbi and DJ/producer AmpLive) isn’t a group that will rest on its laurels, though it certainly could. Zion I released its now classic Mind Over Matter LP in 2000, and since then, both as a duo and teamed up with The Grouch, have put forth seven more albums. On Oct. 2, 2012 Zion I will put out their new release, Shadow Boxing, a sort of return to form after the live instrumentation of their most recent effort, Atomic Clock. Nine releases in 12 years is a prodigious output, but according to Zumbi, productivity is the key to survival.

“You have to these days, to survive, you have to go a little bit crazy,” he says.

Crazy or not, it’s easy to admire Zion I’s body of work. The fire to create isn’t only borne out of a desire to make music, but to make something different each time out. Compared to the live beats and the somewhat stripped down feel of Atomic Clock, Shadow Boxing delivers a much beefier, in-your-face sound.

“We decided we’d do a live album. It was a totally different energy,” Zumbi says of the thought behind Atomic Clock. “It didn’t even feel like a record, honestly, Atomic Clock, it just felt like we were doing a quick project. Shadow Boxing feels like something I feel. Atomic Clock, I felt it when we made it, but it’s not as deep of an idea around it for me personally.”

It’s not surprising that Shadow Boxing holds a deeper meaning for Zumbi, who has become a father in the time since Atomic Clock. He has also been getting into martial arts as of late as a way to improve his physical health. His still new fatherhood and his practice of tai chi play a heavy influence on the themes found on Shadow Boxing.

“The title of the album is referencing the battle of the self, self-affliction, but also like the confrontation of finding something wack within yourself and having the courage to look at it, be honest and conquer it,” Zumbi says. “It’s about embracing your inner-demons, but taming them.”

“I’m creative, but I have bad habits like everyone,” he explains. “What do they say? Idle hands are the devil’s play thing?

Zumbi also went back and referenced some of Zion I’s early albums when writing for Shadow Boxing. Though he says he doesn’t usually listen to the group’s past recordings, doing so this time around reintroduced him to the MC he was a decade or so ago. He liked what he heard.

“With the Mind Over Matter songs, I was like, wow, I was really in the zone,” he says. “I remember back then, all I did was rap, meditate and do capoeira. That’s it. I wasn’t chasing girls, nothing. The reward in life was to be in the studio and rap.”

What Zumbi heard was a hungry rapper. He made a conscious effort to put himself back in that headspace.

“I was like, OK, I was flowing better then than I am now,” he says. “I was really being honest with myself in some cases. I had to get back in the zone like that.”

Whatever his reasons, it certainly seems to be working. Shadow Boxing sounds big, mean, aggressive and even extremely catchy, as evidenced in the grimy hooks of the title track and the bouncy electro beat of “Human Being.” Beyond that, though, there’s a rich variety of tones at play on Shadow Boxing, from the house reggae-tinged “Sex Wax” (featuring Collie Buddz) to the smoothly soulful “Life’s Work” (featuring Goapele). Meanwhile, the over six-minute “Joe Frazzzier” stands out as a compelling centerpiece, a sort of hip-hop/prog hybrid. 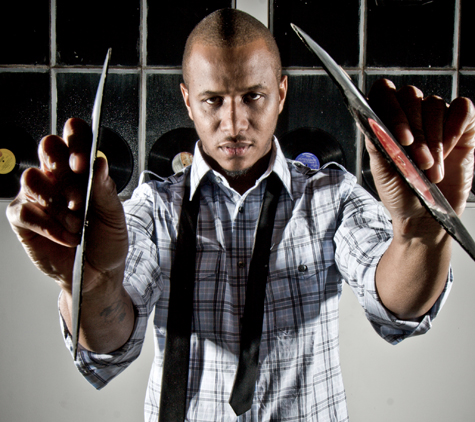 “That was just a crazy electro beat that I had, and [Zumbi] really liked it,” says AmpLive, who produced all but three tracks on Shadow Boxing. “He wrote something to it, but he sounded a little too far out, so I convinced him to do something more palatable. But then it lost its edge, so I wanted to just sort of bring that back.”

After the verses were laid down, AmpLive says the song felt a bit unfinished. Zumbi encouraged him to take the track further, to really draw it out. The producer was happy to oblige.

“I carried it out as far as it could go,” AmpLive says. “It got really crazy at the end, and I was like, we can’t end it like this, so I brought the music back so we could end on the same vibe.”

Though Zion I seems to revel in the fact that they can employ such a wide variety of sounds with success, AmpLive mentions that he’d like to try to have more uniformity to his songs.

“It’s more of a struggle to me to have everything sound the same,” he says. “I’ve been trying to do that a lot more. I do all kinds of different music, so I can do that easily if I wanted to, but I’m bored with changing it up all the time. My challenge now is keeping everything on the same wavelength.

“I think that probably for more of my solo stuff I’ll focus on that aspect of everything, maybe where everything is the same BPM or something like that,” AmpLive continues. “I just want to see what happens, because I’ve never done an album like that.”

This may come as a surprise to Zumbi, but if there’s one thing the MC has become used to in his years working with AmpLive it’s that the producer continues to amaze him.

“That’s what’s so dope about it,” Zumbi says. “I’ve known this guy for over 20 years. When you know anybody for that long, sometimes things become predictable, but that’s the beauty of the music. There’s always a surprise lurking. It’s always so fresh.”

Zion I fans will get the opportunity to hear the group’s fresh new songs on the road this fall during a 30-city tour with DJ Minnesota. In addition to that, Zion I will also be releasing a mixtape with the help of Brooklyn, N.Y.’s DJ J. Period called Bomb First. The mixtape will also feature A$AP Rocky, Kendrick Lamar, Action Bronson and others. Zumbi calls Bomb First a “family project.”

“If this was a battle for the soul of music, these are the people we would choose,” Zumbi adds.

Given the duo’s track record, it’s doubtless that there would be plenty who would choose to side with Zion I for the same fight.