With the closing of the ZuhG Life Store in the Downtown Plaza last summer, Sacramento’s esteemed Hall of Fame ska-reggae-funk mashup band ZuhG has experienced a bit of a proximity shift since its lead singer and guitarist Bryan Nichols moved up to Lincoln City, Oregon. Rather than folding under the separation anxiety, however, ZuhG seems to be thriving following Nichols’ move. Their touring capacity has now easily stretched up the Oregon coast and even seeps a little bit into Washington, where they say they’d like to frequent more often.

They haven’t stopped making music, either. ZuhG is set to release their sixth studio album, Field Trip, through a CD release party at Harlow’s on March 14, 2015. They’ll also be touring starting in Sacramento and heading all the way through to Seattle.

Before they could do all that, though, ZuhG had one final mission for February: Saving Private Bryan from his Oregon beachside bliss, and bringing him back to Sacramento to put the final touches on their album via 10 hours of studio mixing and mastering—which Nichols says is about 96 percent done by now.

So the band set out on their mission. But instead of simply going to Oregon and coming right back (like most of us non-musicians would do) ZuhG took a few detours along the way and decided to embark on an unannounced, unnamed spur-of-the-moment mini tour.

“We didn’t name it because it’s so short,” Nichols says of their brief musical excursion. “Usually we’ll make a poster and give it a little name, you know?”

“The Pick-Up-Bryan Tour,” bandmate and fellow guitarist JR Halliday interjects. “We pretty much went to pick him up, we come back and then we go to the studio.”

Fresh off of stops in Eugene, Oregon and Arcata, California, ZuhG played their last show at the Powerhouse Pub in Folsom on Feb. 21, 2015, testing some of their newer songs on the dance-prone audience and even jamming out with a local violinist during their set, before having to wake up early the next morning and hit the Pus Cavern Studios for some final tweaks.

Submerge was able to catch up with Nichols and Halliday before their studio session that Sunday morning to ask them everything we possibly could about Field Trip, their upcoming tour, their newest songs and where ZuhG plans to go from here. 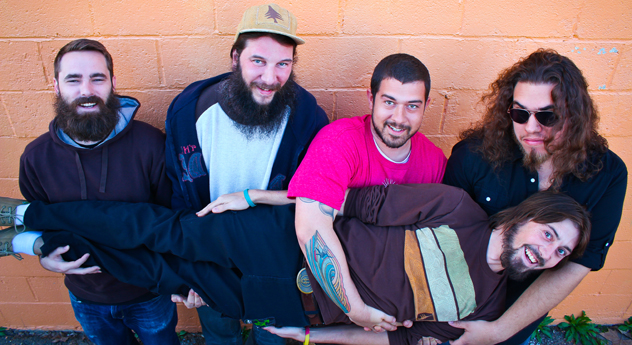 Why did you decide to name your new album Field Trip?
JR Halliday: Just going out on tour, you know? It’s like a field trip where you go to school and you get on the bus and you go off on a little adventure. It’s like little field trips. You know, it’s kind of what we do.
Bryan Nichols: I forget who said let’s make it that. But we were all like, yeah. Because like you said, we go on all our little trips and sometimes our tours are like two weeks long, so we almost don’t call them tours—we just call them trips. It’s like a field trip. Yeah, it’s very much so what we’re doing. You know what I mean? We’re like a group of friends, getting in our bus and going on a field trip. Like, “Let’s go to Eugene, let’s go to Arcata, let’s go to Seattle.”

I know you guys have a song called “The Hits” on your new album, which is about people requesting for you to play hit songs and famous covers. How did that song come about?
BN: So, I live in Oregon on the coast, you know, when we’re not touring. And I play this little restaurant gig a lot on the weekends, just in the corner of a restaurant. Like, people don’t really care I’m playing—I’m just kind of background noise, you know? But so often people will come up and to me and be like, “Hey, do you know any…” and I get the most ridiculous requests. Like Jimmy Buffett. “You know any Jimmy Buffett?” Or, “You know any AC/DC?” And some girl’s like, “You know some Bruno Mars? Or Adele?” Just ridiculous stuff that I wouldn’t sing. It’s like, “Yes, of course I’ve heard of that person before. But no, I’m not going to play an AC/DC song in this restaurant right now.” Nor do I know it… So it’s just a goofy song about that.

Bryan, how has your move to Oregon affected the band’s dynamic, if at all?
BN: I actually think this is working out better. I used to own a store in Sacramento called the ZuhG Life Store. And so after that store closed and just where I was in my life. I felt like I could finally move away and still make the band happen. You know? I would never leave until I felt like that—I mean, the members that we had and the way that we’d get down. So I saw my opportunity to move to the Oregon coast. I got a beach hut… I got lucky in a small little Oregon coastal town and I’m literally on the beach. It’s cool because now it’s opened up this whole realm of us playing in Eugene constantly and Portland and Seattle—just Oregon in general. We’ve just been tearing up Oregon lately as opposed to in the past, we were always going to San Diego and Hermosa Beach. We’re making our way up the coast a lot more, like every tour. So it’s cool because a lot of people when I was first moving there were like, ‘Aw, is the band breaking up?’ And I’m like, “No. Our band is just going to be playing more.”

So if anything, maybe the move up to Oregon has helped the band in some ways.
BN: I would say it’s broadened our reach. You know what I mean? We’re playing in other towns, and it’s nice.

I noticed from last night’s show that the band will just keep jamming sometimes, even if the original song is shorter. How much of a live set is pre-planned and how much is improvised like that?
BN: I mean, there’s definitely structure to some of the songs. Like, “Here comes Bryan singing a verse, or here comes a chorus.” But the bridges or the solos, who knows how long they’re going to be? You know? If Andre’s still shredding and he’s got his face on, we know not to go to the next part yet ‘cause he’s still in the middle of it. So yeah, there’s a lot of improv going on. But there’s also structure.

How’s it been after the ZuhG Life Store closed down? Do you miss it?
BN: I like to call it first and foremost a local music store. Like, we had a whole wall of just bands from Sacramento. So we were like a big merchant booth for that. And then it grew into music lessons and local art and shows in front of the store and local clothing companies. So local anything, you know? It was fun. I don’t regret it at all. I never thought I would own a store, and then an opportunity just kind of fell on my lap [and] I didn’t want to pass it up. It was great for the band, too. I like to think so many people in Sacramento just kind of know what ZuhG is or have heard of it because of that store… I had a lot of band members working there and helping out. It was demanding. You know, we were open damn near every day, during the mall hours we had to be open. So we only had a couple days and holidays [off]. It was super fun, and to see it go is sad, but I don’t miss owning a store. Although, I’ll drive by my Oregon coast town and see some building for rent or something. I’m always kind of like, “Hmm, I wonder how much that is.” I’m always kind of intrigued.

Is it possible that another ZuhG store could open up again, either here or in Oregon?
BN: It’s possible one day. I don’t have any plans right now, but I always think about it. And I got some friends who’d wanna do it too—like work there and sell their art and whatnot.
JH: It was very time-consuming, you know? We couldn’t just leave on tour. We had to make sure the store was covered. He was constantly on the phone talking to someone about some random thing for the store.

So, are you saying you’re happy that it closed down?
JH: I personally am. But I didn’t work there.
BN: Yeah, you didn’t do shit.
JH: I was like moral support. I’d show up, make an appearance.

Sounds like you’re more freed up to focus on your music.
BN: Yeah, it was definitely hard. Imagine going on a month-long tour and finding somebody to watch the store the whole time. It definitely frees up some time.

So what’s next for you guys? What’s your next move after this album, and where do you want to take ZuhG in the long run?
BN: Well, we’re always really excited about the festival scene. And we’ve playing a lot of festivals every time the time comes around. So we always focus on playing bigger and more festivals. That’s always it.

Do you see ZuhG going on a nationwide tour at some point?
JH: Absolutely.
BN: We have, and we’re going to again in October.
JH: Yeah, we’re going to Hawaii in August. So we just got five tickets.

Do you aim to be a touring band for the rest of your musical careers?
BN: Yeah. Bigger and better tours, always and constantly. The way I see it, for us to get bigger and go up to the next level, I want to go on tour with a band bigger than us and open for them every night. So I try to position ourselves to where we get to open for those bands, and one of these days one of those bands will be like, “Hey, I like you guys. You should come on tour with us.” I feel like that happens a lot. So that’s what I always try to do as far as getting to the next level. I try to find those opportunities for us, and hopefully it’ll work out.

Would you like ZuhG to achieve mainstream success and be radio-friendly one day?
JH: I think active would be a better word. Even if we’re making a little bit of money or no money, we’re still going to be doing it. We’ll stay play in our band and [ride] in our bus—whatever we have to get us from point A to point B.

Are you guys able to make a decent living doing music full-time?
BN: I got a beach house, man. We’re not rich, but you know.
JH: We all do our own thing, you know, our own little hustle to make ends meet as well…We don’t just rely on ZuhG to make our money and all that. At least us two.

So does ZuhG already have another project on its mind?
JH: Oh yeah. I’m already brewing up ideas upstairs. [Bryan’s] already got a bunch of songs that have been put on the table. But we gotta finish this one first. We started Field Trip before we came out with Calm and Clear.

Seriously?
BN: We had a drummer bail out. When we were recording Field Trip, one of our drummers quit. So then it just kind of turned into, “Let’s record an acoustic album with me and JR and our homegirl singer Jesi Naomi.” That’s basically all that’s on that album Calm and Clear. So we came out with that album because a drummer quit and we had all these acoustic songs.

I guess it’ll feel good to get this one out of the way then, huh?
BN: It’s been an idea for a long time, yeah. 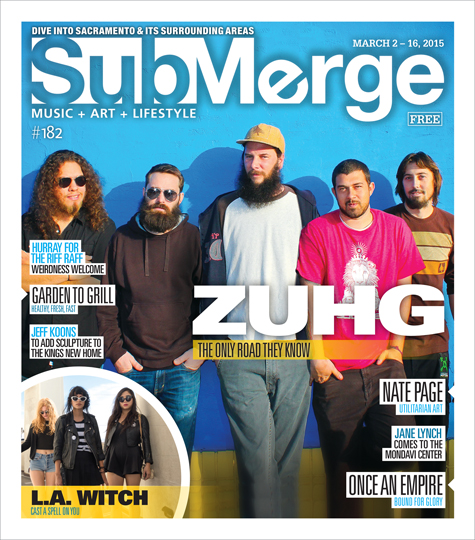