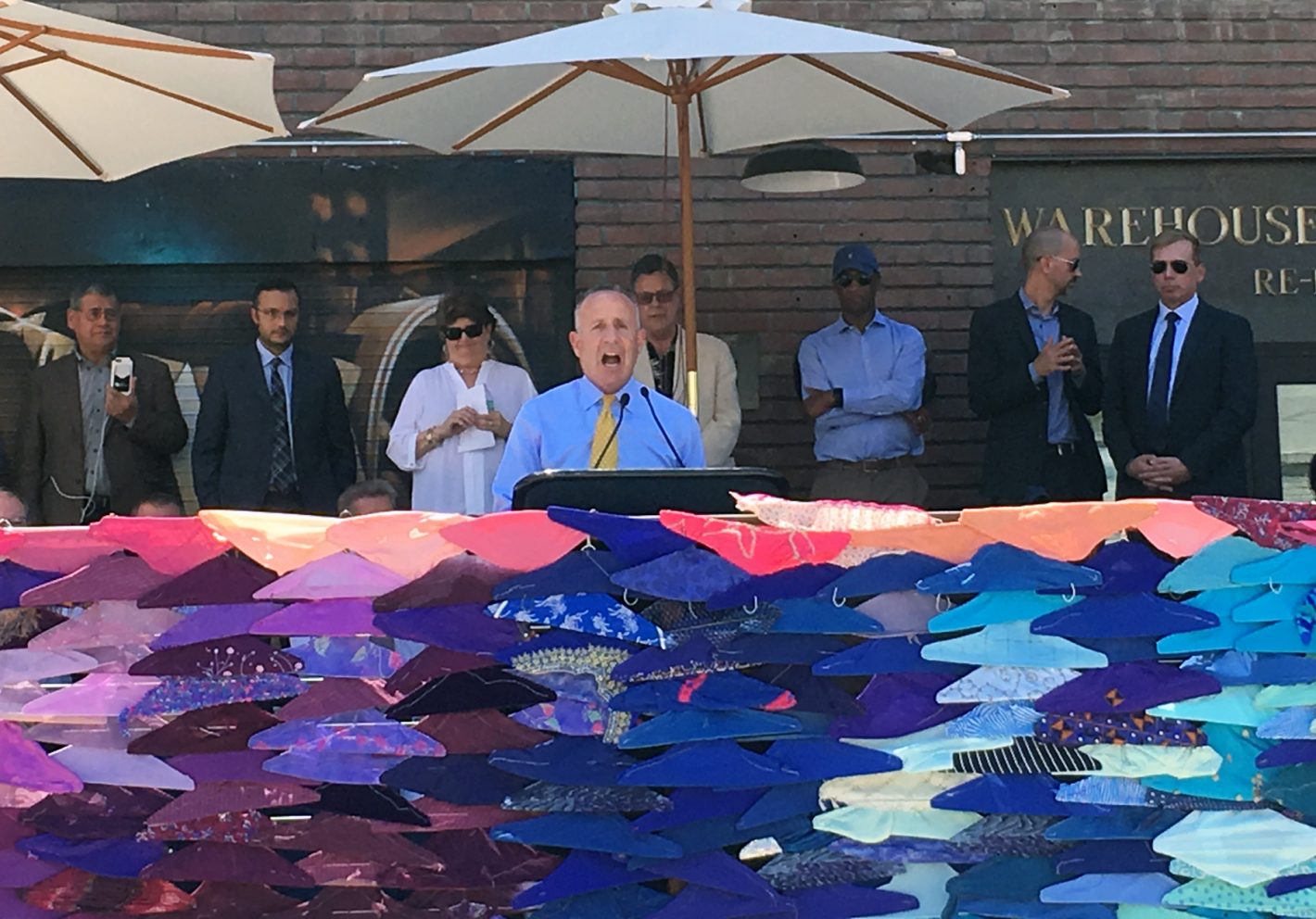 Earlier this week, Mayor Darrell Steinberg held a rally of sorts to make a series of announcements that promised to “ignite Sacramento’s arts and culture scene,” according to a flier promoting the event. A crowd of a couple hundred local artists, city leaders, street performers and arts enthusiasts gathered outside the Warehouse Artist Lofts on R Street, Sacramento’s current hot-spot for arts and nightlife.

After some introductions and performances, Mayor Steinberg took to the mic and got down to business. “We aren’t just the capital city, we’re a city bursting with capital,” he exclaimed. “We are in the process of establishing a new identity, our own identity, that maintains all of the things that have made Sacramento great, but says we intend to grow. We intend to thrive. We intend to be modern. And we intend to make this a destination city. A big part of doing so is to continue to reinforce and to build our reputation as an arts and cultural mecca.”

Over the next 30-or-so minutes Mayor Steinberg would go on to make six announcements relating to local arts, some of it new news, some of it stuff he’s talked about in the past that we frankly expected to hear. Anywho, here goes …

Announcement One: Steinberg wants to “re-stimulate and encourage the art of busking in Sacramento.” In other words, he wants to see more street performers around the City of Trees.

“It is a protected first amendment right to speak, to perform, to demonstrate and to share,” he said, pointing out that S.M.A.C. (or Sacramento Metropolitan Arts Commission, more on them later) now has an ad hoc committee co-chaired by David Sobon and Cecily Hastings, who will work with would-be local buskers to create a set of guidelines for street performers in Sacramento, and bring them back to the city to get things rolling. 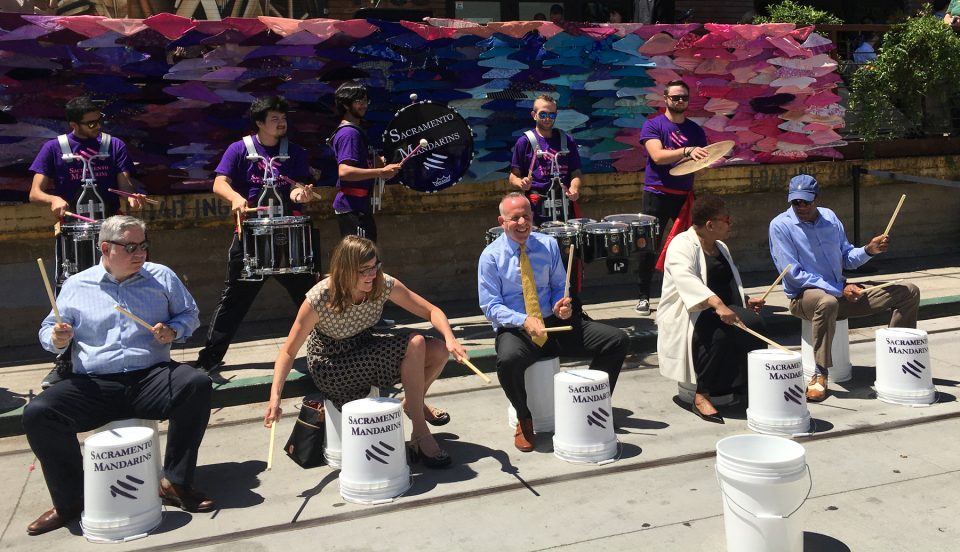 Announcement Two: The city will increase contributions to S.M.A.C. over the next two years to the tune of $500,000.

“Unfortunately, during the recession, the city had to cut back its contribution to S.M.A.C. and as such, to our arts community,” Steinberg said. “These were very tough times, but today we begin to fix that.”

The Sacramento Metropolitan Arts Commission is a long-standing public agency that supports, promotes and advances the arts in the region. Learn more about all of the important work they do at Sacmetroarts.org.

Announcement Three: The Mayor wants to put a heavy focus on arts education in city schools. “We’re going to ask S.M.A.C. to take as much of that increase as possible and to work with our school district partners, work with the broader community and let’s develop not only a road map, but the beginning of implementation in a much more robust arts education in our city schools,” he said. “We must take this issue of arts education seriously.”

Announcement Four: The application period for the Creative Economy Pilot Project, which we have previously reported on in Submerge, is officially open. This city initiative has allotted $500,000 (that’s in addition to the S.M.A.C. budget increase!) and will give out micro-grants up to $5,000 and larger grants up to $25,000 to “support projects such as pop-up events, art installations and street performances in Sacramento’s neighborhoods,” according to Steinberg. He urged local artists to “please apply,” adding that, “This will enable us to test, experiment and inform future city investments in arts, culture and economic development.” Visit Innovatesac.org to learn more about the guidelines and to apply for a grant. The deadline is July 30, 2017.

Announcement Five: The city and its partners are going to create a concrete, tangible “Cultural Plan,” or as Steinberg put it, “a blueprint for strategic investments in arts and culture here in Sacramento.” He went on to say, “The blueprint cultural plan will help us get the data for where to invest, how to build cases to leverage by the way corporate and personal philanthropy. We shouldn’t spend public dollars unless it’s matched in most instances two or three to one, especially when it comes to destination Sacramento.”

And finally, Announcement Six: The city has hired a new “arts leader,” Jonathon Glus, who for the last 10 years has been the president and CEO of the Houston Arts Alliance in Houston, Texas, and before that ran an arts program in Pasadena, California.

“This is a big one because, you know, it takes leaders to implement the vision,” Steinberg said. “We have successfully lured him back to California with an opportunity to create an arts capital right here in Sacramento.”

“Who says we don’t steal jobs from Texas?” joked the mayor.

Glus will be on board in mid-July to “help shape the arts and cultural plan and to build on all that we are celebrating here today,” according to the mayor.

Our new arts leader, Jonathon Glus, then said a few words about a recent visit to Sacramento and how much the city has changed (for the better) since he was last here many years ago.

“This town is amazing. The energy is unbelievable,” Glus said. “It is a gem, and arts and culture are the soul of it. I am so privileged to have the opportunity to work with you all to advance our city.”

After the mayor wrapped things up by giving a key to the city to legislator, lobbyist, activist and longtime supporter of the arts, Dennis Mangers, I caught up with local musician Dean Haakenson, who happened to be standing right next to me during the entire event, to see what he thought about everything the mayor had said.

“I think arts education is really important,” Haakenson said. “I grew up in Citrus Heights and there wasn’t a lot of funding in arts, and I wish that there would have been. I didn’t get to play music until after high school … It was nice to see all our regional leaders here, I liked it a lot.”

We’ll do our best to keep Submerge readers informed of future developments with the Creative Economy Pilot Project, the mayor’s push for arts education in local schools, what our new arts leader Jonathon Glus is up to and more. Feel free to email us with any news tips, thoughts, questions, ideas, rants, etc., to info@submergemag.com or find us on social media (@SubmergeMag) and message us on there.