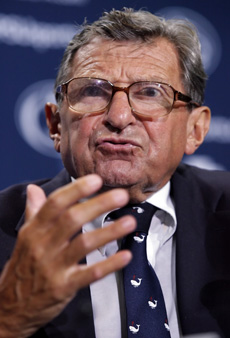 It’s amazing what power can do to people, even to those who seem above reproach. You may or may not be a sports fan, but you’ve more than likely heard something about the scandal that has devastated one of the nation’s most respected college football teams and perhaps one of the most beloved men in collegiate sports. And it’s a shining example of how the things you don’t do are sometimes more important than the things you do.

For 61 years, Joe Paterno has been a familiar face on the sidelines (or in recent years, in the booth) at Penn State football games. It was largely in part to him why I followed the Nittany Lions. Short, lumpy and of Italian descent, he could just as easily have been one of my uncles as he was an iconic football coach. More than just a great coach, leading his team to many successes, he was a great molder of young men. Penn State has produced plenty of professional football players over the years–especially great linebackers–but more importantly than that, Paterno, or JoePa as he had become affectionately known in State College, Penn., seemed to be more concerned with preparing his athletes for life after football than his own prestige and accolades. Still, Paterno amassed 409 victories, the most in FBS (Football Bowl Subdivision) history. When his Nittany Lions earned the coach his 400th victory in 2010, Big-10 commissioner Jim Delany said of Paterno, “When they write the history of college football in the second half of the 20th century–and maybe the first half of the 21st century–he will be regarded among the greats. I’m not talking about just football or just college. I’m talking about one of the great coaches in the history of American sports.”

Unfortunately, we’ve learned far too often that being great at what you do doesn’t mean you’re a great person. Now, Paterno and Penn State University are in the eye of a scandal involving sexual abuse of children and a cover-up that lasted almost a decade.

Jerry Sandusky, a similarly decorated defensive coach whose 23-year tenure under Paterno at Penn State ended in 1999, has been charged with multiple counts of sexual assault that could put him behind bars for 460 years. One such incident is purported to have happened in 2002 in the Penn State shower room. Though he was gone for three years, Sandusky still had access to the university’s athletic facilities. According to the grand jury indictment, then-graduate assistant Mike McQueary walked in on Sandusky raping a boy believed to be around 10 years old. Instead of calling the police or, you know, tackling the asshole to the ground and beating the shit out of him, McQueary left the scene to call Paterno, who then called campus police. And that was that–until now.

After the story broke, people were fit to be tied, for obvious reasons, but those defending Paterno were equal in fervor. Students staged a demonstration in support of JoePa when he announced that he would retire his long-held position at the end of the football season. The next day, university officials finally removed their thumbs from their asses and fired Paterno, which set off a riot on campus. School president Graham Spanier has also been fired as a result of this horror story; however, McQueary somehow still has a job with the university and as of the writing of this article has only been placed on “administrative leave.” WOW.

I’ve been cursed with a strong sense of empathy. I can imagine Paterno and company’s side of the story here. He has stated that the incident wasn’t explained to him in the same excruciating detail as McQueary relayed to a grand jury, but even if that wasn’t the case, and God or whoever forgive me, I can still understand where Paterno was coming from. Getting news that a trusted colleague and companion has all along been a psychopathic monster had to have come as quite a shock; or, at the very least, sort of like the time you heard Santa Claus didn’t exist. Sure, you kind of suspected it, but how could you be sure. In any case, believing in the good far outweighed accepting the bad. I think if I were in Paterno’s shoes, my initial reaction might have been similar. Who would want to deal with that kind of news? Also, he didn’t witness it himself. But, I don’t know, after a couple of minutes, after the shock wore off, I believe I would have done what any other human being with half a heart would have done and, at the very least, notified the proper authorities. Instead, a simple decision, to pick up the phone or not to, has ballooned into more victims, lives torn apart for those directly affected–the victims and their families–right down to the young athletes donning the Plain Vanilla uniforms of the Nittany Lions who had hopes of fulfilling their dreams as pro football players one day.

This is a valuable lesson to those students rioting in defense of their once-great coach and the face of their beloved football team. People in power care about one thing. Hint: It ain’t you.