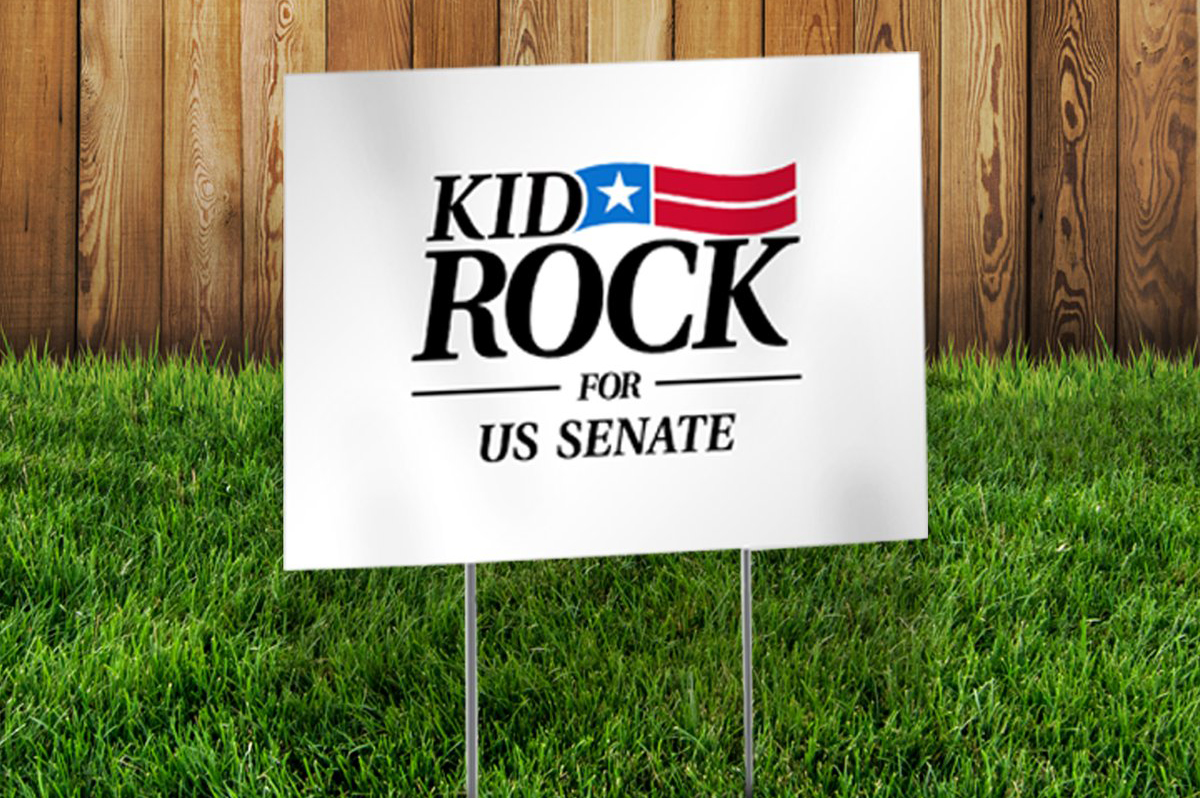 So I started off this morning reading a fancy bit of nerd news in the Los Angeles Times stating that Jodie Whittaker has been cast as the first-ever female Dr. Who. I should let it be known that Dr. Who is one segment of nerd fandom that I don’t consider myself a part of. I have bad memories of Dr. Who, because my older cousins were way into it, and when I would ask about it, they’d be like, “It’s not for babies, baby,” which really irked me. Nevertheless, I wish Jodie a bon voyage through time and hopefully the nerds who fear change and post bile-filled rants on message boards take it easy on you. Unfortunately, though, for me, I’ll always associate your accent to Doctor-dom with the day I found out Kid Rock (probably?) is running for U.S. Senate.

If you’re strong of stomach, take a gander at Kidrockforsenate.com. There, in the top left corner, you’ll see a fancy logo, proudly boasting “Kid Rock ‘18” in red, white and blue (of course). Beneath that is what I guess would be his campaign photo, and, honestly, it’s pretty amazing:

We see the future junior senator from Michigan seated in repose. He’s wearing sunglasses (indoors), jeans, T-shirt, tan jacket, brimmed hat … The chair he’s seated in has beveled wood armrests and plush blue upholstery emblazoned with gold stars. I’d imagine these stars are meant to echo those on our American flag, but for some reason they make the chair look like something a wizard would sit in while he was preparing his taxes. A window shade behind Sen. Rock has another logo on it, “Made in Detroit,” featuring the silhouette of a proud, blue-collar worker. A stuffed deer stands to Kid Rock’s left, also in repose, because he is quite dead. Or, perhaps it’s just a fake buck carcass that’s been added here to enhance Kid Rock’s ruggedness. It’s there, below the stuffed buck’s undercarriage that we see a familiar face. It’s a portrait of George Washington, flat-mouthed, looking on glumly and appearing to be wondering, “You know, maybe I had it all wrong. Perhaps monarchy really was the way to go.”

The website becomes curiouser, though, as you scroll down. Right beneath the striking image is a simple question in all caps: ARE YOU SCARED? I’m not really sure how to answer that. I mean, of spiders, yes; of Kid Rock, most definitely not. Though, I’m sure his bodyguards are pretty intimidating. There’s also a link to buy merchandise: Kid Rock for Senate hats, T-shirts, bumper stickers and yard signs, so you can let your neighbors know they should avoid you at all costs.

So is all of this legit? Well, though he has yet to file his paperwork with the Federal Election Commission as of this writing, Kid Rock assured his fans that this is on the up and up. In a news item posted on his proper website, Kidrock.com, he writes (copied here verbatim): “Once again the press is wrong. First of all, I’ve got 15 days from my announcement to file paperwork with the FEC! Second, I’m not signed to Warner Bros!!! – which simple fact-checking would have revealed. I have recently worked out a unique deal with BMG, Broken Bow, CAA and Live Nation to release music ON MY TERMS. Like politicians write books during their campaigns, I’m planning on putting out music during mine and IT ALL STARTS TONIGHT AT MIDNIGHT.”

Not surprisingly, we see some familiar language as he makes another attack against the press for false reporting, ending the article with the now infamous #fakenews hashtag. It should also be noted that though I didn’t bother checking whether or not he’s no longer signed to Warner Bros. (because who cares?), the website that sells his merchandise is Kidrock.warnerbrosrecords.com. So there’s that.

This news coincides with the release of two new songs and videos on his website, one of which is named “Po-Dunk,” which opens with a shot of the Bible, then features shots of an adorable pig stomping through a field, a pregnant woman smoking a cigarette, bikini-clad women shooting rifles and a kid with a shotgun shell in his mouth.

The song is what you’d expect: a boring mix of rock, country and hip-hop that doesn’t do either of those things particularly well but manages to be kind of catchy anyway (sue me, OK? I’m easily manipulated), but is this his de facto campaign statement? As the chorus goes, “Po … po-dunk. Don’t give a flying hillbilly fuck,” and then, “Holla if you in, shut up if you ain’t.” I guess this is just the kind of stuff we should expect going forward. Clearly, if he runs, he’s going to win in a landslide. I don’t even need a time-hopping phone booth to tell me that.