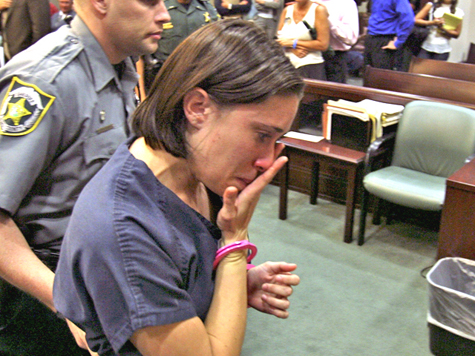 If I hadn’t been trolling Facebook at the time of the verdict, I never would have heard of Casey Anthony. Ignorance is not something I’m particularly proud of. Apparently it was big news–or at least people perceived it as big news. The 25-year-old Floridian was indicted on seven charges in the death of her 2-year-old daughter Caylee: first-degree murder, aggravated child abuse, aggravated manslaughter of a child and four counts of giving false information to a law enforcement officer in reference to a missing person. On July 5, 2011 a jury of her peers concluded, given the evidence that was presented to them (because that’s how our justice system works), that she was innocent of the first three charges (you know, the big ones) and guilty of the last four. She was sentenced to four years and up to $4,000 in fines, but since she was already in jail for the past three years (Anthony was indicted in October 2008), the judge credited her for time served and knocked a little bit off for good behavior. She’ll be free to go July 17, 2011. The Public was not stoked.

I won’t go into the tragic details of the case. I wasn’t following it, so I don’t know them. I’m more fascinated by the reaction. You’re probably way more familiar with them than I am, anyway, considering the Casey Anthony case was a pretty hot ticket. In Orlando, Fla., the Orange County Courthouse was the place to be this past Memorial Day weekend. People arrived at 5:30 a.m. in the hopes that they’d land one of the coveted 50 seats to see the public trial firsthand. Outside of Florida, Anthony was the toast of the talk show circuit as misery profiteers couldn’t talk about it enough. According to a June 20 article in the New York Post, on-air personalities such as Nancy Grace and Dr. Drew Pinsky left their competitors in the dust by dedicating their shows to the trial. Grace saw her ratings spike a mammoth 150 percent! While a Dateline special two-hour recap of the trial (for those of us who missed out) was the most watched program of the night it aired.

Murder-shmurder… For the networks it’s a shame a trial like this only comes once a century. Why, we haven’t seen anything like this since… you know who. I have to admit, I was all over that one. I used to rush home from high school just to see what Cochran and the boys were up to. I understand why people are so into trial drama. There’s a reason that Law & Order has been on for a billion seasons and, thanks to syndication, can be watched pretty much 24 hours per day if you navigate basic cable correctly. It’s riveting, and when it’s real life, it’s even more so. Death, betrayal, shocking revelations, comic relief (if you have the right team of lawyers)–they’re all there. Unfortunately in the real world, there are no Sam McCoys. Sometimes the outcome isn’t wrapped up with a tidy bow (in roughly 60 minutes with commercials).

Maybe that’s why everyone is so upset. There’s a beautiful 2-year-old girl dead and no one to take the blame for it. Her mother, clearly the culprit, will walk. But, the public needs to point its finger at something, so the jury might get the brunt of it. But how about the justice system? First O.J., now this? The parallels between the two trials became meme fodder as soon as the verdict hit. I see the correlation: they’re both guilty but proven innocent, right? I thought it was supposed to be the other way around.

Regardless of the outcome of this case, the justice system is just fine. It’s not infallible, but it’s the best system out there. Maybe after another era or two of social evolution, we’ll come up with something better. Maybe Apple will develop the infallible iJury. Until then, be thankful for what we got. Look at it this way, if we didn’t have the presumption of innocence, and it was on the defense to prove their client was not guilty, as opposed to the other way around, there’d be a whole lot of innocent people in prison. That would be a real crime.

But if you’re looking for a replacement, might I suggest Trial by Ordeal? This medieval form of justice was a real hoot, and most likely extremely effective. The accused would have to perform some dangerous task, believed to be under the supervision of God. “Passing” the test and proving your innocence might result in death, but that’s a small price to pay if you think about it. We could require those on trial to fetch a stone out of boiling water and check to see if they’re wounded, or how fast it heals; or, toss them in water to see if they float. The ones who do are guilty, and though the innocent may be drowned, at least they’ll have a finer reward in the hereafter. To modernize this wonderful tradition, we could hand the accused a revolver loaded with a single bullet and give the chamber a spin. God wouldn’t let an innocent man blow his brains out, but however it shakes out, think of Dr. Drew’s ratings boost.