Cash of the Titans 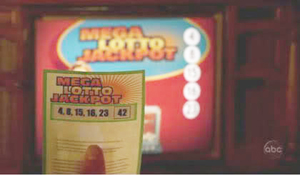 April 21 was Administrative Professionals Day. If you’re a boss with a hardworking assistant, I hope you did the right thing and took good care of the person who takes good care of you all year long. My day job–when I’m not doing all this written-word business–is as an administrative assistant (I prefer to say secretary, because I think it sounds more poetic), and I was happy to show up to the office to find a balloon and card waiting for me on my desk. Inside the card was a bundle of lotto scratchers, which yielded me a total combined winnings of $16. It was enough for me to put gas in my car, which was hovering dangerously close to the E line. I’m a simple guy, so a free just-about-half-tank of gas was a pleasant windfall.

Chris Shaw, by all accounts, is also a simple man. He works at a convenience store in Marshall, Mo. He purchased a $5 lotto ticket from Break Time, the store that employed him–since he wasn’t an administrative professional, his boss didn’t have a reason to buy one for him. He won enough for a full tank of gas–premium, even, for the rest of his life. Shaw took home $258 million in the Missouri Powerball drawing, which if he takes the lump sum and pays all the taxes ($6 million to the state of Missouri), will still leave him with a megaton of money. Shaw’s winnings rank as the tenth largest Powerball haul of all time.

At the time of his epic win, Shaw had less than $30 in his bank account and a pile of unpaid utility bills. He also has three kids by two different women. I’m not pointing this out to paint a poor picture of the man–I don’t know him–but I just wanted to make it clear that Shaw had expenses. I also wanted to say that I can relate–except to the part about the kids. Wrap it up next time.

I can’t even fathom what $258 million could do for me. It might as well be a billion-trillion dollars. The number is a fantasy, like a Pegasus imbued with the innate ability to eliminate my debt with one fell swoop before whisking me to the French Riviera, where I would drown myself in mojitos and try to convince rich European women that I’m a poet (I’ve been giving this some thought). God, seriously? What the fuck even is $258 million? That’s the kind of number newscasters throw around when they’re talking about the cost of government programs, isn’t it? Someone can win that much in the lotto? Wait, isn’t the lotto a government program? If they can dole that kind of money out in some whimsical contest, can they buy me a Pegasus? And why am I still trying to beat this mythological beast analogy into the ground?

What I’m trying to get at here is mere mortals like myself would probably have a hard time comprehending what having that much money would entail, especially if you’ve only got $30 in your bank account, or you’re cashing in lotto scratchers that your boss bought you in observance of some bullshit holiday so you can put gas in your car. Once again, Shaw and I are on the same wavelength. When interviewed by the Associated Press, the newly crowned multi-millionaire said, “For us it’s just going to be a huge relief to know I’m going to be able to pay my electric bill, my gas bill.”

That does sound nice. Getting out from under my mountain of credit card and educational loan debt, I’d finally be able to breathe easy, and my meager earnings would be enough to sustain me. But what about the rest of the $258 million? My debt may seem mountainous from my vantage point in the gutter, but if I were riding high on a multi-million dollar wave, it wouldn’t even be a speed bump. Can you put that much money in a bank? Would you even want to? I don’t even want to think about bonds, stocks and mutual funds (I had to look up what the latter meant), because all that math gives me a headache. You know what, you can keep the money. I’ll just take the winged horse.