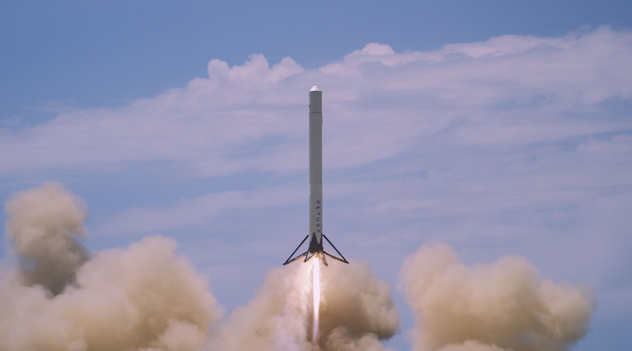 If there’s anything that I’m really jazzed about this coming year, it’s the possibility that I may be able to embark on space travel.

Anyone who’s ever read this column may know that I have a massive boner for space. Even though it’s comprised of almost absolutely nothing and the closest thing to us in the cosmos is some boring, silvery dust-rock thing, it’s still space, you know? It’s so vast, there’s just gotta be a Wookie out there somewhere.

So it was with great joy that we (as a species) finally did something worthwhile and successfully launched a rocket that completed a vertical landing back on Mother Earth, thus becoming the first reusable rocket in human history. On Dec. 21, 2015 SpaceX, headed by CEO Elon Musk, fired off the Falcon 9 from Cape Canaveral, Florida, and, after a 10-minute foray into space, brought it safely back. Falcon 9 was carrying 11 communication satellites with it, which I’m assuming are pretty heavy—at least heavier than I am.

Just 10 days later, Musk announced that on Instagram that “no damage was found” on the Falcon 9, and it was “ready to fire again.” However, as of now, there is no timetable for a second launch. The owners of the satellites, though they’ve already stated that they’re cool with it, still have to confirm that they will allow their payload to ride on a rocket that has already been used.

This is understandable. I have no idea how expensive a satellite is, but if my DirecTV bill is any indication, it must be pretty fucking expensive. This is why I’ve decided to step forward, for the good of all humanity.

Elon, bro, if you’re reading this, I’d like to formally volunteer my services to be your test subject for Falcon 9’s second test. I’m the perfect man for the job. Firstly, I really don’t serve that much of a purpose here on Earth. All I really do is dick around on Netflix most of the time. In fact, just today, I didn’t even roll out of bed until 15 past noon … Though, like, if you needed me to wake up early for the launch or whatever, I PROMISE I’d do my best to make it there (as long as it’s not too early).

Sure, I have a job and stuff, but it’s not like I’m Christa McAuliffe or whatever. I’m not a molder of young minds. Pretty much anyone could do what I do, so I’m easily replaceable. And as far as this column goes, if anything were to happen to me, I’m sure Melissa could just reprint old columns, and I doubt anyone would be any the wiser, especially since I mostly just write about space.

Now if you’re wondering, Elon, how you would make up the difference in the weight of payload between me and 11 satellites, I have the perfect solution: load up the Falcon 9 with beer kegs. This will serve a lot of purposes. Though I’m the perfect candidate to be your next test subject, I have one slight drawback: I can’t fly sober. It’s true. I think it’s bad luck or something. The first thing I do at any airport (after checking in of course) is head straight to the nearest bar. There’s nothing better, as far as I’m concerned, than sucking back an over-priced Maker’s Mark on the rocks at 6 a.m. in an airport bar. I’m sure I’m not alone, too. I’d bet a lot of your future customers are going to want to have a few libations when they’re riding in one of your commercial space rockets. It might be a good idea to find out how kegs of beer will hold up in low orbit. How will the lack of gravity affect the orange notes in a really hoppy IPA? Also, since I’ve found from my own experiences at Tahoe, that just a couple drinks at high altitudes get me white-girl wasted in no time. If that holds true, how wasted can we get in space? I think it’s something worth studying.

If these reasons aren’t enough to sway you, Elon, allow me to talk to you, dude to bro. Let me tell you the story of a simple man who came from humble beginnings. He had a stay-at-home mom and a blue collar dad. He had a few dogs in his life, and one of them was killed by a car in front of his house. He got pretty good grades in high school that translated to pretty decent grades in college (when he showed up to class and stuff) and he went on to do a little writing here and there, but all-in-all, didn’t really amount to much. Despite all that, and despite his constant self-deprecation, the people still like having him around, for the most part, and many of them would say he’s a swell guy, and he’d say that those people are pretty swell also. But he has a dream to one day go to space, and there’s no way in hell he could ever afford it. So what I’m trying to say here is PLEASE SEND ME TO SPACE EVEN THOUGH I CAN’T PAY FOR IT.