Do It Right Next Time 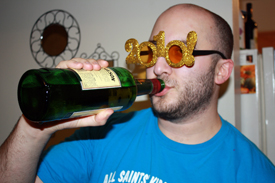 Another holiday season has passed. This is always a difficult time of year for me. It’s back to work, back to reality and 12 more months before it once again becomes socially acceptable to say fuck off to all responsibility and eat and booze as much as your heart desires. I usually do that anyway, but during the holidays, such practices have no adverse physical or psychological effects. It’s true.

You’d think limitless indulgence would make most people happy. But I’m always shocked to hear people react negatively toward the holidays. They say it’s too much of a hassle. It’s too much work. It’s so stressful. Give it a rest. If you’re working too hard during the holiday season, trust me, you’re the only one. Go to a party, drink some eggnog and lighten the fuck up. Do you know they have three months’ worth of vacation time in Germany? I’m not sure if that’s true or not, but that’s what I’ve heard—and they’re still way more productive than you are.

I can understand why Christmas in particular causes so much stress. There’s the gifts, the crowded malls and the traffic. Department stores look like they’ve been looted in anticipation of an impending nuclear apocalypse, and shoppers hungry for bargains would stab you in the throat if it meant another 5 percent off a pair of Isotoner gloves. So yeah, I get it. But look at it this way: this holiday season, I was stuck in a mall’s parking lot trying to buy gifts. The drive over was like a slalom course of morons and fuckwits. It was like everyone had forgotten how to operate a car—specifically a turning signal. If that weren’t enough, the parking lot was packed full of people who had seemed to miss a vital turn on the evolutionary road. One idiot parked himself in the middle of the lane, waiting for a spot, and making it impossible for the growing line of cars to maneuver around him.

I sat behind him with my knuckles white on the wheel. I seethed and spat things you should never say to another human being, especially if you have some notion of karma or even common decency. Eventually, he realized what an asshat he was being and pulled away, before the spot he coveted so much was even vacated. I eventually parked in an empty part of the lot, equidistant between the mall and Siberia.

When I simmered down, I realized I had no reason to be so upset. Nor did the countless other people I’d heard honk or shout hateful things at those who couldn’t get their dicks out of their own asses long enough to just drive like normal people (ahem). It’s not like we were battling for a better spot on the breadline, or rushing for the last ladle of soup. We were buying the people we love things they don’t need, because we had the means to do so. Like, if you can afford to buy gifts for people, then you’re probably doing OK. After the holidays were over, my coworker’s father entered the office and sat at the desk next to me. I asked him how is Christmas was, and he said, “Always good. It’s Christmas. Kind of hard to screw it up.” That’s paternal wisdom, yo. Stew on it for a while.

Even more outlandish than people working themselves up into a tizzy about Christmas are those who can’t get their shit together enough to enjoy New Year’s Eve. I really love it when people call it amateur night, as if being a professional drunk ass makes you better than those who just like to party balls one night a year and then spend the next day remembering why they don’t party balls every other night.

I’m a professional drunk ass. I love New Year’s Eve. I’ve never had a bad time. I also don’t put any undue pressure on myself to have a great time, because that’s the most ridiculous thing I can imagine anyone doing. You’re not going to win some good time award, you know. Simon Cowell isn’t going to call you a “twat” on television if you’re not having a lot of fun. Basically, all you have to do is show up somewhere there’s some people you like being around, add a lot of alcohol, loudly countdown a few seconds of arbitrary time and get to hugging and smooching or whatever. Sure, perhaps you should do this every day of the year, letting those you love know how important they are to you, but then they might think you’re creepy. I would, anyway.

If you didn’t enjoy yourself this holiday season, there’s probably no one else to blame but yourself. But it’s a new year, and though you probably think it’s clichÃƒÂ© to say, you’ve got a chance to start fresh, which means you’ve got roughly 350 days to pull that stick out of your ass. Good luck with that.