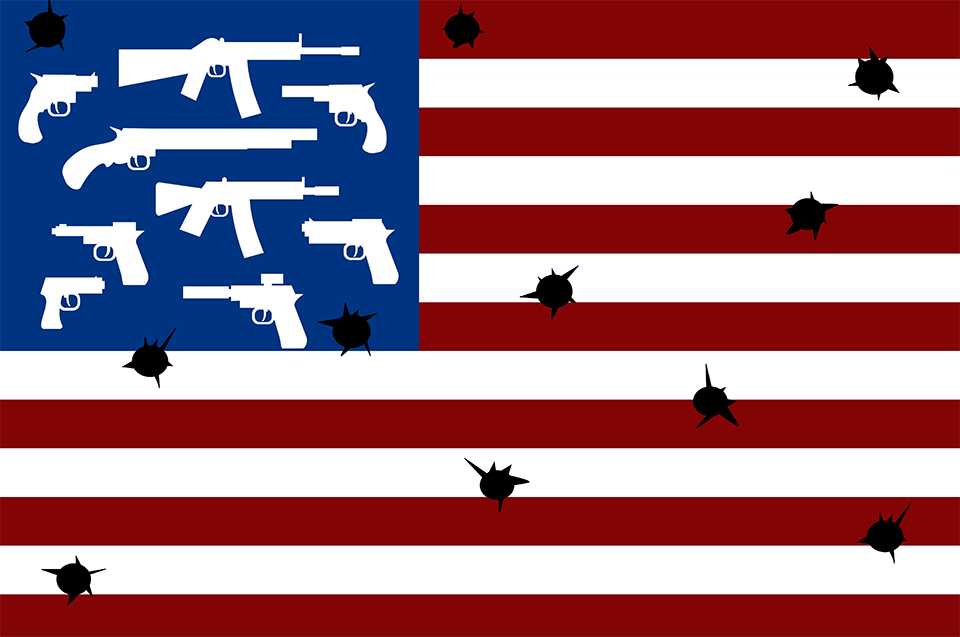 We have a real problem with guns in this country, and it will not be fixed with thoughts and prayers alone. Nearly 600 people were injured and 59 killed in Las Vegas Sunday, Oct. 1, making it the largest mass shooting in America yet. One old white man with a 23-gun arsenal carefully selected his perch high up in a hotel across the street from a country music festival and murdered people in cold blood. So far, we don’t know why he did it, and chances are we never truly will.

We won’t find out the motive of this crime because the man who killed and hurt all those people also shot and killed himself. As we have seen before, this is usually how this goes; someone shows up with a lot of guns at a place with a lot of people, shoots as many people as they can and then shoots themselves before anyone can find out why they would do something this cruel and senseless. Then we cry, hug our loved ones, write our congressmen and two weeks later we move on until the next tragedy strikes.

We’ve been doing it like this since the Columbine massacre of 1999, but this time it must be different. This cannot be who we are. We have all fought for too much to let or world fall apart like this. We cannot sit silently by and let all these lives be lost for nothing. According to the Guardian, more than 1,700 people have been killed and over 6,500 people have been injured in mass shootings in the United States in just the last five years. The people killed were men, women and children, and they came from all ethnicities and backgrounds. Any one of us could be a victim, and that should scare you.

Fear may be all we have left to make change. We’ve tried to reason our way through these events with stats and common sense regulations, but reason has not prevailed. Maybe fear will. Maybe we will all have to be too afraid to leave our homes before something actually happens. Maybe once we stop going to the mall, concerts, movies, work and school, the powers that be will start to listen. It seems that a total shutdown could be the only thing that makes Congress act.

I say that because money is the only other way to get Congress’s attention, and the NRA already has more of that than you. According to the Pew Research Center, most Americans agree we need to prevent the mentally unstable and people on the no-fly list from purchasing guns, there should be background checks for sales at gun shows, we shouldn’t have assault weapons or high capacity magazines and we should be tracking gun sales in a federal registry. Unfortunately, the NRA and its over-stuffed wallet have a different viewpoint.

The NRA is the real villain here. Their CEO, Wayne LaPierre, may not have personally pulled all those triggers that lead to these deaths, but the blood of the dead and wounded is on his hands all the same. The NRA’s lobbying efforts have crippled the gun debate in this country and left us with the broken system we have today. The NRA has repeatedly fought against any regulations or laws that would limit gun ownership or the manufacture and sale of guns and gun-related accessories. They’ve also thrown their weight behind any measures designed to loosen restrictions on gun ownership. In fact, Congress was working on a new NRA-backed bill to legalize gun silencers when the Las Vegas tragedy happened.

The idea that we would even have a bill in consideration to legalize silencers is crazy. What would be the purpose? You don’t need them for self-defense since sneaking up on someone to shoot them before being attacked probably wouldn’t count as self-defense. We don’t need them to make hunting easier because the playing field is already pretty uneven. Silencers are meant to hide the noise of a gun to make the killing more covert. That is the exact opposite of what we should want. If the shooter in Vegas had had a silencer, he may have been able to kill even more people before anyone figured out where he was shooting from.

Thousands of dead men, women and children can already attest to how easy it is to be killed by a gun in this country. The remainder of the living do not need Congress to make it easier. We don’t need the NRA to “defend” our rights, because they aren’t really trying to do that anyway. The NRA wants to scare us into believing that we all need to be armed if we want to live to sell more guns and collect more dues. How much longer are we going to fall for it? How many more people must die before we say enough is enough? I refuse to live in a world where this level of killing is normal. This time, let’s do something about it.