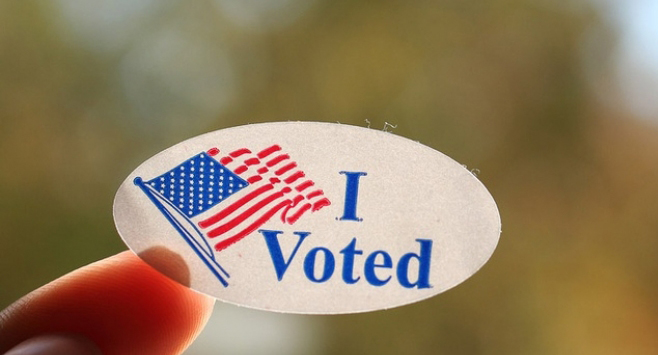 Good News: If you had 2018 in your Apocalypse pool, it looks like you might be looking at a big cash windfall. Unfortunately, though, once society collapses, all that money will be rendered useless. If you act fast, maybe you’ll be able to use your winnings to nab bottles of water or cigarettes or whatever will be considered the new currency among the wastes that were once Western Civilization.

As I write this, we’re a couple days before the midterm elections, which have been billed, probably rightfully so, as the most important such elections of our lifetimes. It’s probably true. It feels like it’s true. The lead up over the past two weeks has been, at best, surreal, but all too often horrifying.

I saw a clip on the news of Oprah Winfrey knocking on doors in Georgia, trying to convince people to get out and vote. I mean, it’s Oprah. If she knocks on your door and tells you to do something, you pretty much have to, right? If Oprah showed up at my door and handed me a pair of tweezers and said, “I need you to stack all the grains of sand in the Mojave Desert into a neat pile,” I guess I’d have to clear out my calendar for the next couple decades. I’m not sure exactly what would happen if you declined a direct request from Oprah, but I’d rather not find out … So I guess it would follow that if Oprah is knocking on people’s doors to convince them to vote, voting is probably pretty important.

In addition to Oprah, Barack Obama and Joe Biden, the greatest U.S. President/Veep bromance in our country’s history, have been ping-ponging to various candidates’ campaign events. It’s been strange to see them around. It feels like forever ago that they were in office, but it’s only been two years. Like, not even a full two years. Isn’t that fucking mind-boggling? How is that even possible? The craziest thing about seeing them on the stump again is that I realized that whole weeks would go by when I wouldn’t even think about either one of them. I assumed that they were doing whatever it is high-ranking government officials do, but it never crossed my mind to check up on them, and I certainly wasn’t hearing their names every day. That was refreshing, to be only vaguely aware of the President’s presence. It would be nice if we could see those days again.

Another thing that’s been popping up on my Instagram feed is people posting pictures wearing “I Voted” stickers. At first I worried that I’d been so sucked down by the all-devouring vortex that is the 24/7 news cycle that I had somehow missed Election Day. I mean, Oprah didn’t knock on my door to remind me after all—even though I always had a fresh pot of coffee brewing just in case—but then I realized that all these friends, acquaintances and celebrities I live vicariously through were happily advertising that they were voting early. I’d always heard that such a thing existed, but I didn’t think anyone actually did that. That’s pretty sweet that it does, since our designated Election Day is on a freakin’ Tuesday as if to be as inconvenient as humanly possible. Like, can’t we just move it to Monday and make a three-day weekend out of it? We don’t have nearly enough of those. And then after we vote, we can go shopping, so that would be a win-win.

Of course, all the build-up also had its terrifying downside. Bombs were mailed targeting the aforementioned previous president and other vocal critics of the White House’s current resident; a racially motivated shooting left two dead in Kentucky, another attack at a yoga studio perpetrated by an avid misogynist killed two in Florida and 11 were killed when a white supremacist opened fire in a synagogue in Pittsburgh; and amid all this, xenophobic rhetoric reached a fever pitch as a migrant caravan meandered its way toward the U.S. border. Army troops got ready for deployment and birthright citizenship, long-sacrosanct, suddenly became open for debate.

I realize that by the time this hits shelves around the Sacramento area, it’ll be Nov. 7. Maybe you’ll end up reading this after you spent much of your Tuesday evening glued to the television watching election results come in. Maybe you’re happy with the outcome, or maybe you aren’t. No matter what happens (happened) on Nov. 6, I’m really not sure what comes next, or what will change, if anything, going forward. Hopefully by the next time I get around to writing one of these, the answer will be a little clearer.