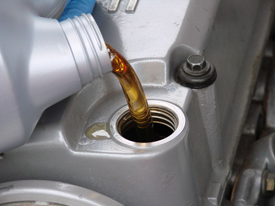 You can’t get an oil change on Sunday. Trust me, you can’t. If you can, then I find you suspect. You see, I think I may have uncovered a new secret society! It wasn’t something I was looking for; it sorta just revealed itself one day. What I found proved to be seriously disturbing and I knew it was my duty to bring it to you, the public at large.

When filing an exposÃƒÂ© of this level, it’s believed that one should verify all information to ensure that the final product is, in fact, the truth. However, I’ve selected a different course, and my report here today is wildly speculative and mostly fabricated. With that in mind, I say to the brothers and sisters of Let Us Be Elsewhere Sunday (L.U.B.E.S.), your secret is no longer safe!

It begins with a drip. L.U.B.E.S. and prospective members (known as Drips) gather after hours on Saturday to discuss business, christen new members, fraternize, drink and get freaky. Drips must be sponsored by existing members (who are also known as Lubites). The initiation period lasts six months or 1500 oil changes (whichever comes first), and is rigorous, to say the least. Drips are expected to learn both viscosity grade and brand of oil by taste. In addition, they must each take a shot of used motor oil to the eye.

After a successful taste test and reception of the ol’ black eye, Drips are given a personalized blue shirt and engraved tire pressure gauge. The next step is a baptism of sorts. It starts with just a few drips of oil, but it soon becomes a shower. Newly christened Lubites are left covered head to toe in the slick. It’s meant to remind them that, while they may live in a dirty world, at least they control its flow. These gatherings typically carry on into the wee hours of the morning. Eventually, everyone chooses a place to sleep and cars are lowered from the ceiling to protect the slumbering Lubites.

Don’t get it twisted… this ain’t your grandma’s knitting circle! These cats are serious; they know the amount of power they hold. You know why Hitler lost in WWII? Tanks can’t roll without that black gold, dunny. That’s where the Lubites come in; they maintain the machines that we depend on. In fact, their credo is, “Domination through lubrication.” That’s right; these grease monkeys can literally grind your gears. Sure”¦you could change your own oil; but let’s face it, your ass is way too lazy and oil is way too dirty. You know you don’t want to crawl under the whip with a pan. And what are you gonna do with the old oil? And yet, on one day a week we are left with no other choice.

Lubites flex their muscles every week by closing their shops on Sunday. They like to show us who has the power in this relationship. We are to be inconvenienced by them, not the other way around. Obviously, Lubites take their Sabbath seriously, but what, exactly, do they do on Sunday? Lubites typically rise around 10 a.m. to enjoy a cup of old black coffee and a few pastries from yesterday. The plotting begins over breakfast. Some will be sent out to drop tacks at major intersections; others trigger engine service light warnings in cars all over town. Drips are encouraged to go out and “sample” the local cuisine. These dipstick lickers have been known to drain entire semi-trucks in under a minute.

In addition to pissing me off, L.U.B.E.S. also presents a growing threat to national security. They seek to control every major facet of our lives through building dependency on their services. For many of us, Sunday is the day to get shit done. When you need them most, where are they? I’ll tell you where… out there screwing you and your ride! We cannot continue to sit idly by while engines seize and breaks squeak. Carpe diem people! Let’s get these bastards!