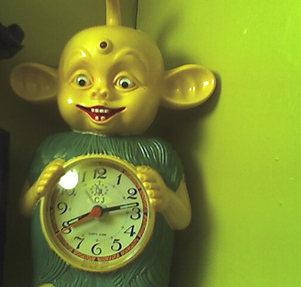 We literally live and die at the hands of a machine. Each day when you wake up, your first inclination is to check the time. You do the same almost every night when you set your alarm before bed. We used to keep it in our pockets, but now we wear it more prominently on our wrists or we check it constantly on our cell phones. We might as well admit it: We are slaves to time. It is our unrelenting master. It tells us what to do, and more importantly, when to do it. Of course, the best part of the situation is that it’s largely of our own invention.

Nature provided the night/day and seasonal cycles, but man needed more. Ancient people built structures to measure and mark points in time. They created calendars for us to follow. We used to rely on the Sun and Moon for time keeping, but at some point we decided that wasn’t cutting it. So we built elaborate, multi-gear, mechanical clocks. And, for what we could now call “a time,” all was well.

Mechanical clocks were the bee’s knees until people realized it sucks to have to wind things up all the time. Also, this whole “time” thing wasn’t really jiving with how we perceived things. How can parts of the day whiz by while others drag ass, if the clock seems to chug along steadily? Clearly these gears were possessed and could no longer be relied upon.

After the implementation of modern electricity, man harnessed the power of quartz to run his clocks. If you can’t trust the Sun, Moon or even your own hand-made gears, then surely, a rock will do. Fortunately, this isn’t just any rock; it just so happens to resonate at a very specific and measurable frequency. So, it’s really more like a magic rock! And people love magic”¦ until they don’t. Then they want science to get more involved.

So science stepped up its game, and now we have atomic clocks. Not to be confused with atomic bombs, atomic clocks can do no more harm than blowing up your day planner. These are the most accurate clocks we currently have, and they ain’t cheap. Naturally “the man” has access and he lords it over us, mostly through the television and radio scheduling. Yes, they are the ones that attempt to evade your DVR start and end time settings.

As time-keeping gets more accurate, our obsession grows stronger. Count the number of clocks in your house. I didn’t realize before, but I have a shit-ton of clocks! In fact, I have three clocks within view right now. I would be hard-pressed to think of a place where the time would not be discernable within a minute or so. So, you’d think I’d be a master of time, but I’m usually running late.

Tardiness is never well received. “Time is money,” they say. When I hear this phrase, all I can think is, “Great”¦here is another way I’m not getting paid.” To people who say that, I say this: You sound like an asshole. Thanks for reminding me of the two things I don’t have much of. People who use this phrase are the same people who overdose on coke in their early to mid-40s. Where are your time and your money now, asshole?

That’s not even the worst of it. We’ve come up with all kinds of time-related phrases that we use to annoy each other. “Time flies when you are having fun,” for example. First of all, “flies” is the wrong verb and secondly, time isn’t changing at all, just your perception of it. The saying should be, “Your mind misperceives time when you’re having fun.” Besides, that’s way more catchy, isn’t it?

“Only time will tell.” No, time doesn’t tell you shit. It just does it and then waits for your reaction. It’s always one step ahead of you, just waiting to pounce. You turn your back for what feels like one second, and pow: you are 80 years old living in a retirement community in Arizona, wondering where the hell your life went. Perhaps it’s part of a larger plot or scheme that I should be trying to uncover. Unfortunately, I am out of time, so it’s going to have to wait.