I Don’t Think You’re Ready for This Jelly 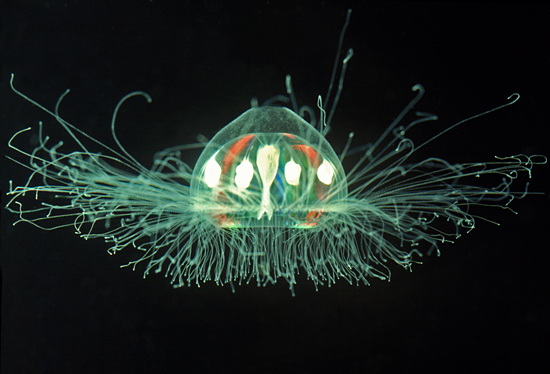 I’ve heard countless apocalypse scenarios, but I think this one is, by far, the worst: jellyfish. I know a lot of you out there probably think they’re beautiful. You’ve been to that exhibit at the Monterey Bay Aquarium and just marveled at these gooey little fuckers glowing in the water like neon lights. And sure, that’s nice between all that glass where they can’t get at anything, but know this: Jellyfish are complete assholes.

Jellyfish are some of the oldest forms of life on the planet. They’ve called Earth home for 550 million years. That’s insane right? These crazy-ass tentacle/mouth blobs outlived T. Rex. Like I said, insane. But anyone who knows anything about evolution knows that creatures don’t survive by being nice. Species don’t last through meteor bombardments, catastrophic climate changes and geomagnetic reversals by holding bake sales and donating to charities. They usually survive by fucking over as many other species as possible.

Now, jellies are taking over the oceans. There are a lot of possible reasons for this. According to Tim Flannery’s frightening article for the New York Times Review of Books, jellyfish don’t need a lot of oxygen to survive, they are fast breeders and will eat just about anything (and everything). If food is scarce, they simply stop growing until they find more food and start growing again. There is even one jellyfish that can reincarnate itself.

“When Turritopsis dohrnii ‘dies’ it begins to disintegrate, which is pretty much what you expect from a corpse,” Flannery writes in his review of Stung! On Jellyfish Blooms and the Future of the Oceans by Lisa-ann Gershwin. “But then something strange happens. A number of cells escape the rotting body. These cells somehow find each other, and reaggregate to form a polyp. All of this happens within five days of the jellyfish’s “death,” and weirdly, it’s the norm for the species.” 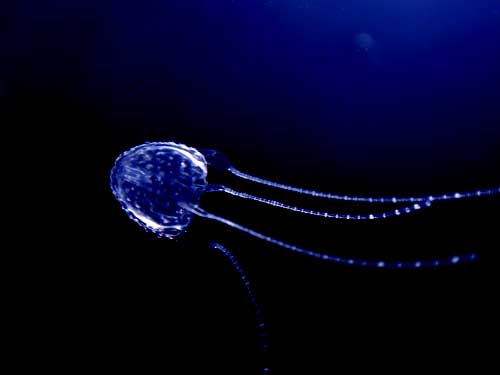 The Jesus of the Jellies. It’s fucking scary.

While other sea critters have been able to keep jellyfish populations in check, in recent years, their population has been booming. Climate change, increased globalization of the economy and ecological disasters such as oil spills are all possible culprits. Jellyfish, due to their 550 million years of evolution, can thrive in conditions that most other sea beasties can’t handle. With their competition on the wane, jellyfish have been able to take over.

They’re also spreading out. Two of the most venomous creatures in the world, the box jellyfish and Irukandji, which normally were found in northern Australia waters, have migrated off the coast of Florida. Since 1884, 76 people are known to have died from box jellyfish stings, and it’s believed that many attacks have gone undiagnosed. The sting of the Irukandji is so potent that a slight encounter with the creature’s tentacle—one that doesn’t even leave a mark—can cause something called Irukandji syndrome that doesn’t set in until a half-hour after the sting. Symptoms include nausea, severe kidney pain and spasms in the limbs. 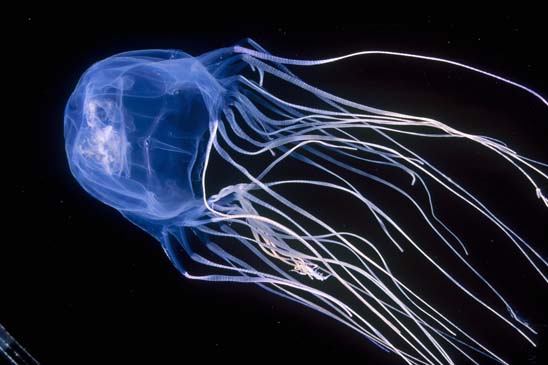 Box jellyfish are different than other jellies, because they’re active hunters and have complex eyes with irises and corneas. So they can see you, and they want to sting your exposed fleshy parts.

Plagues of jellies have been happening all over the world. They’ve decimated commercial fishing in the Black Sea, destroyed salmon farms and in 2006, even shut down an aircraft carrier, the U.S.S. Ronald Reagan. They’ve been a nuisance at Japanese power plants too, and you know how stable those things are.

The only real experience I have with jellyfish are seeing their spooge-y bodies dead on the beach, like the ocean rubbed one out and shot its load right there on the sand and didn’t even have the decency to use a Kleenex. I think I stepped on one once and the thing still stung me. It was itchy and irritated as hell, too. So, much like the creatures from Aliens, even when they’re dead these jellies can still be caustic.

I’m not sure what, if anything, can be done about the rise of jellyfish in the oceans. Maybe this is just where we’re headed. Maybe every aquarium all over the world will only have all those pretty little jelly exhibits that everyone seems to like to take pictures of, because they’ll be the only aquatic life left. Meanwhile, our oceans will be just one giant, gelatinous mass of goo…which I guess isn’t much different than what they are now anyway.