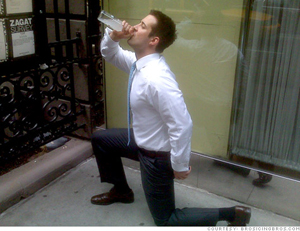 When Alanis Morissette warbled in her distinctly Canadian voice, “It’s like rain, on your wedding day…,” in the hit single “Ironic,” she probably didn’t realize the true impact of her words. You see, while a rainy wedding day–believed to be good luck by some–is something of a bother, even bordering on tragedy depending upon the location of the event and/or the emotional states of the parties involved, it’s not ironic. It’s coincidental. But why let fact get in the way of a good buzz word?

Irony is when a word or phrase is used to express something that is the exact opposite of the literal meaning. I learned that from countless hours of English classes, but I really only remember the definition because Troy, while brooding in a diner, uttered to Laney in Reality Bites. Sarcasm is the lowest form of irony. I use it all the time, because I’m an idiot. I love to say, “I love sitting in traffic behind a caravan of douchebags,” when clearly I don’t. Who would? (Answer: other douchebags.)

Nowadays, irony means whatever, really. The old, faded T-shirt you bought at the thrift store last week, the one with the logo of some youth softball team you never played for, is totally fucking ironic. That mustache you’re wearing, the one that makes you look like someone who likes to fuck 5-year-olds in the back of a white van, is super ironic because you’ve never fucked 5-year-old kids in the back of a van. Or, maybe you have but you just didn’t enjoy it. I get it. Really.

Like I said, irony means whatever, really. It’s more of a state of mind. I’m not too upset about another sign of the decline of the English language. Words’ meanings change over time thanks to social and cultural shifts. I learned that in school also, but I only really remember it because I religiously tune into HotForWords on YouTube.

Irony took another blow recently with the rise of “icing.” I hadn’t heard of icing until our publisher, Melissa Welliver, informed me about it. She said she’d heard about it on the news. I figured it had to do with getting high, and kids just didn’t want to call it “getting high,” because then they’d just sound like their stupid hippy parents. As it turns out, I was sort of wrong. Icing does involve alcohol, the tastiest of drugs, but it’s got nothing to do with kids. Instead, it’s become very popular among adult office workers who clearly don’t have to work for a living.

Icing, as do most things that aren’t at all good for you, started on college campuses but has spread outward, becoming popular in offices along the East and West coasts. The tradition, or so I’ve read, goes as follows: One dude tries to trick another dude into looking at a bottle of Smirnoff Ice. If he does, he must get down on one knee and chug the entire bottle. When I was a kid, we had a game in which we would hold our hand in a sort of upside-down “OK” gesture and try to get a friend to look at it. If he did, we would call out “sply” and punch him in the arm. Comparing sply to icing, I’m not sure which one is crueler.

The joke integral to the game of icing is that Smirnoff Ice is for girls, and no self-respecting dude or brosef would be caught dead drinking it. I would argue that the same goes for any female of legal drinking age also, but I digress (and also, I do not condone under-age drinking…parents!). Regardless, the game will certainly boost the sales of the flavored beer-ish beverage for as long as dudes think it’s funny. CNNMoney.com even published an article about icing. “The game could also create a new association for the product–humor,” Mina Kimes wrote in her article. “Consumers sometimes support products and ideas ironically, propelling fads like ‘Rickrolling,’ which introduced a younger generation to ‘80s singer Rick Astley. KFC’s DoubleDown sandwich, better known for its absurdity than its flavor, has been a hit for KFC, which recently extended its tenure through the summer.”

Oh, the irony. The real irony is that forcing someone to drink something or listen to a song or eat a mutant sandwich that they may or may not like isn’t ironic at all. It’s just a cheap way of having a laugh at someone else’s expense. But don’t listen to me. I’m just upset that I’ve never come up with something like this myself. How’s that for irony?