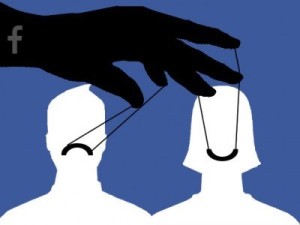 Back in 2012, which seems like the distant past now, Facebook conducted a week-long study on more than 689,000 users without their knowledge. What they did was introduce more positive or negative posts to the feeds of those “involved” with the study and tracked whether or not it influenced those users to post more positive or negative items. What they found was a correlation: Those who were exposed to more sad stuff posted sad stuff, and vice versa (maybe this explains why that one sad panda friend of yours is so morose all the damn time, and you want to be all, dude, the barista at Starbucks gave you one too many Splendas…it’s just a coffee, dude, it’s not the end of the fucking world!).

The study was authored by three scientists (Adam Kramer, Jamie Guillory and Jeffrey Hancock) who were looking for evidence of “massive-scale emotional contagion through social networks,” according to the title of the study posted on PNAS.org.

“This work also suggests that, in contrast to prevailing assumptions, in-person interaction and nonverbal cues are not strictly necessary for emotional contagion, and that the observation of others’ positive experiences constitutes a positive experience for people,” the authors wrote in the abstract for the article.

This seems all well and good. Nothing was really gathered or stolen from these nearly 700,000 Facebook users without their knowledge. The researchers were merely manipulating them to see if they were on to something with their hypothesis. What’s the big deal?

Well, you should know by now that everything nowadays is a big deal. This past weekend, news spread that this study had taken place and people were pissed.

“What is the point of this research? Why is it being conducted? Is it purely an academic exercise, or could it be used by some unscrupulous party to mess with people’s feeds and moods on a regular basis?” Mark Sullivan wrote on June 28, 2014, for Venturebeat.com, which included an image of Alex (played by Malcolm McDowell) from Stanley Kubrick’s A Clockwork Orange enduring The Ludovico Technique to accompany the article.

In their own article on the story, Financialtimes.com included a tweet from Brightwork CoResearch founder Jacob Shiach, which read “Facebook manipulated the emotions of its users. Unethical? Yes. 1984? Yes.” Referencing, of course, the classic George Orwell novel 1984.

I suppose this whole thing does have a hint of an Orwellian nightmare to it. Big Brother watching over you and all that…manipulating what you do and say without your knowledge. Yeah, Ok. I guess it does. But Facebook isn’t an oppressive government that you can’t avoid or are powerless to act against. It’s a fucking website where you post pictures of your cat (or in many cases other people’s cats) doing zany-ass shit. It’s where your mom leaves you indecipherable messages because she’s really bad at typing on her new iPad. It’s the place where a shitty concert photo can get more than 100 likes from your friends because you can almost kinda sorta see Damon Albarn on stage if you squint real hard.

And while those involved in the study were unaware that they were a part of a psychological experiment, they weren’t involved without their permission. Kramer, Guillory and Hancock’s paper points out that all Facebook users consented to the possibility of being used in studies when they agreed to the site’s Data Usage Policy, according to the Venturebeat.com article.

If it really bothers you that your emotions were being toyed with you could always just delete your profile, you know. It’s not that difficult (actually, it is pretty difficult because Facebook asks you at least a million times if you’re sure you want to delete it, but you know what I mean). You shouldn’t agree to things you don’t agree with no matter how much peer pressure is involved. That’s what being a grown up is about, dude…or at least that’s what I’ve heard.

I’m not denying that Facebook doesn’t have influence. It has a population more or less equivalent to that of China, and we know how powerful they are. But at the end of the day, Facebook is just a product that you choose to partake in. Go on. Leave if you don’t like it. It’d be social suicide, but you know, your choice.

Honestly, though, I would like to know if I was one of the people involved. And if not, why not? People like my posts, I have 500-something friends, I’m easily manipulated. I matter, damn it! That’s why I post shit online!