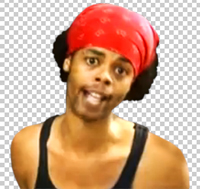 The other day, Submerge contributing editor/my personal life coach (it’s not a paying gig) Mandy Johnston had to stomach through yet another one of my woeful diatribes. You know, I have to tell you, being white and somewhat privileged in America just hasn’t been as easy as I’d heard it was going to be. I was bemoaning the death of the American Dream or some such ennui-laden bullshit. But it would appear that the American Dream is alive and well–just look at Antoine Dodson.

You should know who he is by now. Last month, his sister Kelly was the victim of sexual assault, perpetrated by “some idiot from out here in the projects,” in Hunstville, Ala. That wasn’t the big news, though. Sadly, rape has become all too commonplace in cities all across the United States. No, the story here was the news clip that reported the incident. In the segment (originally aired on WAFF 48, Huntsville’s NBC affiliate), reporter Elizabeth Gentle questioned the Dodson family about the trying incident the night before. A man–still at large–used a garbage can to climb into Kelly’s window and attempted to rape her. She fended him off, and the altercation caused enough of a ruckus to alert her brother Antoine, 24. The two were able to repel the attacker’s advances, and Kelly and Antoine emerged from the fracas more or less unscathed.

Still, the incident left everyone involved understandably frazzled. “Emotions were running high,” as the WAFF news anchorman put it. Interviewed at the scene, Antoine took the mic, went on a fantastic tirade and uttered, amongst other things, “Hide your kids, hide your wife, hide your husband, because they’re raping everyone out here.” I’ve seen the video about a billion times, especially if you include the brilliant Auto-Tuned remix version crafted by the Gregory Brothers. I laugh every time.

I realize rape is serious. It’s not funny. But it’s so rare you see something real on television. Here was a man who was angry, fed up and extremely charismatic. He didn’t care that the camera was on him. He didn’t have some safe, saccharine, calculated response to the incident. He just chased off a man who broke into his house and tried to rape his sister, and he was righteously pissed. His rattling, strangely poetic response skittered in a million directions and was delivered with such flair, you’d think it had to be scripted. He just had to be prepped by some producer, but he wasn’t. This wasn’t an aside from a famewhore Survivor contestant, or some contrived Real World confessional. This was the real world. This might have been your back yard.

But then there’s the dark side of this. Here we are having a hearty laugh at some underprivileged family’s misfortune. I can see how someone can get satisfaction from snickering at the Real Housewives of Wherever. They had everything handed to them, and they’re still wastes of life. The Dodson family is in the projects of Alabama, worried that another intruder might climb through their window–and maybe the next time they won’t be so lucky.

I’m happy it’s Antoine that’s having the last laugh. Once he became an instant celebrity, he did the smart thing. He hired a lawyer, started selling merchandise and set up a website with a PayPal account so people could donate to his family. The Gregory Brothers’ remix of the Dodson news interview made it on to iTunes, and the musicians split the proceeds 50-50 with the family. In the end, Antoine put together enough money to move his family out of the projects, according to an interview with ABC News.

So maybe I don’t have to feel so bad about breaking into cackles every time I see Antoine’s fiery rant.

Or maybe I should? In his Aug. 5 article for News One, writer Claudio E. Cabrera posed the question, “Is Antoine Dodson embarrassing to black people?” His conclusion read as follows: “Too many Blacks care about what other ethnic groups/races think of them. That has to stop. We have to realize that for every Black Antoine Dodson, there are plenty of Whites and Latinos who act just like him.”

The closest things I guess I can equate his sentiments to from my own experience are the “characters” on MTV’s Jersey Shore. As an Italian American from Staten Island, N.Y. I think they’re giving all of us a bad name. They’re just perpetuating every stereotype that we’re just a bunch of image-obsessed, gum-smacking, fake-tanning, brainless douchebags (I do, however, admit that when I chew gum, I sound akin to a cow chewing its cud). Perhaps Antoine Dodson maintains negative stereotypes of African Americans. But at least Antoine can say that he helped stop the rape of his sister and, in so doing, earned enough money to help his family’s situation. For lack of a better word, I’d say he’s a hero. The kids from the Jersey Shore haven’t done shit for humanity, except perhaps drink and tan so much that they’ve rendered themselves sterile. One can hope.