Laugh All You Want, But They’re Your Friends 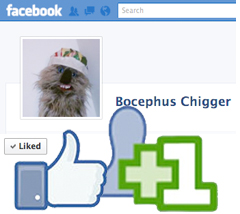 Once upon a time, a person would communicate with other people by stepping into their physical presence and speaking with them or by writing them a letter. This process was greatly simplified with the invention of the telephone, but the device didn’t cure the occasional need for physical contact. With all the effort involved in communicating, people tended to be a little more selective in the company they kept. That all changed with the dawn of the information age. Friendster, MySpace and ultimately Facebook help us choose our friends now.

When you look at all your friends, you will see behavioral patterns emerge. For example, we all have a Farmer Ted in our lives. He’s the guy who plays way too many Zynga games for anyone’s own good. You made the mistake of downloading whatever lame ass Facebook app Teddy sent and now your news feed looks like his 4H trophy room.

Farmer Ted is a joy compared to our next buddy, Grumpy Gus. Gus has some complaints and he plans to air them out on Facebook day after day. On a great day, his status might read, “Meh.” He hates his job, his house, his car, his girlfriend, his dog, his life, etc., etc., etc., and apparently, you need to know about it.

Of course, you also have Grumpy Gus’ polar opposite, Cheery McHappy. Everything is always roses, puppy dogs and chocolate cake for her. She likes to remind you that God does everything for a reason right after you suffer a particularly painful loss. This eternal optimist is quite possibly the most annoying person you know.

Cheery is a lunatic, and one day she will crack, unless she finds something to focus her energy on. To save herself, she may want to take a lesson from our next cherished pal, Workout Jane. Janey’s running a marathon every other week. Her status updates include daily caloric intake and a BMI count. Every day she seems to reach a new personal best while you sit on the couch in your sweat pants checking out Facebook.

When you are feeling lazy, your boy, Reggie Reddit, has everything you need. He reads the news and breaks you off with the highlight reel. This cat knows things…news, religion, music, popular uprisings, macroeconomics, long division, you name it. His Spotify playlist is unrecognizable, but somehow you know it’s all dope.

Reggie is full of great info, but sometimes you just need a distraction. When life is dull, our next compadre, Jamie Jet, can help. Jamie never stops traveling. One day she is in Anchorage, Alaska, eating salmon steaks and shooting grizzly bears, and the next day she is riding on the back of an elephant in the Congo. Who knows how she pays for all of this, but who cares? Jamie brings you the things that you don’t have the time/money/energy to see yourself.

If the pictures in your feed aren’t Jamie’s vacation highlights, they probably belong to our next homey, Sherry Baby. Sherry can’t stops taking pictures of her kids. Sherry is very determined to show you what perfect little angels her babies are. You, of course, are obligated to occasionally comment favorably on her precious, precious cherubs. She never seems to run out of pictures and/or kids.

Somebody has got to be paying for all of these kids. We all have that friend that is always on his grind trying to make ends meet. I call him Hustle Man. Hustle Man featuring DJ Wacky-Dee and the J Cat All-Stars have been sending you event invites every week for the past two years. Maybe your Hustle Man has a house to sell you. Hustle Man definitely has a business investment opportunity for you, friend.

Hustle Man wants you to read Submerge and become our friends/fans on Facebook. I’ve even decided to make the leap from 1992 to the present and get into this social inter-webbing that you crazy kids do these days. Become a fan and make bets on how long it takes Zuckerberg and Co. to kick me off. Who knows, maybe one day we will even be hearted, super BFFs!

Word by Bocephus Chigger
bocephus@submergemag.com
Lets be friends! Actually just “like” me: http://www.facebook.com/BocephusChigger