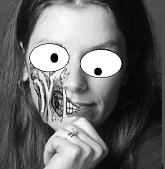 Carolyn Hax is an advice columnist for the Washington Post. According to Wikipedia, she received a Bachelors of Arts from Harvard, which apparently qualifies her to be an advice columnist. Well I graduated with a Bachelor of Arts from UC Davis, the Harvard of Yolo County, making me similarly qualified to dole out free advice. Sure, her readers actually ask her for help and I am just stealing those pleas to serve my own comedic purposes, but who are you to judge? If you want my advice, I’d say keep your mouth shut and read on.

Dear Bocephus,
There’s a woman who lives in my apartment building who is not just morbidly obese (because who isn’t nowadays), but so obese that one almost can’t help but at least glance at her when she’s nearby. The other day, she caught my eye when I looked in her direction—I honestly didn’t mean to stare, I just saw her peripherally and looked over—and the next morning I had a note from her in my mailbox accusing me of cruelty and being insensitive toward her incredible struggle as an overweight person. Were I to write a letter back (I’m undecided, but considering it), what do you think it should say?

For the record, I’m chubby, too.

Dear Chubster,
First off, I applaud you for embracing your own morbid obesity. This lady must have been fat as all hell if she got the attention of another extremely large human being. When she caught your eye, did she immediately swallow it or just trap you with her glaze gaze? From your description of the scene, it sounds as if it would not have been possible to avoid looking at, at least, part of this woman if you were anywhere near her vicinity. It was as if she were pulling you into her by using her sheer mass alone. What I’m getting at is I believe your neighbor may be a black hole or some visible manifestation of dark matter. I would avoid her lest matter and anti-matter collide and destroy the universe. If you have to write a letter back, I’d suggest telling her that you’ve alerted Stephen Hawking and Neil deGrasse Tyson to her presence.

Dear Bocephus,
My spouse “friended” an old flame on Facebook some months ago. When I said I felt uncomfortable with this, I was told that they are just friends and not to worry. We’ve actually had several emotional discussions about this since, but nothing has changed. Now when I see that the friend has “liked” or commented (which is often), I feel increasingly uneasy. Am I being unreasonable? How can I just let it go?
– Spouse

Dear Web Nazi,
When your husband told you he was just friends with this woman did he use air quotes when he said friends or mumble the words “with benefits” right after? Did he not want you to worry because he is the pull out king? Are any of the “likes” she posts on Facebook for pictures of his penis or the two of them having sex? If the answer to any of these questions is yes, then he is probably also friends with her on Snapchat and Kik too and they are getting busy. It could be that or they both have nothing better to do than like things on Facebook. 50/50.

Dear Bocephus,
My girlfriend has told me about her unfaithful past. It has me worried quite a bit. She told me she dated someone for three years, and in the last year she became unfaithful. It started with just hanging out with a guy she liked, but she didn’t engage in anything physical. However, she did meet someone at work and that went into physical territory—weekends away to hotels. Her then-boyfriend found out and she lied to him.
After that ended, a year and a half ago, she became very promiscuous. We met four months ago and have been dating ever since. She told me she would never cheat on me, and that her past was full of mistakes. She says she used sex to cope. Sometimes I worry. I’ve heard the saying, “Once a cheater, always a cheater,” and I’m trying my best not to become a jealous, possessive boyfriend. Any advice?
– R.

Dear Pirate,
Sorry I didn’t get back to you sooner. I was busy having sex with your girlfriend. You aren’t kidding, that girl is a real ho bag! Trying to lock her down in the middle of her year of sexscapades and hotel fuckery was probably not the best idea. By any chance does your girlfriend know a man named Spouse that is also married to a woman named Spouse? You may want to contact our previous advice seeker and exchange notes if she does. Oh and tell your girl to call me!