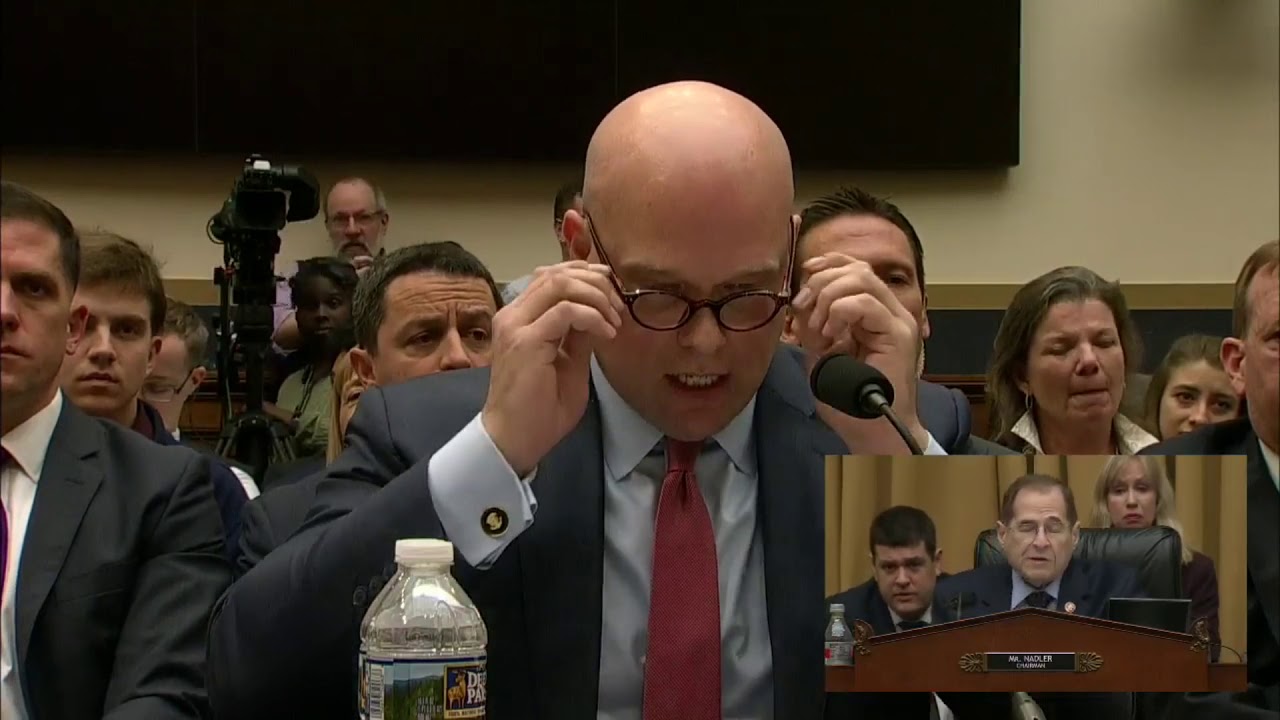 Did anyone else see Representative Jerry Nadler, D-NY and head of the House Judiciary Committee, spar against acting Attorney General, and owner of world’s largest head, Matt Whitaker this past week? If you haven’t, I suggest you do. It was like Thunderdome for grumpy white dudes.

There was one particularly testy passage when Nadler read Whitaker the riot act, basically for being a waste of space (stating the obvious) and followed it up to his admonishment by asking, “In your capacity as acting Attorney General, have you ever been asked to approve any request or action to be taken by the special council?”—referring, of course, to the Mueller probe. It seemed like an innocuous enough question. After all, Nadler didn’t ask if Whitaker had or hadn’t approved any such things, but if he’s been asked to, and he wasn’t even questioned as to whom may or may not have made such requests, just, like, basically, in the course of your job, have you ever had to perform the tasks presumably required of your job? But Whitaker seemed intent on making it perfectly clear that—surprise, surprise—he’s not doing anything, probably because if pressed as to what the United States’ Attorney General’s job entailed, he’d most likely be as clueless as the rest of us. I mean, if someone asked me what an Attorney General did, I’d just hedge my bets and answer, “Important stuff,” which I’m sure is vague enough to be factually correct.

For his part, though, it wasn’t enough for Whitaker to just play dumb or pivot or, I don’t know, just stop wasting everyone’s time and answer the question. As an aside, I wonder how much these hearings cost taxpayers per hour. It’s probably not cheap … just saying. He seemed to want to prove that though he’s the human equivalent to a lump on a log, there was, in fact, something going on in that ponderous noggin of his. So, he flashed an impressive feel for comic timing by pausing, briefly, before retorting:

“Mr. Chairman, I see that your five minutes is up.”

The response sent gasps and nervous chuckles through the crowd. Even Nadler had to crack a smile. I mean, to be honest, it was pretty funny. I couldn’t tell if Whitaker was just a master at deadpan comedic delivery, or if that’s just the only face he’s capable of making.

I suppose it shouldn’t be such a surprise that Whitaker knows how to make for good television. He was a talking head, after all, before he improbably landed a gig as the nation’s top law enforcer. In fact, it was said that he made comments that he used his television appearances, on which he was critical of Robert Mueller’s investigation, as a sort of audition for his current job. Were those just glib comments or was he being honest?

Obviously, there seems to be no better way to hold public office than building your celebrity. Look at the White House’s current occupant. He couldn’t really run a business, or a reputable university, or even build a building, but he was sure able to make a lot of people think he could. And he’s not the first to do so. Ronald Reagan was an actor before he became a wildly successful politician; Jesse the Body Ventura leveraged a flashy career in professional wrestling into a governorship; Al Franken was funny as fuck on Saturday Night Live before he became just another senator to fall to scandal; and California elected the freaking Terminator as governor in a bizarre recall election that also included Gary Coleman and pornstar Mary Carey on the ballot.

It makes me think of Back to the Future, when Marty McFly lands in 1955 and looks up Doc Brown, the only person who could possibly believe that time travel was possible. Brown, as kooky as he is, asks Marty who the president is in 1985. When Marty answers truthfully, Doc scoffs, “Ronald Reagan? The actor?! Then who’s the vice president? Jerry Lewis?”

I was very young when I saw this movie. I didn’t know Reagan as an actor, just as president. My parents thought the joke was hilarious. I’m not sure if they voted for Ronnie or not, but I’ll assume they did, because didn’t everybody? I might not agree with Reagan’s policies now that I’m old and tree-huggy, but I still remember him being president-y, for whatever that’s worth. I’m also not one of those people who think famous people just need to shut up and sing/dance/play sports/act/direct movies/what have you. It’s a democracy, after all, and everyone should have a voice, whether I agree with them or not, but I do wonder what Doc Brown would say about where we are now.

Also, I’d like to ask him if he has any more room in that DeLorean, so I can flux capacitor may way the fuck out of this mess.