Look at the Bones! 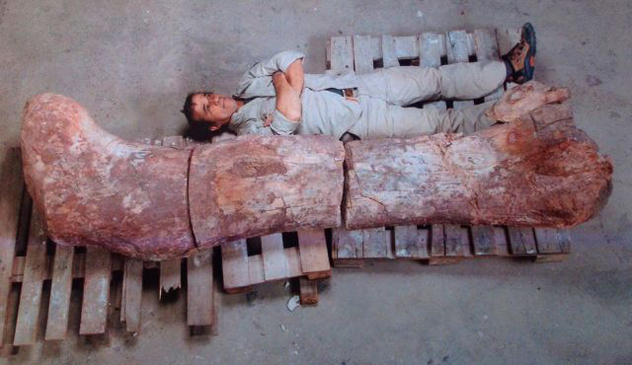 In either the greatest movie marketing ploy or greatest coincidence ever, the remains of what is believed to be the largest known dinosaur (and also largest creature to ever walk planet Earth) was discovered just days before Godzilla opened in theaters (hey! Read my review!).

Unlike Godzilla, though, and much to my dismay, this ginormous, prehistoric creature was actually real at some point. Also, it likely didn’t breathe nuclear fire (but who knows?), nor was it probably very fearsome despite its prodigious size. This as-yet-unnamed behemoth found deep underground in Argentina was likely a vegetarian.

Scientists believe the creature likely romped around in Patagonian forests some 95 to 100 million years ago, and, based upon 150 well-preserved bones, including a thigh bone that is taller than the average man, this titanosaur is estimated to have stood seven stories high when its neck was upright and weighed around 77 tons. That’s 11 times as heavy as your average T. Rex and equivalent to 14 African elephants.

As dino-expert Dr. Paul Barrett of London’s Natural History Museum succinctly put it, the beasty is a “genuinely big critter,” though he added a caveat in an article posted on Telegraph.co.uk that more research is needed before we crown this thing The Biggest Dinosaur EVAR.

I understand Dr. Barrett’s cautiousness here. He is a scientist after all, and they’re supposed to be governed by logic and the scientific method. From what I remember from high school, they’re supposed to come up with a hypothesis and test it until they can prove their theories, even trying their hardest to disprove them, in order to show that their ideas stood up to the most rigorous trials. That’s all well, and good, but I’m not bound by the same shackles here. I simply find something I think is really cool on the Internet and go, “OMG YOU GUYS,” which is a lot easier, and probably why I don’t get paid as much as they do.

So, like OMG, this is so awesome! This is the biggest lizard ever. I love this kind of stuff. When I was a kid, all I wanted to be was a paleontologist and dig around in the ground. I’d just assumed, I guess, that all you had to do was take a toy pail and shovel into any back yard and move some dirt around for a little while before you found a whole, perfectly preserved triceratops skeleton just beneath your mom’s petunias.

I know now it’s not like that at all. Mostly what these guys find are fragments, which they have to date and test and extrapolate upon to create a sort of mosaic of what they think this thing probably looked like. It’s got to be kind of frustrating. Like, I’m sure no one really understands what they’re doing out there.

“Oh, I’m out in the field looking for dinosaur fossils,” they’ll say to someone at a bar.

“Omigosh!” that person will answer. “Have you ever found, like, a whole skeleton like those things in the museums?!”

“Well no, not exactly,” they’ll answer.

“Not quite, but my team and I did uncover a piece of an orbital bone that we think might have been part of a skull of an apex predator that could have been even larger than T. Rex.”

So I can see why Dr. Barrett errs on the side of caution, but I definitely understand why the researches out there in Argentina who unearthed this thing were quick to tell the BBC, “Given the size of these bones, which surpass any of the previously known giant animals, the new dinosaur is the largest animal known to have walked on Earth.” I mean, to hell with propriety, just go for it! I also understand why they’d want to lay down next to the fossilized thighbone and take selfies with it. I’d Instagram the fuck out of something like that.

You’re just out there in the dirt and the heat all day watching all these excavations come up empty…then suddenly someone finds something and they’re like, “Holy shit! My job isn’t completely pointless! We gotta tell everyone about this!”

It’s kind of like how writing this column works. I sit around staring at the computer screen for a whole weekend wondering why I bother and that I’m never going to find anything to write about, and then Eureka! Hopefully future generations put these writings in a museum one day…right next to the dinosaurs. That would be pretty sweet.