Loving You Should be Easy Because You’re Beautiful 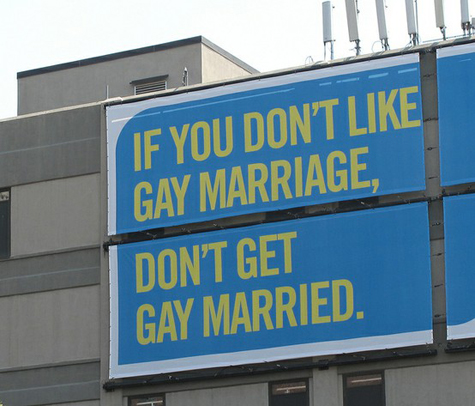 He’s here, he’s for queers and he’s not going to leave (well… we’ll see). President Barack Obama finally came out in an interview with ABC’s Robin Roberts. During an oval office sit-down, the president explained to Roberts that after an exhaustive examination of Cosmopolitan sex quizzes taken by Armed Forces servicemen, secret drone surveillance of gay districts in every major metropolitan city in the United States and fine tuning of his own gaydar, he has finally decided that gay people are, in fact, people too!

Republicans are up in arms (but definitely not each other’s) over the president’s official position. Many Republicans call the president’s move political pandering. Surely there is some truth in that; the timing was a little too perfect with the election looming. However, I believe that this explanation sidesteps the real issue. Republicans aren’t really mad that Obama is taking votes from Romney. Mittens never had a chance at those votes, anyway. Republicans are mad because they believe that allowing gays to wed will destroy the sanctity of marriage for all of us.

This, of course, is bullshit on so many levels. For starters, just take a look at the history of marriage. It wasn’t that long ago that a father gave his daughter to another man to marry in exchange for goods, livestock, land or money. This was known as a dowry and was quite common through the early modern era. At around the same time, other deals were sealed with trivial but deliberate gestures such as a handshake, a jump or a fart. Doesn’t that sound sanctimonious?

Even marriage in our own country has a shady past. This country did not allow African Americans to marry each other until 1893, nearly 30 years after the signing of Abraham Lincoln’s Emancipation Proclamation. It took another 48 years before blacks and whites could marry each other. Now that’s progress!

Unsurprisingly, those opposed to gay marriage aren’t too keen on history and the gaping hole it creates in their arguments. If you point these discrepancies out to Republicans, they might even fall back on a crazier position like claiming gay marriage will lead to people marrying animals.

I’m not sure how beastiality became the next logical step, but this shit is ridiculous. Gay people don’t want to fuck animals. Did I miss some groundbreaking study showing that people are fucking animals at an alarming rate and are clamoring to get hitched to their favorite pets? I haven’t seen any man/sheep or woman/horse couples out on dates, so I don’t think this will be a problem. If Republicans are truly concerned, then I think we can all agree to limit marriage to an arrangement between two humans.

When history and logic fail, Republicans are always quick to fall back on their one and only savior: religion. Unfortunately, J. Christ doesn’t speak on gay marriage, so instead they have to rely on good ol’ Leviticus. In the Book of Leviticus, God says to Moses, “Thou shalt not lie with mankind, as with womankind: it is abomination.” This is one thing on a list of many things God tells his followers not to do.

Oddly enough, Republicans never mention the other proscriptions in Leviticus. God also told Moses that he was required to burn any unchaste daughters of priests and that he could not wear a garment made of mixed fibers. Oh and I guess we better bring slavery back because God tells Moses to take foreigners as slaves, too.

Republicans hate it when you bring up slavery because it reminds people of civil rights, and the last thing Republicans want is for gay marriage to be considered a civil rights issue. The Republican National Committee Chairman Reince Priebus recently told CNN, “I don’t think [gay marriage is] a matter of civil rights. I think it’s just a matter of whether or not we’re going to adhere to something that’s been historical and religious and legal in this country for many, many years.”

Way to hit the trifecta of bullshit excuses, Reince! You are doing a great job of protecting something that is already broken. If 50 percent of all marriages in the United States end in divorce what exactly are we trying to protect? It’s time to let go of that mental picture of the perfect ‘50s sitcom marriage. You are living in a fantasy.

Gay people don’t have cooties. They aren’t going to trick straight people into marrying them. They aren’t going to marry your dog. They are capable of staying in committed relationships and have done so for quite some time. Besides, a successful marriage is a coin toss at this point. Why not let them play?