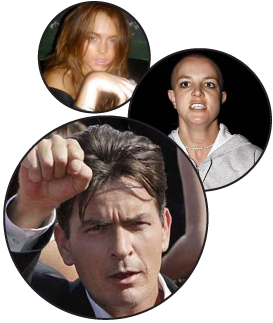 Anyone who has ever taken LSD can tell you that reality is a fragile thing. The one time I did it, I watched the grass crawl over the walkway of my friend’s house, and I thought to myself, “This is how the world will end.” Then we watched Space Ghost Coast to Coast and got a pizza and everything was cool. But you know, what is reality really? When I look at the letter B, do I see the same thing you do? What about the color green? We all know the sky is blue, but what is blue? Dude. You’ll just drive yourself crazy trying to figure out what really is real and what isn’t. Instead, be like Charlie Sheen and just be the master of your own reality, no matter how irrational it may seem to everyone else.

I tried my best to stay away from the Sheen Express this week, but it was impossible. He was everywhere. It was like a Sheen-meme-splosion on the Internet, and dude was giving interviews to everyone–Piers Morgan, 20/20, those trolls at Access Hollywood. I did my best to weather the storm, but it was useless. You can’t stand in front of a tornado and pretend it doesn’t exist. You either get out of its way or get sucked through the funnel. I opted for the latter.

I got sucked hard into the 20/20 interview. I just saw clips of the others, but it seemed like the same thing. What I enjoyed about Sheen’s 20/20 interview was that it was editorialized in such a manner that it laid out for me–in extremely simple terms–what I was supposed to think of the situation. Their verdict: Charlie Sheen is a fucking psycho. And they’re more than likely right about that. But that doesn’t mean we can’t take something positive away from his existence.

Let’s strip away all the fantastical elements of his life. He’s the highest paid actor in television history, he lives in a mansion dubbed “Sober Valley Lodge” with his goddesses (porn star Bree Olson (nee Rachel Oberlin) and model Natalie Kenly) and he’s imbued with tiger’s blood and Adonis DNA. What you have left is still a man that the vast majority of us are completely unable to relate to. The sheer volume of drugs, alcohol and whoring he has done over the course of his lifetime has killed lesser men, yet he survives–nay, thrives. Though he may spout off crazy shit like, “Clearly I have defeated this earthworm with my words, imagine what I could have done with my fire-breathing fists… I am a warlock,” as if he were a dude who just rolled into town on the Greyhound after a three-week meth binge, Sheen clearly isn’t destitute. He is, as he suggests, winning.

It’s hard to argue with him. Sure, his escapades may have gotten Two and a Half Men canned (for the rest of the season anyway), which I imagine put a lot of normal folk out of work, but when Lindsay Lohan got all bonkers on goofballs or whatever the fuck cocktail of chemicals she was ingesting, she shot her career in the face; when Britney Spears shaved her head and flipped a lid in the most epic way imaginable, just about everyone lost whatever respect they had for her. Charlie Sheen does a bunch of coke and chokes out a porn star in a hotel room across the hall from where his ex-wife and kids are sleeping, and a lot of people praise him as a hero or pop culture icon. Hey, I didn’t make that part up. It’s reality.

But what do I know? All of this is probably some well-orchestrated stunt. William Shatner seems to think so. In an interview with Michael Medved on his syndicated radio program, Capt. Kirk of the Starship Enterprise said that despite what 20/20 wanted us to believe, Sheen isn’t crazy at all. Though Shatner acquiesced that Sheen used unconventional means, to the captain, the maligned actor has been “perfectly in the moment.”

“He’s not crazy–to my mind–he’s just jagged and putting the interviewers on,” Shatner concluded.

Words to the wise. But don’t stress yourself out about it. Like I said, you can drive yourself crazy over what’s real and what isn’t. Just relax. It’s not like, say, there were politicians in office at this very moment who are trying to strip workers of their rights, inching us perilously toward a class war or anything. Dude, wait, what?