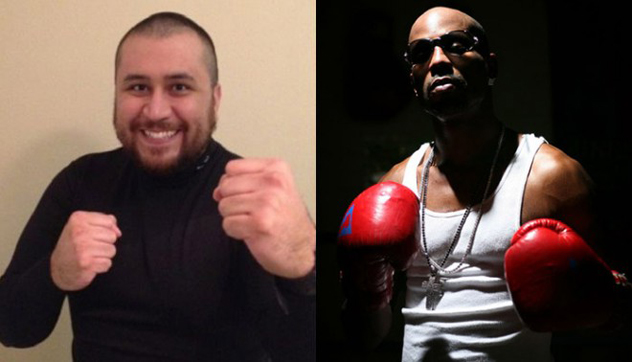 As the world gathers in Sochi, or as I like to call it, the Little Olympic Village that Could, we smile as every nation’s best and brightest compete against one another, shitty plumbing and hotels without lobbies to perform amazing feats. It’s a competition, sure, but if there’s anything that is present in all humans, it’s a spirit of (hopefully) friendly and healthy competitiveness. It’s nice to see that there are things that unite us. That’s what the Olympic Games are all about. You may watch the games (if you haven’t boycotted them) to feel the warm glow of togetherness…or maybe the attractiveness of the athletes just gives you a warm glow in your knickers (email me your list, and we’ll compare).

The Olympics are proof that athletic contests have the power to transcend the mere excitement of the games themselves, but they’re not the only sporting event that can accomplish that. Let’s take for instance the anticipated but now-canceled celebrity boxing matchup between George Zimmerman and rapper DMX, which ignited our intrinsic need to feel absolute fucking outrage.

It’s been almost two years since Zimmerman shot and killed 17-year-old Trayvon Martin for being a young black male… I mean in self-defense, according to a Florida jury. Since then, Zimmerman won’t just shut the fuck up and go away. He’s had problems with his wife, and then, in an effort to remind everyone he’s a fucking piece of shit, attempted to cash in on his “celebrity” by hooking up with celebrity boxing promoter Damon Feldman.

Other than his need to be in the limelight, Zimmerman also needed the cash thanks to his legal fees; though if you consider that his legal team was able to clear him of a murder charge for a crime he admitted to committing, I guess you could say it was money well spent.

DMX, for his part, said through a spokesperson that he never officially agreed to the boxing match, but could’ve used the money himself after filing bankruptcy. He also told TMZ that when he got Zimmerman in the ring, “I am going to beat the living fuck out him … I am breaking every rule in boxing to make sure I fuck him right up.” That certainly would have been a sight to see. I don’t know if DMX can fight or whatever, but even at age 43, he’s in pretty good shape. And though I was never really a fan of his rapping, I did admire his ability to yell on rhythm and make himself look like a bad ass. Again, I’m not sure if being able to shout all mean and stuff translates into being a good boxer. Perhaps that skill is more useful as a professional wrestler. However, even though he’s 13 years DMX’s junior, Zimmerman looks like a doughy little marshmallow-y bitch, so the smart money would have to be on DMX…unless of course Georgey boy was packing heat.

Alas, I guess we’ll never get to see DMX “fuck him right up.” Feldman decided to distance himself from Zimmerman, even though he acknowledged he was probably walking away from quite a payday. Feldman said over Twitter that people’s feelings meant more to him than all that cheddar.

“This was the wrong person to put in the ring and define celebrity boxing,” Feldman wrote of Zimmerman. “I’d rather be happy and make people happy.”

Free from Zimmerman, Feldman will just have to prey upon some other has-been celebrity desperate for cash and attention, which shouldn’t be too hard to come by. DMX was happy to report that this whole fiasco would have no effect on his upcoming touring plans. But where does this leave poor George?

It’s got to suck to know that even the guy who put Tonya Harding in the ring doesn’t want to have anything to do with you. If you can’t even worm your way into one of Feldman’s celebrity boxing circuses, what hope do you have left? How can you hope to find a job and become a productive member of society?

Maybe we should all follow Feldman’s lead and move on from this worthless prick. Gay and straight; black and white; Jewish and Muslim… we can all join hands and smile knowing that no matter how fucked up our lives are, at least we’re not George Zimmerman. It’s a warm, wholesome feeling—real community type shit. It makes me want to sing “Kumbaya.”