My Empire of Shit

We’ve all heard plenty about the economy. We all know it’s miserable. It’s gotten to the point now that its bleakness has become somewhat comfortable. Our Internet-shortened attention spans have made it so that we can’t remember a time when it was better. But even in this time of financial woe, there’s one sector of the economy that seems recession-proof. Late night infomercials are as prevalent as ever.

Infomercials have long been a staple of my late-night television diet. The TV in my bedroom is a cheap, off-brand tube set hooked up to rabbit ears. There is cable in other parts of the house, but I never liked having a lot of TV in my bedroom. It’s too distracting (from sleeping–not much else goes on in there). The last time I had cable in my bedroom, I’d find myself getting lost for hours on Cinemax On-Demand soft-core porn. The important thing is, the TV set receives PBS, the football games (in season) and infomercials, which lull me to sleep. 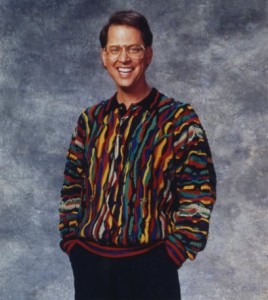 Mike Levey
When I was young, Mike Levey and his sweaters used to rule the infomercial-sphere with an iron fist. He was my gateway drug to late-night, program-length commercials. On Amazing Discoveries, he unveiled the Europainter, that car wax stuff and the gunk that would strip varnish off of furniture (which I suspected was the car wax stuff in a different container). All were hits. Mike Levey is dead now. His tersely worded Wikipedia entry says only that he died of an illness in 2003. It hardly seems to do justice to someone who played such a big part in my teenage years, and who’d helped me get the most enjoyment out of my insomnia.

There will never be another Mike Levey. Those were simpler, carefree times. In his place, I’m stuck with Klee Irwin, a harsh man with a harsh message for harsher times. Whereas Levey hocked a multitude of products, Irwin’s one-trick pony is the Dual Action Cleanse, which he purports will flush your intestines clean of all their caked on fecal matter. What I like about Irwin, other than his mustache and slicked back hair, is that he’s a modest guy. He apologizes profusely for being so graphic, but he regrets that there’s no other way to say it. The gist of Irwin’s message is this: You’re basically a walking sack of shit. It’s your fault, too–all those bad eating habits, all that red meat, all that coffee and alcohol and those scooter pies. You should’ve eaten more bran. 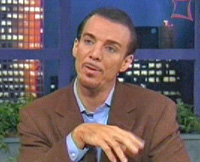 Irwin’s show is very much different than Amazing Discoveries. There is no pomp or studio audience. There are no wacky demonstrations or silly Australian dudes. There are just talking heads and cold, hard facts. But this is serious business. Irwin wants you to understand the gravity of the situation. That rotting fecal matter (again, sorry about being so graphic!) is causing you to have gas, bloating, bad skin, low energy, chronic halitosis, premature ejaculation, pancreatic cancer, the cooties and lycanthropy. If you’re not having two to three healthy bowel movements a day (and bless you if you have that kind of time on your hands), you may need to cleanse.

At first, my reaction to the show was purely lowbrow. It was all that talk about poop that helped me chuckle myself to sleep. But after a while, my opinion changed. I still giggled at all the ca-ca euphemisms, but what if Irwin was on to something? I couldn’t use the bathroom without examining the size of my stool. Perhaps the mind is more open to suggestion right before sleep, but after a while, I was almost convinced that I needed the product. I believed in Irwin.

Unfortunately, the Internet–once again–proved that faith is an antiquated notion. Tonight, I read an article that exposed Klee Irwin as a quack and warned readers not to buy his products. It was like the night I found out Santa Claus didn’t exist. Furthermore, in this down economy, isn’t it our patriotic duty to buy this shit that will make us shit?