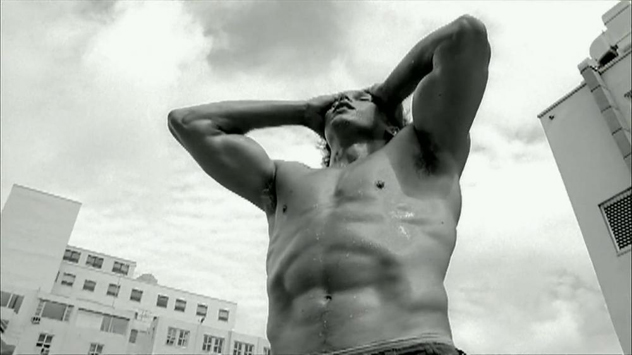 When I was a teenager, there were commercials going around for Bod, a body spray that was sort of a precursor to Axe. Whereas the ads for Axe were sort of tongue-in-cheek, the marketing behind Bod was a lot more direct. The commercials objectified men in the same way most ads objectify women. Chiseled dudes flounced around topless, playing basketball or some such dudely activity. Their pecs and abs were glistening with sweat, but not in the gross way you or I sweat; it was that sexy, dewy kind of sweat that happens in romance novels. It probably smells of fresh-cut lumber or new leather or something.

I’m not sure if it worked or not. Is Bod even still around? I know I can walk into any Walgreens and pick up any number of Axe products, but I don’t recall seeing an array of offerings from Bod. I remember one time, I was in a packed movie theater to see the premier of something that was probably effects-driven and stupid, and a Bod commercial came on before the trailer. Six-packs gyrated all over that giant screen, but instead of coos or catcalls from the audience, just about everyone (men and women alike) couldn’t stop laughing as a sultry female voice-over purred things like, “Nice bod,” or “I want your bod.”

Maybe it was the voice-over, or maybe seeing topless dudes prance around in slow motion is just silly. Or, maybe, Bod was using the wrong type of guy. Maybe, they should have employed doughy men like me.

I never knew how to describe my body type, really. Like, I’m not thin or in shape. I’m not morbidly obese. I’m just this sort of amorphous blob with a giant balding head. I’m pretty much the most nondescript-looking man in America. So much so that people will often tell me, “Hey! I thought I saw you the other day, but it turned out to be someone who looked just like you.” That’s pretty much because I look like every other guy my age in the country.

So now I can say I have a dad bod, because I used to be in better shape but then resigned myself to the fact that I like pizza way more than the treadmill. I mean, seriously, if you don’t feel the same way, I’m not sure we can be friends. And that’s cool, because a young woman from Clemson University said it is.

I won’t have to worry about losing weight for my wedding pictures, because right now, I’m pretty much at the pinnacle of male attractiveness. I shower enough not to be putrid. I throw a few servings of broccoli into my diet per week just to provide my body with enough real nutrients so it won’t shut down entirely and I’ll be able to poop once in a while.

This is relief, really. This is especially good news now that summer is upon us. I really like going to beaches, and in the past I’ve been shy about taking off my shirt. Even at my trimmest weight, you could never wash clothes on these abs. You could, however, use these abs to soak up spills, because they’re kind of spongy. That’s way more useful anyway. Washboards are so two centuries ago. We have Laundromats now, bro. But this summer, I’m going to kiss that shy guy goodbye, and treat my fellow beachgoers to the gloriously pasty expanse of my globular abdomen and the droopy, fur-covered forest of my chest.

The best part about this is I’m not even a dad. I get all the benefits of having a dad bod without having to pay and care for a young child. I can still stay up all night, like dads and moms sometimes have to, but instead of changing diapers or singing lullabies, I can just be a lazy fuck and binge watch things on Netflix or HBOGo. Last night I started re-watching season five of The Wire, you know, just for kicks. I also ate a bowl of cereal. How awesome is that?

All these years I harbored jealousy toward those dudes in the Bod commercials. They looked like they were carved out of marble, after all, while I was hewn from Silly Putty. But I bet they looked at guys like me with the same amount of envy as we crammed extra-large slices of pepperoni into our faces and played sports… on Sega Genesis, of course.

I’ve seen, though, that there has been a backlash against this “dad bod” thing online. People are saying it’s sexist because it lets guys off the hook, meanwhile women are often held to an unrealistic body image. …

Yeah, I mean, I got nothing on that. It’s totally true.