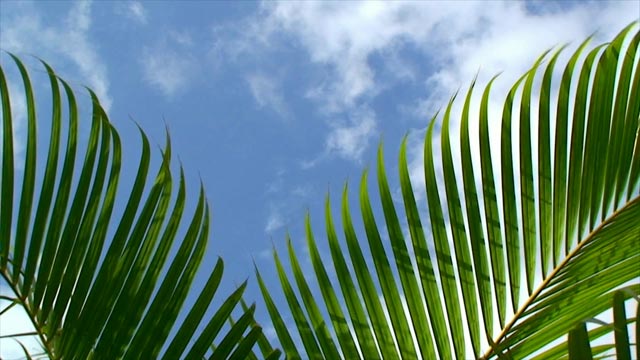 Unlike Christmas, Easter time is a much more solemn celebration—aftermarket bunnies and Peeps notwithstanding—because instead of the birth of a baby in a manger, which is cute, it involves betrayal, torture, execution and rising from the dead. I’m not sure what kind of gifts you’d bring to that kind of party, but I’d guess myrrh isn’t one of them.

Though Holy Week comes to a gruesome end, it does start rather triumphantly. April 5, Palm Sunday, began the Holy Week for Christians worldwide. The day is meant to signify Jesus’ entrance into Jerusalem, where he was greeted by throngs of followers waving olive branches and laying down palm fronds in his path—a sort of biblical red carpet. In churches around the world, masses were held to honor the end of Christ’s final pilgrimage, and in most all of them, palm leaves still play a big part in the celebration.

The weaving of palm fronds is a beautiful and diverse folk art tradition. In Ireland, leaves are woven into Celtic designs, while in Vietnam, the tradition is to create dragon shapes. In the Philippines, palm art also plays an integral part in the holiday. In the villages surrounding Lucena City, plied their wares to the pious outside St. Ferdinand Cathedral. According to an article on Inquirer.net, palm art techniques are passed down through generations and sold for whatever buyers are willing to pay for them. 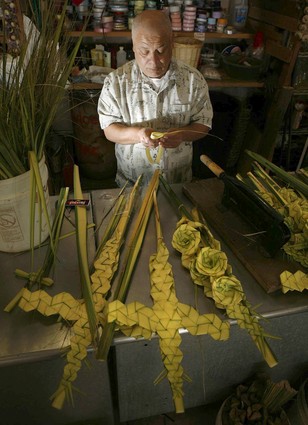 Here in the U.S., in Southern Californian Latino communities, the designs created with the fronds are spectacular. One such artisan, profiled in a recent article in the Los Angeles Times, is Esteban Torres who weaves the fronds into various geometric shapes, flowers and, of course, crosses. In the two weeks leading up to Palm Sunday, Torres, his niece and a couple employees bang out around 1,500 palm pieces from his tiny flower shop inside a Santa Ana strip mall. He sells his pieces for $5 to $7, which doesn’t seem to be a lot of money considering each piece requires a lot of patience and attention to detail, but the 52-year-old artisan says that his craft is a way of making up for not being a “perfect catholic.” It’s refreshing to see that catholic guilt is yet another thing people from different backgrounds can share in common.

And if you’re as familiar with catholic guilt as I am, maybe you’re wondering what sort of impact this tradition has on the environment. Fear not, ye of such worrisome faith, there’s an American organization that’s trying to take a modicum of remorse out of Palm Sunday. In 2005, The University of Minnesota started a project called Eco-Palms, which is not only environmentally friendly, but also people friendly because it ensures that those harvesting the fronds are paid a fair price.

Eco-Palms fronds are harvest in Mexico’s southern state of Chiapas and in Guatemala from trees growing wildly in rain forest. According to an article by the Associated Press, the these communities receive is enough to discourage clear-cutting what’s left of the planet’s rainforests to create farms. As a result, these communities get rebates that have in the past been used toward “scholarships for girls and to supplement teacher salaries.”

This year, around 2,500 congregations from every major denomination used fronds harvested as part of the Eco-Palms program for use in their Palm Sunday services. No doubt if your church did too, your boy Jesus would be stoked.