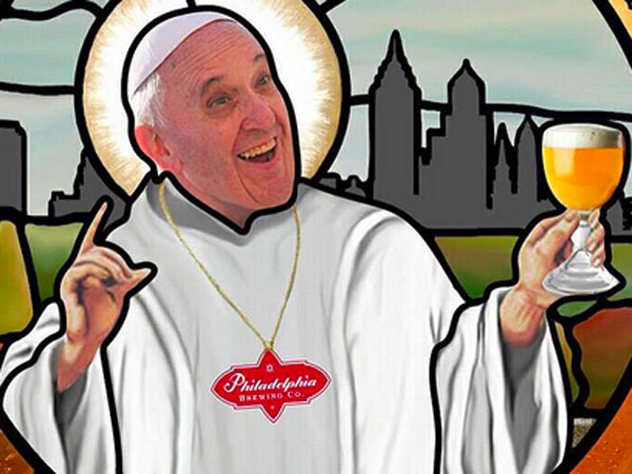 Pope Francis touched down in America this past week. As I write this, he’s spending his last day in the States in Philadelphia, the city that famously booed Santa Claus. I guess if any city needed a touch of holiness, it’s Philly. In his wake, craziness happened.

First off, on a personal note, his visit New York City coincided with the Mets clinching the National League East title for the first time since 2006. Something like this may not mean much to you spoiled Giants fans in the audience who have seen your team win World Series championships every other year, but for us Mets fans it’s a fucking miracle, clearly papal in nature. Thanks, Papa F.

The madness didn’t stop there. Pope Francis also had an impact on the U.S. economy. Merchandisers went nuts cranking out trinkets and knick knacks to celebrate (and profitize) the Holy Father’s visit to the East Coast. Hey, if you missed out on his visit, you can still go to Popefrancisvisit.com to pick up a few momentos. Perhaps a $12 calendar of prayers will help you reflect on economic inequalities around the world. If you need a little more reassurance, maybe pick up a life-size standee of the pope for just $160. Who knows? Maybe the Holy Spirit will speak to you through this Cardboard Conduit and give you the guidance you need to soldier through a difficult time in your life. I, for one, will probably need one when the Mets get bulldozed by Kershaw and Greinke in the playoffs.

Local merchants also had a field day with the Pope’s likeness. Plushies, T-shirts and buttons were cranked out to the joy of the clamoring masses, but those gathered in NYC and Philly were also blessed enough to ingest Francis’ very essence. Artuso Bakery in Bronx, New York, offered cookies graced with with Francis’ calming visage for you to devour or perhaps dunk in milk or coffee, therefore consecrating it. If you were in search of more adult fare, Philadelphia Brewing Company concocted Holy Wooder, which, according to its logo, was “The Official Beer of the Pope.” Unfortunately, this Belgian-style triple was only available on tap, so your liver probably won’t have the chance to be blessed by this unsullied spirit.

Pastificio Deli, also in Philadelphia, molded mozzarella into pope shapes in honor of the Holy Visit, but they’re almost too creepy to mention.

I just felt a shiver.

However, Pope Francis’ biggest impact on the United States, at least in the immediate future, may have taken place in Washington D.C. No, no one carved a Francis statue out of colby jack, at least not to my knowledge, but his presence may have precipitated a big cheese’s decision to step down.

Adios, Speaker of the House John Boehner. I have to admit, I was shocked to hear that he was stepping down. I mean, sure, he broke down into a sobbing mess as Pope Francis addressed an enthused crowd of onlookers from the balcony of the U.S. Capitol, but it’s not like he hasn’t cried before. Dude breaks down in public on the reg. But, as the Internet was quick to jump upon, this was a cry of epic proportions.

Did you see his face?! It was like watching a covered pot over boil. The lid tries its hardest to keep it together, but it’s no use. That shit is going to blow. I’m not a fan of Boehner— we probably wouldn’t agree on much of anything politically— but I do kind of admire the fact that he’ll just lose it at the drop of a hat. Politics always seems so orchestrated and focus-grouped, but this guy devolves into a simpering mess no matter how many people are watching. It’s kind of endearing, if not sort of pathetic.

With another big vote to avoid a government shutdown on the horizon, and pressure from the more extreme yahoos in his party to stick it to Obama if for no other reason than to stick it to Obama, maybe the Pope, with his message of togetherness and acceptance made Boehner realize that he and the rest of Congress, on both sides, have just been a bunch of dicks. The Sunday after he announced his resignation, Boehner told Face the Nation, that he believed that hardline conservatives were “unrealistic” about what government could do and referred to those members of his party as “false prophets.” Pretty tough words from a crybaby. Kidding. Sheesh.

By now the Pope is on his way back to a Popetopia, leaving a very different America behind him, an America where the Mets may be World Series champions. That’s certainly an America I’d love to live in.