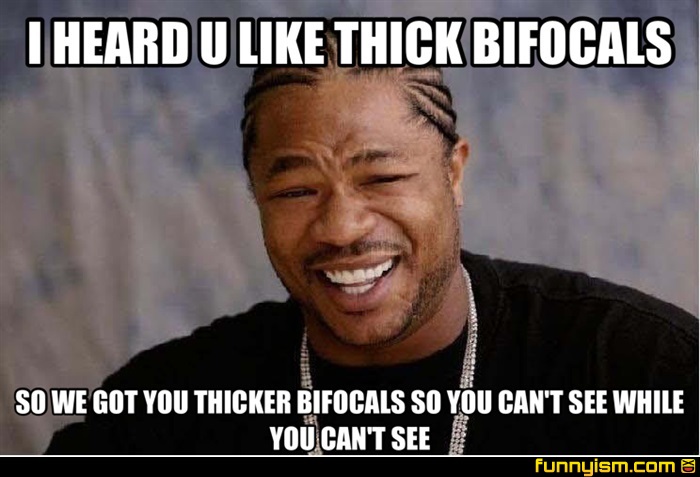 I heard today that there are massive power outages in Argentina and Uruguay—though I guess massive is an understatement. NPR said that Argentina and Uruguay are completely without power. How does that happen? I’d also heard that Sudan has been without internet for 13 days. The reason for this outage was more easily explained. The Sudanese government pulled the plug on the web to crack down on online activism. But as I’m writing this, I have no idea if either of these situations have been rectified (though I hope they are, truly), because I’m a bit preoccupied with my own bullshit. You see, my eye doctor just prescribed me bifocals.

Glasses are nothing new for me, mind you. I’ve never been too keen on putting a piece of plastic or whatever in my eye, and I’ve been wearing glasses for so many years, that I don’t recognize my face without them (mostly because I can’t actually see my face without them). During my last eye appointment, though, my optometrist, who in addition to being a very capable doctor also happens to be a very attractive young woman, pointed out to me that bifocals would make my life easier. I didn’t want to believe her, of course. I never really thought myself a vain person until a pretty doctor told me, in so many words, that I’m a doddering old fool who required coke-bottle specs to read the paper while I drink my decaf coffee, or to play canasta, or whatever it is that old people like me do.

Of course, she didn’t put it like that. I believe she said, “They’ll help you read,” but I knew what she really meant. I declined the bifocals prescription then and just got regular lenses. She said she understood. I took her pity as kindness.

But in the months since, the problem has gotten worse. I’ve had to take my glasses off to read or edit the articles you see here in these pages, or just hold the printout of each article at a particular length away from my face so I could read it … And then bring it closer so I could mark the page with corrections, which would make me lose my place because the letters got all blurry when I brought it back close. It was all very frustrating. So, when I got the text that it was time for me to visit the optometrist again, I knew I would have to swallow my pride. It was time for bifocals.

I should stop here and mention that they’re not “bifocals” any more. At least not in the way that I remember them as a kid. They call them “progressive lenses” now. This isn’t just a politically correct term for bifocals, they’re actually different than they used to be. You can’t tell they’re bifocals if you’re not wearing them. They just look like regular eyeglasses, but for the wearer, it’s like being in The Matrix or something. You get a different lens effect depending on where you look. I haven’t gotten them yet, but the people at the office already warned me that I’ll have to change the way I look at things.

“You’ll have to train yourself to point your nose at what you want to look at,” the technician told me.

“If you just point your eyes down, it’ll look like the floor is coming up to meet you,” my optometrist said. So if you ever see me trying to walk downstairs, and I just start screaming in fear for seemingly no reason, now you know why.

Honestly, I’m a little freaked out by all this. I get dizzy playing video games. Now my life is basically going to be a video game. An exquisitely boring video game to be sure, but nonetheless, I just hope I don’t puke.

Now I fully understand that there are worse things in the world. I have my health and my sight, for the most part. A roof over my head. A healthy marriage. These are all things to be grateful for. Sudan, Argentina, Uruguay—and we’re frighteningly close to war with Iran the last I heard—I know these are real problems far worse than simple wounded pride. But try to walk a mile in my shoes … if you can. Whatever you do, don’t look down, because it’s gonna look like the ground is trying to mug you.