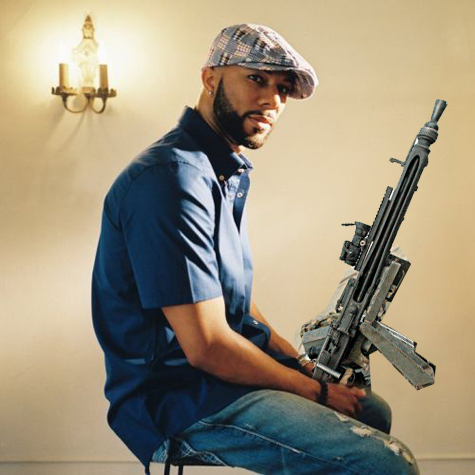 Let’s see…what’s been happening in the news lately? Royal wedding? That was a pretty big deal. Oh, wait, Osama bin Laden’s dead (OR IS HE (lol j/k he is, assholes, they said so on television)). I guess I could write about that. I don’t know. It’s been a pretty slow couple of weeks. Or, Common is suddenly the most controversial hip-hop star in America. OK, fuck it, why not. Let’s go with that.

When I was a kid, I remember Ice-T came out with a song called “Cop Killer” for his rock band Body Count that got everyone all pissed off. Let’s be fair, here. The lyrics of the song are pretty vile: “I’m a cop killer, better you than me/Cop killer, fuck police brutality!/Cop killer, I know your family’s grieving, (fuck ‘em!)/Cop killer, but tonight we get even, ha ha.” My father wasn’t a cop, but he was a Bridge and Tunnel officer at the Verrazano Bridge in Staten Island, N.Y. He carried a badge and is a member of the Fraternal Order of Police. When I first heard the song, I wasn’t a fan (I’ve heard better), but whatever. It’s not like you don’t see violence against cops all over the place in movies, books and television. For instance, The Godfather is one of the greatest movies of all time. One of my favorite scenes is when Michael Corleone steps out of the bathroom of the Italian restaurant, pistol in hand, and executes a rival kingpin and police officer while everyone else is eating spaghetti. I could be wrong, but no one vilified Francis Ford Coppola as condoning violence against the police (well, they probably would have if he were black (lol j/k…actually, that time I wasn’t kidding)). It’s art. It’s just expression.

It would be a different thing entirely if Ice-T had killed a cop, or anyone else for that matter. That’s a crime. Singing about a crime isn’t a crime. It might be in poor taste, but that’s something that’s up to listeners to decide, I guess, and they often do. Of course, that song came out years ago, when Ice-T was no doubt a brash young man striving to make a name for himself with his talent–or at least his ability to piss off/frighten white people. Nowadays, Ice-T is a lovable (practically cuddly) mainstream star. In fact, my mom regularly watches him as a star on Law and Order: Special Victims Unit, a show on which he plays, of all things, a cop. “Cop Killer” is a distant memory, and that’s most likely for the best for all of us.

Now this Common thing is strange to me. He was invited to read some poetry at The White House. This didn’t surprise me at all, because my mental image of Common is a kindly, intelligent-looking man, rocking the bald head and beard a la Jimmy B. (because that’s my name for myself when I refer to myself in the third-person). In my mind, he’s the epitome of “conscious” rap, which again, in my mind, is a form of rap music loathe to refer to women as bitches or in any way measure a man’s worth by the size of his automobile’s rims. I have to plead some level of ignorance, because I’m not very familiar with Common and I’m not a fan of “conscious” rap. I like dumb shit like Flo Rida’s “Low” and strip club anthems like Fat Joe’s “Make It Rain.” Conscious rap makes me think about feelings, and it’s hard for Jimmy B. to sound tough in his car when he’s rapping about his feelings. So having Common recite some poetry at The White House seemed like a solid move.

I was actually shocked to hear that Common had “a pro cop-killing stance in two separate cases,” according to Bill O’Reilly on The Factor. Woah. Common wants Jimmy B. to kill a cop?

Well, maybe not. One of the “cases” O’Reilly is referring to is “A Song for Assata,” a song dedicated to Assata Shakur that was released on Common’s 2000 album, Like Water for Chocolate. Shakur was convicted of killing a police officer in a New Jersey Turnpike shoot-out in the late ‘70s. She escaped prison in 1979 and has been living in Cuba on political asylum since 1984, and though the details of the case were a bit murky, she perhaps isn’t the most positive role model. The second case of Common’s pro cop-killing stance was speaking out on behalf of another convicted cop-killer, Mumia Abu-Jamal, but Common’s not alone in that regard. Everyone from Snoop Dogg to The Black Crowes have come out in support. Even Chumbawamba chanted “Free Mumia Abu-Jamal” on an episode of The Late Show with David Letterman in 1997.

So, wait, what does this all boil down to? Does this mean The White House condones Common’s condoning of cop killing? Does anyone really think that’s the case? You know, we were all pretty stoked when Osama bin Laden was killed. People were celebrating on the streets near Ground Zero. Maybe they were acting with a bit too much hubris, but I can understand it. I’m not going to miss bin Laden now that he’s gone. Good riddance. He was a bad guy. But it is nice to have bad guys–an enemy who’s clearly an enemy. Unfortunately things aren’t always so easily black and white; except, like in this case, when they clearly are.