Somewhere, Beyond the Sea 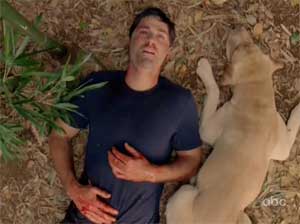 Not too long ago, I was sitting in a car, talking with a friend of mine. We were outside his house and I was double parked; however, I was pulled over enough so that people could get by me. The few people who drove up the street did just that without so much as a beep of their horns or a flash of their high beams–all except one.

It was a gray SUV/minivan/station wagon thing. The sort of vehicle you see in every garage and/or driveway in suburban track homes. It pulled up behind me and didn’t budge. After a few seconds, I shifted my car into park and pulled ahead to an empty spot on the right. The gray SUV pulled up behind me, stopped, and then pulled back onto the road and parked at the curb on the opposite side of the street. Its engine went quiet. I smirked and said to my friend, “I get the feeling we’re about to get into a fight,” but no one stirred from the vehicle.

Some time later, a police car headed down the street. The police car slowed as it passed my friend and I, but other than that, the officers inside paid us no mind and continued on their way, heading the wrong way down the one-way, residential street. The squad car made it down to just about the end of the block when the gray SUV awakened from its slumber. It started up, and without turning on its lights, pulled away from the curb, making a right turn through the red traffic light at the top of the block. My friend and I both sensed something foul afoot.

Another car headed up the street. I realized it was the same squad car that just drove by, so I rolled down my window and flagged down the cops.

“What’s going on, buddy?” the officer in the passenger seat asked. I’ve thankfully had very few encounters with law enforcement, but in each instance the officer in question has referred to me as “buddy.” Do I look like a “buddy?”

I told the police officer what had happened. He asked me if there was a man and a woman inside the vehicle. I answered that I didn’t know, because it was dark and I wasn’t able to see anyone.

The squad car drove off in the same direction as the dubious SUV.

That’s where the story ends.

I like to come up with different scenarios about just what was going on in that SUV. Could it have been drug dealings, prostitution, kidnappings, murder? These are all plausible theories. Or, what if it was something more far-fetched than that, like a terrorist plot or the sort of thing that would get Agent Mulder in a tizzy? A secret rendezvous between two agents of some clandestine organization. Who knows, right? I’ll probably never know. It’s one of life’s many mysteries that go unsolved, a trivial thing that at most allowed me to fill up some word count in this space. It was suspenseful at the time, but after its passing, really didn’t matter that much in the grand scheme of things.

That’s more or less how I feel about the Lost finale, except Lost was one of the most important things to happen to me over the past six years. As much as I wanted the final season to bring me closure, I worried that the writers would attempt to answer everything in the show’s final throes–perhaps even having Jacob field questions from the remaining survivors of Oceanic Flight 815, calling upon them one by one with hands raised.

Those who were expecting every tiny loose end to be tied up in a neat bow probably hadn’t been watching the show too closely over the past six years. An article on TVSquad.com said, “Ultimately, Lost was a show for the anxious, uncertain, post-Sept. 11 nation we have become. We’ve had to accept ambiguity as a fact of life, and we seek answers and closure, though none may be forthcoming. We’re leery and skeptical about science but riddled with doubt about faith. To the extent that Lost was about the journey and not the destination, about the drive to solve riddles rather than the solutions themselves, it was the show that best explained us to ourselves.”

This may be a pretty pretentious analysis of a show that featured time travel, a space-bending donkey wheel and a smoke monster, but it does make some valid points, not only about the show, but the time in which it aired. Most people I know are filled with so much doubt about the economy, environment, government, world peace, hot topic du jour, what have you. I suppose I struggle with the same doubts every day, the most difficult of these is why I bother getting out of bed most mornings. I mean, really, why do any of us? I like the mystery, though, because once you’ve got everything figured out, all life’s little happenstances like suspicious vehicles and hokey television shows must seem pretty boring.