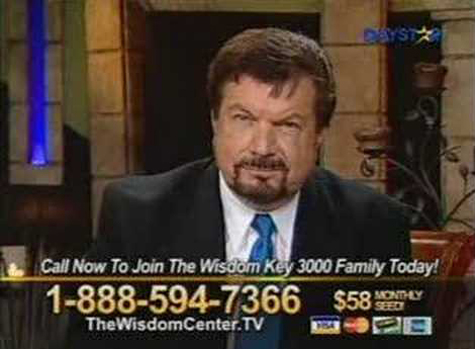 My love for late-night infomercials is well documented. I love the gimmicks and scams and personalities; the ultra-fake talk-show format, the spectacular acting and the paid studio audiences. Do infomercials exist in foreign countries? They probably do, but they feel like a uniquely American art form.

Lately, my infomercial viewing has found religion, and why not? Organized religion is probably humankind’s longest running and most successful infomercial. Religion has the best gimmicks at its disposal, be they supreme saviors rising from the dead or an afterlife filled with a billion virgins. Not even Ron Popeil could touch that, not with all the Pocket Fishermen or RonCo Food Dehydrators in the world.

Before I go any further, I should mention that I don’t have any problem with religion. I think religion, at its core, is a beautiful idea. It brings people together and makes the impossible to understand–i.e., “Why are we here?” “What does it all mean?” and “What happens when we die?”–far less daunting. You could throw all the science you want at these questions, and I bet everyone would fawn all over you for being a big ol’ smarty pants, but it wouldn’t provide anyone much in the way of comfort, understanding or community.

Religion’s a wonderful tool. When placed in the right hands, it can do wonderful things for a lot of people. So, this column isn’t targeted at you or your wonderful pastor, priest, rabbi, imam or shaman. What I’m talking about here is the snake-oil salesmen, or the wolves in sheep’s clothing, or, more specifically, Dr. Mike Murdock.

Dr. Murdock is everything you’d expect from a televangelist. He’s charismatic–even funny sometimes. His speech can go from soothing to fiery at the drop of a hat. He has great hair. My favorite feature, though, is his nearly invisible headset microphone; it’s so small and well concealed, it looks almost like a Tylenol capsule that hovers just above the corner of his mouth.

Murdock’s key gimmick, as far as I can tell, is his Law of the Seed. He advises on his program that if you sow seeds, God will grant you a harvest. The “seed,” of course, is a parable. He’s not asking his faithful to start a garden, though he doesn’t seem outright opposed to the idea. Have at it. Plant some tomatoes, but if you want to plant a seed with God and reap the benefits, according to Dr. Murdock, it’s best if you send cold, hard American Cash.

Tithing and religion have always gone hand in hand. The custom varies from sect to sect, denomination to denomination. God’s all-seeing and all-knowing, according to another great earthly prophet named George Carlin, but he’s just not good with money. He needs it, maybe; or more likely the church needs money to pay civilian employees, keep their cupboards stocked, and if they’re doing the right thing, for charitable programs in their community. But how much should you give, if you’re pious? Pocket change? Ten percent of your salary? It’s so ambigious. Dr. Murdock eliminates that tedious guess work–$1,000 will suffice.

He understands that the economy is bad. People are getting laid off, are losing or have lost their homes. They’re riddled with debt. But none of these things should be seen as obstacles in getting on the phone and dropping a grand (operators are standing by). If you’re buried under a pile of credit card debt, you surely don’t have anything to lose. You can charge your seed to your Master Card and hope it blooms before the bill comes.

Dr. Murdock doesn’t seem to be turning down the smaller donations. Those are fine. But if you want a big harvest, $1,000 really is the way to go. You get what you give and all that. He says, on his late-night, fake talk-show-style infosermonmercial that you can’t buy a miracle for $1,000. Heck, you couldn’t buy a miracle for $1 million, but if you sow a $1,000 seed, you can expect a “harvest.”

Did you see what he did there? It’s the kind of clever word play you’d expect from a doctor. I’m not sure why it’s different to try to buy a harvest from God instead of a miracle. If I’m forking over $1,000 to a supernatural being for something, I’d at the very least like to have some water turned into wine. I guess I’m just a man of little faith. Still, as with any infomercial, the more times I see it, the more it makes sense. Who knows? Maybe Dr. Murdock is on to something. Unfortunately, I am low on cash, so if anyone wants to go in on a $1,000 seed with me, let me know. I promise I’ll spread the harvest around.