Thanks for the Memories 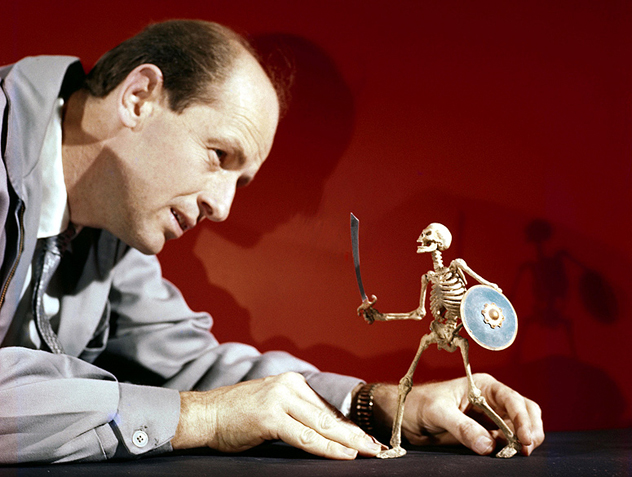 A few days ago, Ray Harryhausen passed away. I got the news over Facebook, which is where I find out about all celebrity deaths nowadays. Most of the time, I’m not affected all that much, but this one hit me pretty hard.

You may or may not know who Harryhausen was, but he was one of the most influential figures in my life. He was a stop-motion animator who brought myths and gods to life. His film credits include Clash of the Titans, Jason and the Argonauts, Mighty Joe Young and One Million Years B.C. He was 92 years old.

When I was in kindergarten, I had a Clash of the Titans-branded lunch box—one of those tin jobs with the plastic Thermos inside. The front was a relief of the scene where Perseus, riding upon the winged horse Pegasus, stares down the monstrous Kraken, holding the severed head of Medusa aloft. I’d seen the movie more times than I could count. The Medusa scenes scared the shit out of me, so I usually covered my eyes for those, but I was completely blown away by what I was watching. There were giant scorpions emerging from the ground, blind witches, three-headed dogs and all kinds of other critters. I didn’t know who Ray Harryhausen was, mind you, but it was like I was watching magic on screen…the real kind, not that David Blaine shit.

I held onto that lunchbox for years, well into third grade even after some spillage had caused the interior to rust. My mother wanted to throw it out because that couldn’t have been healthy, but I begged her not to. She covered the inside with contact paper so I wouldn’t get sick from sticking my lunch in the nasty old box. Thanks, Mom. Happy Mother’s Day.

Monster movies were all I watched growing up. Anything Godzilla was good. Harryhausen didn’t have anything to do with those, but there was The 7th Voyage of Sinbad and The Beast from 20,000 Fathoms. Both were favorites that I’d watch over and over again, and both were the result of Harryhausen’s painstaking craft. He’d build fantastic creature models and move them inch by inch, taking pictures with a 16mm camera and then blend them with live actors in such a way that you’d think they were actually real. Sure, if you compare it to the computerized wizardry of today’s special effects films, they’d look silly or childish, but there was a heart to Harryhausen’s work that’s lacking in modern movies.

It wasn’t until years later that I knew that all of these films could be traced back to one man. I admired him endlessly for it. When I was an adult, I had the privilege of interviewing him for another publication, and it was one of the biggest thrills of my life. I had to wake up in the wee hours of the morning and spoke with him over the phone from his home in England. I told him what a big influence he’d had on my life, and he seemed genuinely grateful and humbled to hear it. Here’s a guy who’d influenced important filmmakers like George Lucas and Steven Spielberg, talking to me, who doesn’t have a resume nearly as impressive as those guys, and he was still so gracious. It was a moment I’ll cherish forever.

Though I didn’t know his name as a child, Ray Harryhausen was the first person who really inspired my imagination. This past winter, before he passed, I decided to get my first tattoo. I chose Bubo, the mechanical owl who’d helped guide Perseus through his adventure in Clash of the Titans. I got it to remind myself that even though I’m getting older and have a serious day job now that having an imagination is still important. If it wasn’t for Harryhausen, I probably would’ve ended up a banker or something like that. Maybe I should be upset, because if I had gone on to more lucrative pursuits, my credit rating wouldn’t be as shitty as it currently is, but I’ll be forever grateful to him for inspiring me to follow my creative passions. If it weren’t for his films, I probably would’ve never wanted to tell my own stories by becoming a writer. So, thanks, Ray. You will be missed.