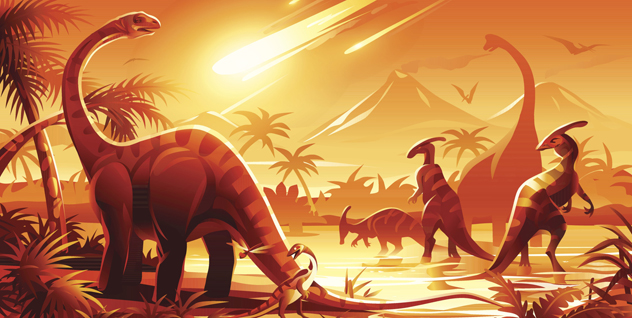 There are plenty of things in life we should be racing toward. Progress, wiping out poverty, curing cancer, the salad bar at Sizzler: these are all things we really need to get a giddyup on. Mass extinction is probably not one of those things. According to a study from Stanford, though, we’re currently smack-dab in the middle of Earth’s sixth major extinction event.

The first five mass extinctions were probably before your time. Believe it or not, they were before my time, too. They were back in dinosaur times. Nowadays, the only dinosaur that exists lives in the murky depths of Loch Ness, chillin’.

It’s difficult to mourn the loss of the dinosaurs, though. Their deaths did a lot for us. For starters, the first mammals would’ve had a pretty difficult time evolving into Homo sapiens with T. rex tromping around. Secondly, their decomposing bodies make it possible for you to drive your oversized SUV. I mean, how else would you be able to get all that shit you bought from Costco home without your Ford Expedition? In fact, all those fossil fuels probably had a lot to do with the production of all those products, as well as their shipment to Costco and other big-box retailers. And what about all the people who are employed in the shipping, packaging, producing and retailing of even one econo-sized tub of Lysol Disinfectant Wipes? Each bacteria-fighting wipe encased therein probably represents one salary paid along the supply chain. When you think about it, you owe your entire life to dinosaurs, or at least the death of them. Instead of heading to church on Sunday, you should probably pack the wife and kids into the Family Truckster and drive down to whichever natural history museum you prefer and pay homage to the remains of the creatures that made your iPhone possible.

No. No, it must be, especially because this time around, it’s mostly our fault. According to the Stanford study, species are disappearing at a rate that hasn’t been seen since the Cretaceous-Tertiary 66 million years ago.

From an article on the topic posted at Nzhearald.co.nz: “Using fossil records and extinction counts from a range of sources, the researchers calculated the normal ‘background rate’ of extinctions and compared it with a conservative estimate of present extinctions. Natural population changes in the wild usually lead to two species of mammals dying out every 10,000 years. But the rate is 114 times that level.”

Stanford pointed the finger for this sharp increase on humans, because, well, when you think about it, humans really are to blame for all of our problems. Habitat loss, pollution and climate change have been the big three for wiping out Earth’s furry (and feathery, slimy and scaly) cohabitants since the 16th century. But even back before people started carving up the Earth into countries and strip mining and clear-cutting, we were basically just a bunch of jerks. Our early ancestors from thousands of years ago were most likely to blame for the extinction of wondrous Australian critters such as the giant wombat and flesh-eating kangaroo … the latter of which sounds scary as fuck.

So yeah, we suck. It’s not like it’s anything new. It’s become fashionable to hate on the human species, and it’s totally warranted. We’re the reason why we can’t have nice things. We stand in the way of real social progress for no good reason, shoot up churches in South Carolina because we’re ignorant racists and profit off of polluting the only planet we’ve ever called home. The only thing we’re really good at is making a complete mess of everything.

Thinking about this stuff makes me mad. Not really mad enough to affect any real change in myself or the world around me, but mad enough to point the finger and place blame. Like, the dinosaurs, who really caused this stupid mess by becoming extinct and all that. You’re telling me y’all were the most dominant creatures to ever walk the Earth, ruling the roost for hundreds of millions of years, and in all that time none of you were able to evolve a big enough brain to come up with a blueprint for how future generations and/or species could become responsible Earth stewards? You had all that time to show us how to craft a great and lasting civilization, and you squandered it. We’ve only been around a few hundred thousand years and we’ve already got a Large Hadron Collider doing God knows what over there in Europe. Thanks for nothing, guys. Now I don’t feel so bad about Nessie living all alone in that Scottish lake. I hope she fucking rots down there.