I’m toeing a difficult line between gym rat and fat ass. I’ve gotten quite hooked on going to the gym, but I can’t stop myself from eating. In fact, I think I eat more now than ever. Is that a good thing? I keep hearing that you should eat more often, just in smaller portions, throughout the day. I guess I can vibe on that, but what’s the recommended daily portion of a cheese steak?

This time of year makes eating right more difficult. The winter holidays and Thanksgiving bear the brunt of most people’s gluttonous ire, but Easter is a silent killer. Its still heavily religious connotations have left it somewhat marginalized in the canon of major holidays (odd, considering we live in such a predominantly Christian nation), but nevertheless, the American Junk Food Machine proves that it can turn any occasion into a reason to gorge oneself on sweets—even a holiday commemorating the days a compassionate and well-meaning young spiritual leader gets tortured and killed and then rises as The Most Holy Zombie ever. (I’m paraphrasing.)

I get sweaty this time of year, because every supermarket/mega drug store/titanic department-store-conglomerate-thing’s checkout counter is lined with treats. Sure, this is nothing new. There’s a plethora of chocolate snacks readily available anywhere you pay for your milk, bread, batteries, auto supplies and what have you just about anywhere in the country: Hershey bars, myriad Reese’s chocolate/peanut butter hybrids, the entire Twix family of candied cookie things, every flavor of gum and breath mint imaginable, enough brightly packaged junk to give Willy Wonka a boner. But Easter time is different, because the shit you can get now is only available once a year. Halloween has candy corns and perhaps smaller versions of more familiar candies cloaked in spooky wrappers, but Easter has truly cornered the market on seasonal snacks.

I’m such a sucker for stuff that’s seasonal. Anchor Steam makes a Christmas beer that’s only available between November and January, and I crave it always. But if it was offered year-round, I probably wouldn’t like it nearly as much. The same holds true for Cadbury CrÃƒÂ¨me Eggs, typing the very name of which causes me to drool a bit. 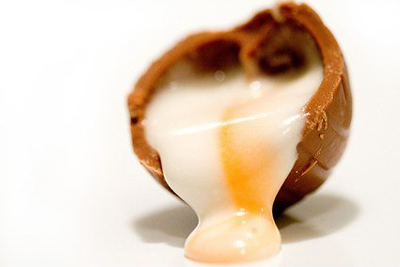 When I was younger, Peeps were the thing. Perhaps it was the cute shapes or more likely the fact that they were just sugary marshmallow gook covered in more sugar, but I couldn’t get enough of them. I found they were best enjoyed when stale, so when my parents presented me with my Easter basket, I’d nibble through the chocolate eggs and gnaw on one of those brick-like solid milk chocolate bunnies right away, but the Peeps required more time to properly savor. I’d slit the package, maybe eat one raw, but leave the rest to ferment and harden a few days. That sugar would form a thick crust, and the marshmallow gook would congeal a bit, giving the entire confection the consistency of those Styrofoam peanuts used in shipping packages.

But now I’m older and my tastes are more refined. Cadbury CrÃƒÂ¨me Eggs are bar none the king of Easter candies. That accent over the “e” lets you know that this is one sophisticated snack. The foil wrapping can get hard to remove, depending on the room temperature of the store you’re buying them from (if you can find them”¦those things go fast), but digging small flecks of colored foil out of the egg’s buttery chocolate shell is part of the fun, I guess. So is the trail of crÃƒÂ¨me mucous that sticks to my beard stubble as I devour one. I’m not sure what makes up the gooey, sweet slurry that fills one of these chocolate-covered sugar bombs. In fact, I’d rather not know. I like to think of it as equal parts bliss, heaven and ZOMG.

At least Easter dinner doesn’t carry the same amount of traditional grazing that its holiday brethren do. Maybe that’s because warmer days make bellying up to a dinner table for four hours seem less appealing. Also, there’s no shitty football games to veg out to afterward, so what’s the point? Still, if I keep ingesting Easter-themed treats at the same rate I have been the past few days, the only thing that’s going to be resurrected this holiday season is my post-Christmas gut.