The Future’s So Bright, I Gotta Wear Shades 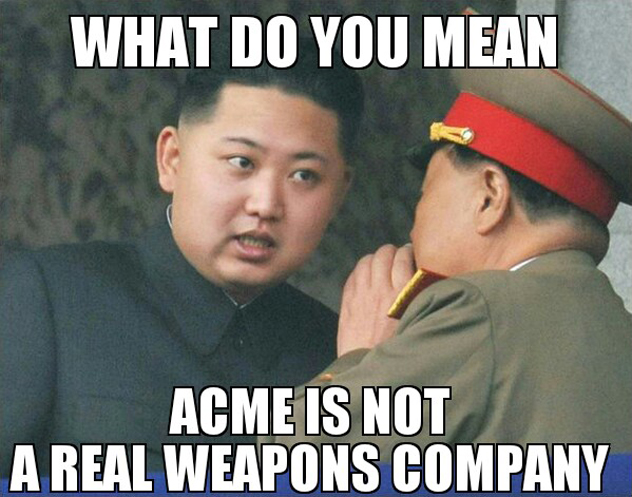 Remember the good old days? When North Korean leader Kim Jong-il passed away, I wrote that I’d miss him. He was just so cooky, you know? When he was gone, I was hopeful that his successor, Kim Jong-un wouldn’t be as nukey. Unfortunately, it looks like he’s every bit as bomb-crazy as his Papa Bear was, but without the sweet hairdo.

In recent weeks, Kim the younger has been all about the nukes. He put an end to the ceasefire between North and South Korea and has just been causing all kinds of fuss with his crazy war threats. Look, I’m sick of it. Just pull the fucking trigger already.

I’ve been dealing with this nuclear war nonsense since the goddamn ‘80s. That was 30 years ago. Some of you might not have been born yet, but let me tell you, it was a pain in the ass. Everything was about nuclear holocaust. That’s all anyone ever thought about. No one gave a shit about zombies or terrorists. Both of those things suck, but nuclear bombs are way worse. Like, if you were to arrange zombies, terrorists and nuclear weapons into a game such as Rock, Paper, Scissor, you could argue whether zombies would beat terrorists or vice-versa, but it really wouldn’t matter because nuclear weapons would fry the fuck out of both of them. There’s no rebuilding after a nuclear holocaust. It’s pretty much just handing the keys to the planet over to the rats and cockroaches and saying, “Thanks for letting us run the place for a while, dudes, hope you take better care of it than we did.”

The threat of nuclear war has permeated pretty much every aspect of my being since I was a young tike. It’s all over TV and movies: the entire Terminator series, just about every season of 24 and Hell Comes to Frogtown. Even the stupid song that I stole the title of this column from all deal with some crackpot deciding he wants to press a button and wipe out everything—all the farmers markets and baseball stadiums and just-simply-adorable brunch spots and everything. That hottie in chemistry class, too. Why would someone want to go ahead and do that?

Nuclear death has been one of my most recurring nightmares (it’s actually second behind zombies…fucking zombies). I’m sick of worrying about it! I have other things I should be worrying about, like, finding a dentist and making preparations for old age and whether or not that nagging pain that I sometimes get in my knee when it rains means that I might have to get my leg partially amputated at some point down the road. Now you want to throw complete annihilation of the planet on top of all that? Nuh-uh. Fuck you, bro. I’m not having it.

Now we’re tasking John Kerry (Mr. Fucking Personality) with furthering disarmament talks with the North Koreans. “We’re prepared to reach out,” Kerry was quoted as saying in an article on Washingtonpost.com, given “the appropriate moment and the appropriate circumstance.” Whatever that’s supposed to mean.

An unnamed official quoted in the same article tried to clarify Kerry’s remarks with, “Our position hasn’t changed, and there are no plans to move toward direct talks, because North Korea has shown no willingness to move in a positive direction.”

Like, not for anything, but has North Korea ever showed willingness to do anything? It seems like someone from our government is always trying to “further talks,” which just sounds like politician speak for not talking at all, with South Korea’s wacky neighbor, and then everything gets quiet for a little while, and then some video emerges from Pyongyang with all these soldiers doing this crazy marching shit and flowers and giant colorful posters and anti-everyone-who’s-not-North-Korean rhetoric. Only Dennis Rodman has actually gone over there to see what’s up. I don’t know, maybe we can just hire him as the ambassador over there or something. He can teach Kim Jong-un how to rebound, and he’ll be so stoked that he won’t even think about nuclear weapons again.

But, seriously, I’m over it. Just figure it the fuck out or don’t. I don’t care at all at this point. If it were up to me, I’d probably just get on the phone to Pyongyang and say, “Look. If you really want to do this, just go ahead. Push the button so we can all see who picked the right God.” Once we had that question answered, I guess everyone would stop bickering in the Middle East, so, you know, two birds with one stone.