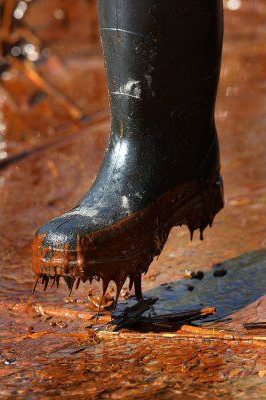 Oh black gold, Texas tea, starter of wars, destroyer of oceans, why must you bend us over the very receptacle in which you come and rape us at every given opportunity? It’s like, we go out and fight all these wars in the Middle East because we love you, and you turn around and shit in our gulf. That’s right, thanks to BP/Halliburton/Transocean/Obama with the C4 in the deep-sea diving suit, oil is spewing into the Gulf of Mexico at a rate of about 5000 barrels a day. BP can’t seem to get their shit together, so I think we are living with this for a while. Since the politicians will undoubtedly fuck this one up as well, I’m going to throw out a few ideas for how we live with this bowl full of black cherries.

Let’s face facts, New Orleans is still reeling from Katrina. Add several thousand barrels of oil into the mix, and they are going to need something new to draw in tourists. The first thing that popped into my head was a carnival. BP’s Land O’ Crude would be an excellent way to kick-start that economy. There could be jet boat tours of the spill and various wildlife degreasing booths. You haven’t had fun until you’ve cruised the awesome city-sized, bumper car slick track! And who wouldn’t want to take a couple shots at dunking the BP Exec in a tub of oil?

The carnival probably wouldn’t meet EPA approval, but we could always sell the gulf to the Somali pirates. This is not as crazy as it may at first seem. As I’ve written about in the past, these pirates are jackin’ all kinds of loot in the Gulf of Aden. To better protect our interest, we could offer them a trade: the pirates get the Gulf of Mexico (where historically, pirates are supposed to be anyway) in exchange for U.S. control of the shipping lanes. The ignorant pirates won’t know what’s going on until after they get here and find a vast lifeless wasteland. Meanwhile we are collecting tolls, paying down the national debt and basically ballin’ out of control.

If we can’t sell or trade the gulf, we could give it away. I suggest we give it to the people who want it so bad. Republicans have been screaming about offshore drilling forever. They’d also like to keep the regulations loose so as not to dip into those slim profit margins that the always-teetering oil industry barely pulls off each year. You like oil, dipshits? Well here is, literally, a whole mess of it! Sara Palin wants to be president of something and loves drilling. Have at it, bitch. We’ll even throw in a few states to sweeten the deal.

Eventually we are going to have to abandon the Gulf States. I’ve been advocating this for a long time, so this is the least offensive option to me. Louisiana is a disaster magnet and worse yet, it’s the home of the dreaded Emeril Lagasse. Florida contains only morons, criminals, models, strippers and old people–‘nuff said. Mississippi is full of rednecks and has way too many Is in it. Texas is, well…Texas. And finally, Alabama should be axed for dipping its big toe into the cesspool with these other degenerates. As you can clearly see, we should have abandoned these states already. I guess Texas is big enough that we could chop off a piece and keep it. Unfortunately, all the “good” cities would be left behind. If we do chop it up, we probably should give a piece to Mexico since we jacked their shit up too.

However, instead of helping, we could do what we usually do to Mexico and screw them. I call this the Arizona option and it goes like this: If it looks Mexican and it doesn’t have papers, then back it goes. Last I checked, it was called the Gulf of Mexico. Even if it did have papers, they would be covered in oil and rendered illegible and invalid. Looks like we are going to have to send this one back to where it came from!

So, there it is, America. You now have five solid options for dealing with the new Dirty South. Hopefully we won’t need them, but I think it’s best to be prepared. I know, I know… you’re welcome.