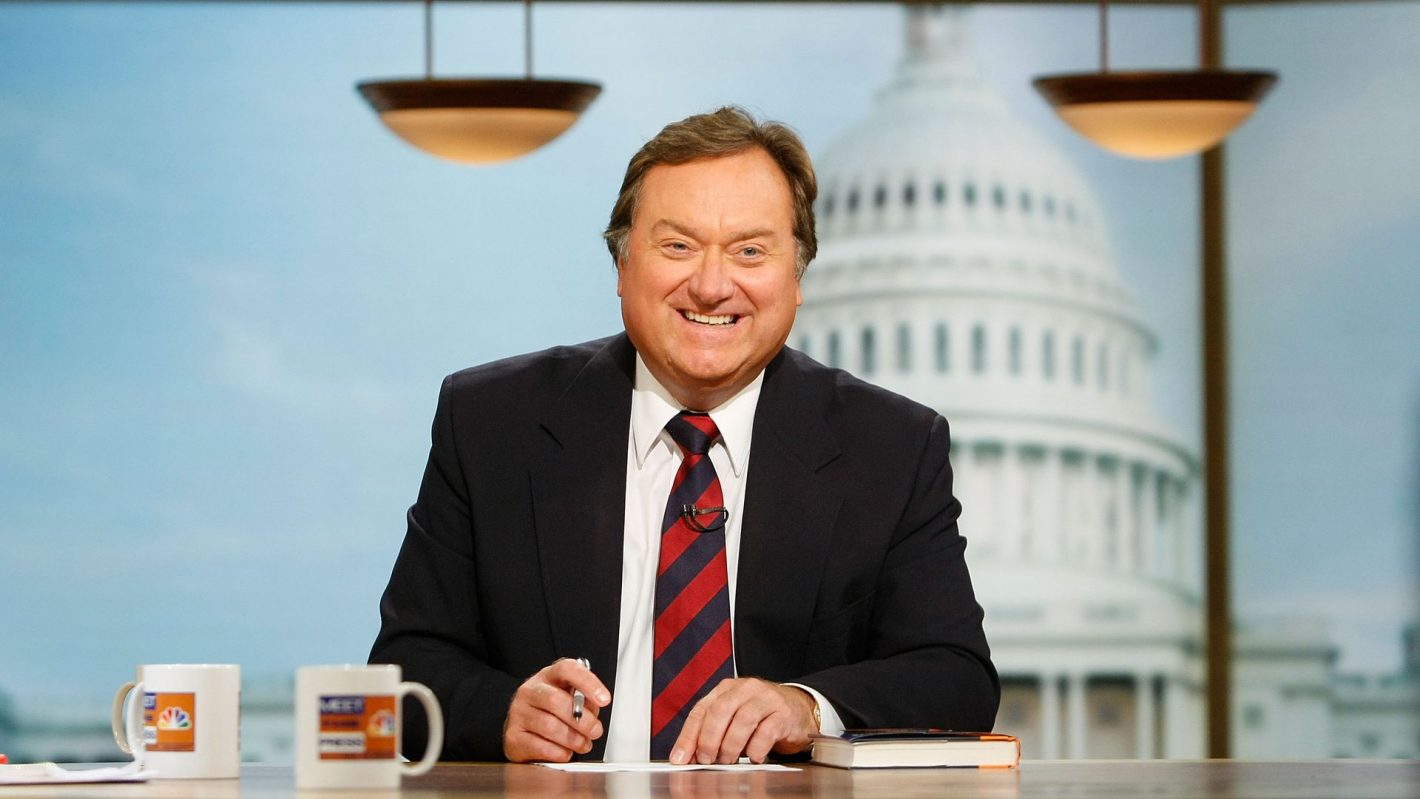 The Sunday morning news show circuit used to be serious business. Gravelly voiced, hoity-toity-type folks would field tough, probing inquiries from shrewd journalist-types. You’d get facts and information and something to soothe the hangover you’d no doubt acquired through binge drinking the night before. I mean, why else would you be watching Meet the Press if you couldn’t handle anything above a 2 on the excitement scale? Sip that coffee. Breathe deep. Watch the dusty wheels of democracy grind a few degrees clockwise for an hour or so. Shower—maybe, it should be optional on a Sunday—feel human again.

If you’re boring like me, you probably remember Timothy Russert fondly. He was the longest-standing host of Meet the Press, serving the American public for 16 years. Russert was cool, because he was friendly, had a nose for bullshit and also lended a modicum of boyish enthusiasm to his job. He made a big splash in 2000 during NBC’s election night coverage when he busted out a dry erase board and giddily—and perhaps punch drunk—scrawled “Florida, Florida, Florida” as the Hanging Chad State wobbled between eventual president-elect George W. Bush and former Vice President Al Gore. Some of you reading this may not have even been alive when that happened, but at the time, we thought presidential elections couldn’t get any weirder than it did that year.

But the predominant phrase that’s been running through my head so far in 2019 is “This is where we are now.” I’ve heard it echoed in various ways throughout the media. So this past week, our president was in Japan, meeting with dignitaries, wearing ill-fitting suits, saying wildly inaccurate shit. You know, the usual. I have to hand it to this administration, though, because they consistently deliver on my woefully low expectations of their ability to handle just about any situation.

I keep hoping that the bonkers shit that comes out of the White House will eventually lose its ability to surprise me. I’m trying my best here. I don’t want to do something crazy like start a Twitter account and go off with the tweets. But then there’s this naval destroyer with John McCain’s name on it. It’s parked in Japan. Fine. Naval ships get named for all kinds of things. There’s a submarine named for Key West, which I’ve heard is lovely; Portland, Oregon got an amphibious transport dock ship named after it, which sounds hipster AF; and then there’s an aircraft carrier named after Gerald Ford and a submarine called Jimmy Carter, because I guess every president gets a boat eventually.

I wouldn’t even have known that the John S. McCain was parked in Japan if someone at the White House didn’t go into a hissy about it. Whoever it was sent an email saying the destroyer should be moved or its signs covered up, because they didn’t want Our Fearless Leader to get bummed to see his dead rival’s name on a boat. I figured this had to be a joke, or something like that. Like it had to be something overblown or misconstrued. Apparently, the Navy confirmed that it received a request to “minimize the visibility” of the USS John S. McCain.

I couldn’t imagine being a ranking naval officer and fielding a request like this. What do you do with it? Do you call David Copperfield? Do you send it on an impromptu jaunt around the Sea of Japan in search of Godzilla?

This brings us to this Sunday’s Meet the Press, which has basically become The Jerry Springer Show thanks to the experimental word jazz put forth by Rudy Giuliani et al. This time it was acting White House Chief of Staff Mick Mulvaney’s turn to noodle off some impromptu riffs. When asked about the whole boat thing, Mulvaney said, “The fact that some 23- or 24-year-old person went to that site and said, ‘Oh my goodness, there’s the John McCain, we all know how the president feels about the former senator, maybe that’s not the best backdrop; can somebody look into moving it,’ that’s not an unreasonable thing to ask.”

I wonder what Mr. Russert would have written on his dry erase board when confronted with a comment like this. I imagine it wouldn’t have been appropriate for Sunday morning.