Google can go fuck itself.

I realize I write that at great personal peril. They have spy cameras everywhere—on Earth, Mars and now their eyes are underwater. And they’ve found something. Or not.

Over 2,000 years ago, Greek philosopher Plato wrote of an island, a doomed technological utopia named Atlantis. He introduced the mysterious place in his dialogs Timaeus and Critias, written around 360 B.C. Despite being citizens of a utopian society, Atlanteans were total dicks. Plato wrote that—some 9,000 years before his time—Atlantis was raging war against Athens and other ancient world hotspots, enslaving people as it went. But before it could realize its plans for world domination, Atlantis got its ass sunk into the ocean on a “single day and night of misfortune.” I’d say so.

Since then, Atlantis has been the stuff of legends. Did it really exist? If it did, how come there’s no trace of it?

To me, the answer to that age-old question is simple. Of course it existed. Plato said so. I mean, he’s fucking Plato. The guy is older than Jesus and we’re still talking about him. It’s not because he married some banging Grecian babe or flashed his vagina to the paparazzi either. It’s because Plato knew his shit.

Recently, U.K. tabloid The Sun reported that an aeronautical engineer from Chester, England, found what looked like a city grid beneath the surface of the Atlantic Ocean, off the west coast of Africa. According to The Sun (via Foxnews.com), the grid-shaped pattern believed to be Atlantis coincided with the location “seemingly suggested by the ancient philospher Plato.”

People were excited, but along came know-it-all Google to rain on everyone’s parade.

Soon after the world became abuzz with reports that the “lost continent” may have finally been found, a Google spokesperson told the press that the strange discovery was simply just “an artifact of the data-collection process.” 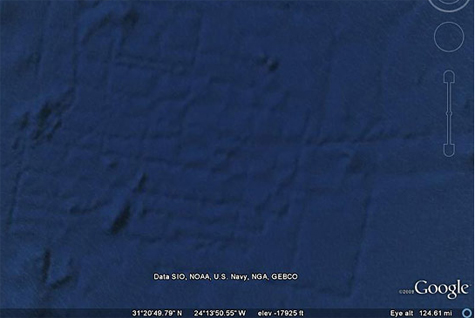 I call bullshit. If this “artifact” is such a common occurrence, how come it doesn’t show up on other parts of the underwater map? (It might, I didn’t check. But if it does, then there just may be more underwater cities, like The Snorks or something.)

I smell a conspiracy. Could you imagine what it would be like if it got out that Atlantis had been discovered? People would freak out. It would threaten the very fabric of our society. History books would have to be rewritten. We’d have to reconsider our preconceived notions of the ancient world. The wheels of power and oppression would grind to a halt, just like in The DaVinci Code. Wouldn’t it? Whatever, it could. If it couldn’t, then why not just tell the truth?

I’m not the only one who feels this way. In reaction to Google’s statement, AOL News quoted a Digg blogger as saying, “OMG, this is incredible! I smell a cover up!” Here, here! I mean, yeah, a blogger may not be as credible as Plato, but who knows? You have to give it a couple thousand years before you can judge.

When I see the image of the ghostly grid, I see a pet shop on the corner, a cafÃƒÂ© down the street where young men and women would flirt over coffee, or perhaps chat about current events over scones. I see a homeless Atlantean, asking for change. You know, it just takes a little imagination. I’m sure Atlanteans had plenty of that, even though they’d never heard of Google.