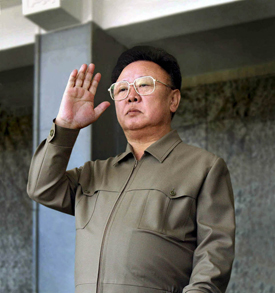 As if 2011 didn’t have enough notable deaths, Kim Jong Il kicked the proverbial bucket on Dec. 17, 2011. The enigmatic and charismatically bonkers world leader ruled North Korea for 17 years before dying of a heart attack at age 69. He took over the reins of the reclusive Asian country in 1994 from the country’s previous leader and Jong Il’s father, Kim Il Sung, who coincidentally also died of a heart attack (the elder Kim made it into his eighties, though).

Around the table on Christmas Eve, after a couple of glasses of wine, a relative showed me a YouTube video of North Koreans mourning the loss of their great leader. I’m painfully cordial at dinner tables, especially during the holidays. Death is not something that I find polite to discuss. The only thing less polite would be to converse about politics. But the video sure was striking. One image from the video particularly struck me. It was of a man crying–just bawling–on the steps of what I assumed was a government building.

“Can you believe it?” my relative asked.

Given the press Kim Jong Il has gotten on this side of the Pacific, it’d be difficult to believe that anyone would shed a tear over his passing. Yet, here this man was, sobbing so openly you’d think it was his wife or mother. It made me think about how relative everything is. Who knows? Perhaps this reaction was a calculated piece of propaganda to either show that Jong Il was beloved by his people; or, maybe it was a device wielded by those to prove the opposite–that the people of North Korea are so brainwashed that they thought the fruit bat who led them was someone likened to a god.

Even gods die, though. Just ask Zeus. The world wondered if the death of the country’s supreme leader would leave a power vacuum in North Korea. These thoughts were laid to rest on Dec. 29, 2011 as Kim Jong Un, Jong Il’s son, was named as his father’s successor. In fact, he was even dubbed “The Great Successor,” which may very well be the coolest title a world leader can have.

According to an article on SFGate.com, Kim Yong Nam, North Korean Chairman of the Presidium of the Supreme People’s Assembly (I’ll take it back, that is the coolest title a world leader can have) said of Jong Un, “Respected Comrade Kim Jong Un is our party, military and country’s supreme leader who inherits great comrade Kim Jong Il’s ideology, leadership, character, virtues, grit and courage.”

So Yong Nam not only has a cool title, but he’s also not shy with the adjectives. I’ve always been fascinated by the North Korean supreme leader, simply because the stories you hear about the country seem so deliciously fictitious. It’s like something out of a surrealist novel, or maybe even an epic poem. When I first heard the news of his death, my knee-jerk reaction was that it was some kind of hoax. Really, I sort of hoped it was, because as crazy as he might have been, his image–the Elvis hair, stoic face and outlandish clothing–made the world more interesting. I wasn’t the only one who thought so. Even as Jong Un was being named the new supreme leader, Kim Jong Il souvenir sales surged just across the North Korean border into China, according to an article published by the Agency France-Presse. One such vendor of these trinkets stated that she had sold “50 to 60 lapel pins every day during the 13-day mourning period” after Jong Il’s death. Any way you slice it, he certainly had an effect on people.

Who knows what legends will surround the new guy, but he certainly got his career off to a memorable start, one already clouded by conjecture. The Great Successor was unveiled at a massive memorial service for his father that saw hundreds of thousands of people converge upon Kim Il Sung Square in Pyongyang to pledge their fealty and support to the country’s new leader, according to SFGate.com. Strangely enough, CBS News reported that “Tens of thousands” attended the same memorial.

I guess the passing of Kim Jong Il and the tale of his successor are like many other things in life. It’s all about what you want to believe–like Santa Claus, or Balloon Boy, or that watching The Jersey Shore on a regular basis doesn’t make you a terrible person. I’d wager there’s probably a little bit of truth in everything, no matter how bizarre, vile or improbably wonderful, which is most likely why the world is such a fascinating place. Rest in peace, KJI, or some semblance thereof.