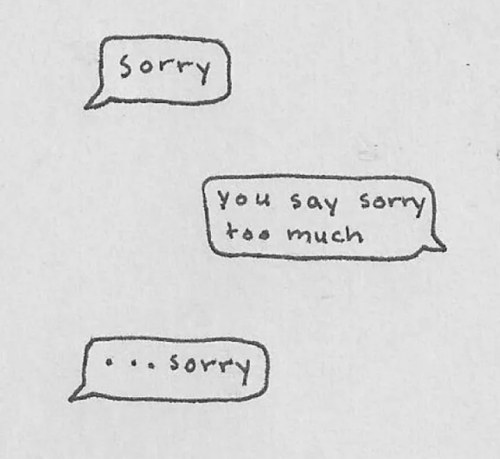 Sorry is a very difficult thing to say. Unless you’re me. I say sorry all the time. I’m not sure if it was my Catholic upbringing or not, but if something goes wrong and I’m in the general vicinity, whether it was my fault or not, I feel the need to apologize. That’s probably why I never went into politics.

Being a politician is like being in love: It means you never have to say you’re sorry. Politicians fuck up all the time, and they never apologize for it. It’s like they drive through life in cars without rearview mirrors. It doesn’t matter how many people they run over along the way, just so long as they keep it moving.

There’s probably a good reason for this. If you apologize for something, you’re admitting you’ve done something wrong, which is way worse than actually doing something wrong. For example, my fiancée hates it when I don’t refill the Brita water pitcher and leave it in the fridge (or even worse, the countertop) next-to or completely empty. When she encounters this near-daily annoyance, she scolds me with a pointed, “Babe …” to which I promptly reply sorry, because I know I’ve done something wrong. My acknowledgment of the fact that I have erred only validates her belief that my not filling the water pitcher is incorrect behavior; therefore, it most likely creates neural pathways in the brain that become irritated whenever she sees the empty pitcher on the countertop. I’m not a neuroscientist or whatever, but that’s my best guess.

Now, If I had flipped the script and instead of apologizing said something like, “Oh, I meant to do that,” then those pathways might not have formed. She might be confused at first, thinking that the empty pitcher was undesirable. But without my admittance of culpability, she may have been led to believe that empty Brita pitchers weren’t all that bad a thing, thus creating a calmer kitchen environment in our one-bedroom household.

This is probably why people like Donald Trump so much. He never apologizes for anything, no matter what he does or says. He’ll tell us that Mexicans are mean rapists, and we’ll be all, “Hey, no they’re not!” and demand an apology. Then he refuses, like, “Hey, what did I do?” and then we’re all, “BUT! … Oh well. He’s already moved on to the next dumb shit he’s going to say anyway.” He probably knows that saying sorry for anything will only create more anger.

It’s like that thing about trees falling in the woods. If you weren’t there, did it make a sound? If you don’t say you did something wrong, did you?

Remember 12 years ago when a U.S.-led coalition invaded Iraq because then-President George W. Bush said they were developing weapons of mass destruction? And then everyone found out that they weren’t? And then Cheney and Rumsfeld and Bush and them were all, “Well, we had this intelligence …” Fingers were pointed, sure. There was plenty of blame to go around, but no one said, “Hey, my bad, guys,” even though they probably should have.

In the end, though, no one really cared, because the coalition was able to oust Saddam Hussein, who we would probably all agree was a piece of shit (God rest his soul). And getting rid of him was awesome because it solved all the problems in the Middle East and Iraq has enjoyed a stable government and peace in the 12 years since …

But then Tony Blair had to come along and ruin everything. The former British Prime Minister went and opened his stupid British mouth recently to say sorry for that whole Iraq war kerfluffle.

“I apologize for the fact that the intelligence we received was wrong,” Blair said in a CNN interview. “The program in the form that we thought it was did not exist in the way that we thought.”

He also acknowledged the war’s role in the rise of ISIS. “I also apologize for some of the mistakes in planning and, certainly, our mistake in our understanding of what would happen once you removed the regime,” he said.

Way to go, dude. Here we were, all of us thinking everything was just hunky-dory, and you had to blow the whole thing. Can we get a do-over?